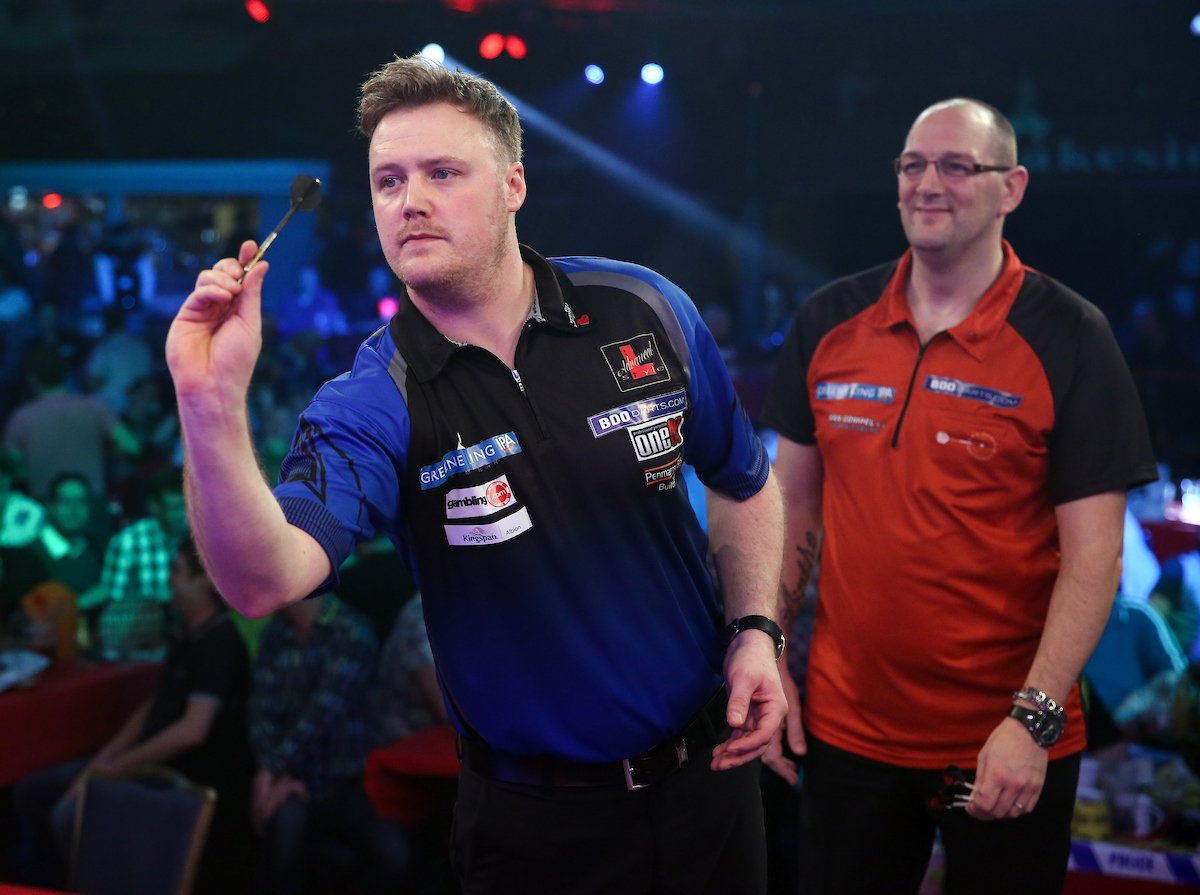 Andy Hamilton’s big BDO debut ended in defeat on the third day of the 2019 BDO World Championship at Lakeside, as ‘The Hammer’ was swept aside 3-0 by Canadian ace David Cameron in their preliminary round game.

In the opening game of the afternoon session it was Cameron, making his sixth Lakeside appearance, who looked more comfortable. Cameron drew first blood with a 60 checkout, only for Hamilton to fire back with a 14-darter. Cameron then matched his feat with a 14-darter of his own, followed by a 15-dart leg to race into a one set lead. Cameron was then able to pull clear in the second and third sets, highlighted by a 13-darter in set two and a 91 finish on the bullseye in set three. Cameron, who finished with 36% on the double and an average of 86.13, now faces Gary Robson in the last 32.

In the final preliminary round game of this year’s tournament, it was Serbia’s Oliver Ferenc who sprang a minor upset in the battle of the debutants against Ryan Hogarth. The Serb took the opening leg of the match with a 15-darter and was able to take the first set with relative ease, Hogarth failing to connect with a double until mid-way through the second set. The Scot, ranked inside the BDO top 50 after a strong second half of the season, did take the second set but he won just one more leg in the match as Ferenc hit a 143 checkout along the way to a fairly comfortable 3-1 victory. Ferenc now plays 2015 champion Scott Mitchell tomorrow.

Willem Mandigers took the spoils in the final game of the afternoon session, beating Paul Hogan in a peculiar contest. Despite hitting a 12-darter in the first set and averaging almost six points more than his Dutch opponent, Hogan’s issues on the doubles meant that he won just three games in the entire contest. Mandigers, to his credit, was clinical when given the opportunities and secured a share of the £5,000 bonus for the highest checkout by nailing a 160 in the first set. Mandigers now faces a tough test against his compatriot Wesley Harms in the last 16.

Justin Thompson was one of the standout performers on Saturday in his victory over Mal Cuming and he once again gave a good account of himself in the evening session, eventually going down 3-2 to the 2018 semi-finalist Michael Unterbuchner. Both men hit four 180’s in a contest that was highly competitive but one that never really had the drama of some previous contests. Unterbuchner took sets 1 and 3, hitting successive 13 and 14-darters in the latter, but it was set four that was the most impressive. Unterbuchner took out a 121 checkout, but Thompson responded with two 14-darters, one ending on 76, to taking it to a fifth set decider. Unterbuchner took that fifth set 3-1, finishing up with an average just over 90 and moving on to a last 16 clash with Wayne Warren.

In the sole women’s game of the day, three-time champion Anastasia Dobromyslova blew past debutant Laura Turner in impressive fashion. Dobromyslova, fresh off her appearance at the recent PDC World Championship at Alexandra Palace, seemed somewhat disappointed with a performance that saw her hit one maximum, eight 140s and finish with an average slightly below 82. Turner, by contrast, seemed to struggle on debut and didn’t get a single dart a double.

The penultimate game of the day was possibly the best game of the tournament so far, as Jim Williams overcame a real challenge from Roger Janssen to progress into the last 16. Janssen came out of the blocks firing on all cyclinders, taking the first set with 100% on his doubles and an average in the mid-90s. Williams responded appropriately in set two, taking out an 11-darter on the way to levelling the match at the break despite Janssen beginning that set with an 15-darter finishing on 101. Set three also went the way of the big Belgian, but his form dipped in the second half of the match, winning just one leg in the last two sets. Williams took out a 16-darter and a 13-darter in the deciding set, finishing up with an average of 92.26 and 39% on the double. To his credit, Janssen played his part in a great game and surprised an awful lot of people with his performances against Williams and Wouter Vaes.

The length of both men’s games in the evening session meant that Daniel Day and Dean Reynolds didn’t come onto the stage to play until almost 11pm, but they received one of the best receptions of the night in an entertaining encounter. Day opened the game with a 15-darter but Reynolds reeled off three legs on the spin to take set one, finishing off with a tops-tops 100 checkout. Some wayward finishing in set two cost 14th seed Day, with Reynolds again taking it 3-1 to move two sets clear at the first break. Day’s finishing improved in set three, taking out 15-, 17- and 14-darters, including his match-best finish of 97, to get himself on the board. Set five had a very tense feel to it, with both men missing doubles and scoring well in parts, but in the end it was Reynolds who edged it, highlighted by a great 130 checkout in leg three. Reynolds, whose final average was a mere 76.55, will need to improve for his last 16 game against fellow countryman Jim Williams.

INTERVIEW: ‘Winning the title is the only dream’ says Surrey’s Parletti

Durrant and Mitchell impress on Day Four at Lakeside