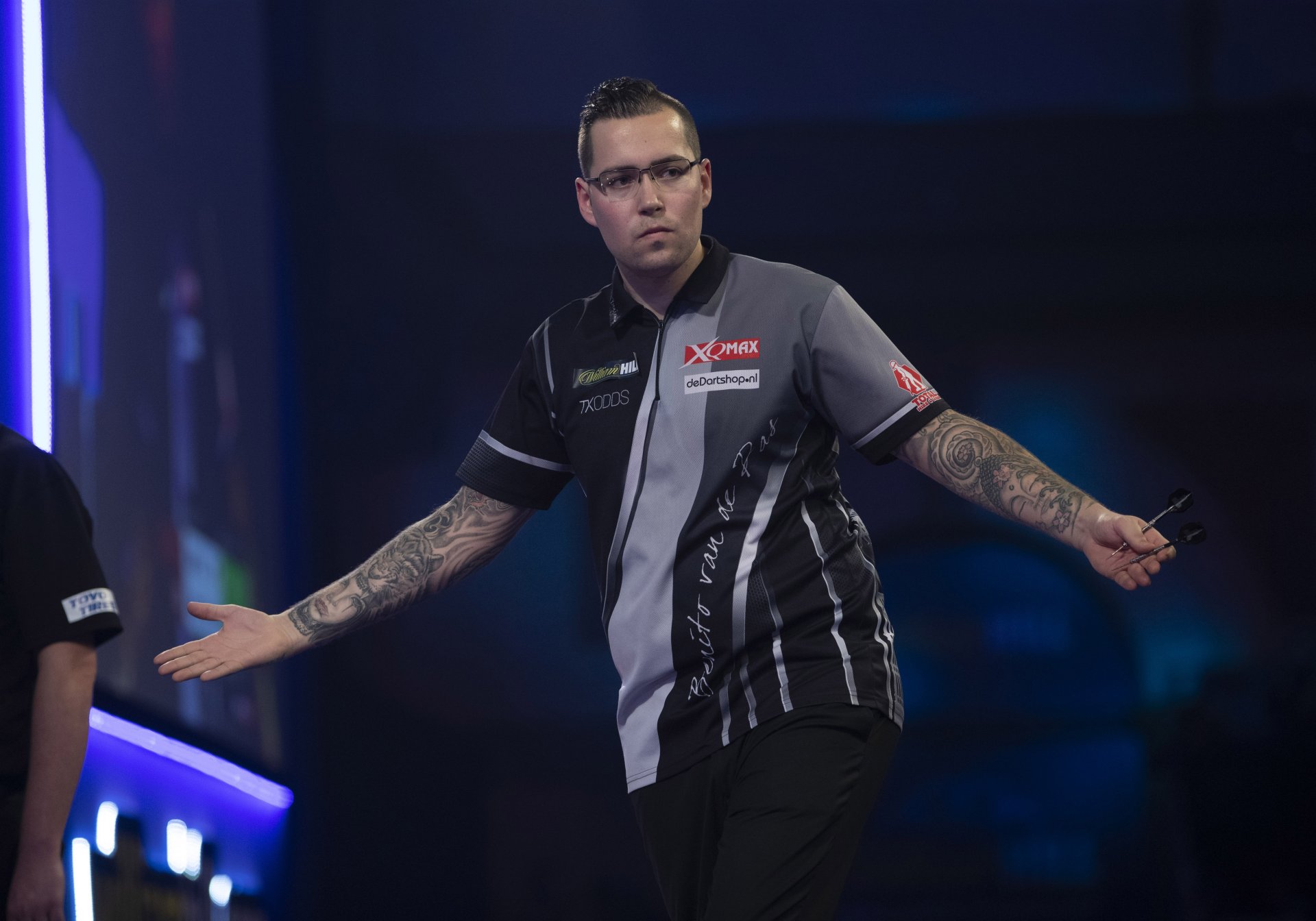 Benito van de Pas survived four match darts on his way to a 3-2 win over Gabriel Clemens, while Stephen Bunting came through a thriller on day six of the PDC World Darts Championship.

It was another narrow victory for ‘Big Ben’ at the Alexandra Palace after his dogged run to the last 16 last year, all coming on the back of very poor years on the ProTour.

James Wade produced an archetypal performance to beat Ritchie Edhouse 3-0 despite having a lower average, and Nico Kurz missed double 12 for the nine-darter en route to success against James Wilson.

Elsewhere, Harry Ward came from nowhere to see off Madars Razma in a game of two debutants, while Josh Payne played excellently in a straight sets win over Diogo Portela.

A scrappy start from Clemens was quickly put to bed against Van de Pas, who found a 12-dart leg to lead the first set 2-1 only to squander five match darts and hand the first set to the Dutchman in a match of missed doubles.

However, ‘The German Giant’ showed his best form more consistently in set two, reeling off three legs before Van de Pas re-took the lead with a 13-darter to take the third 3-1.

A brilliant fourth set went the way of Clemens, the German averaging 114 for the four legs, but after he went within one of the match, former top-16 star Van de Pas won three legs on the spin having survived four match darts to deny us an all-German clash between Clemens and world number 24 Max Hopp.

Although Clemens won more legs than Hopp, he squandered chances at crucial moments and Van de Pas capitalised. Similarly, Stephen Bunting’s clutch finishing eventually got him over the line in an all-time classic against Spain’s Jose Justicia.

‘The Joker’ carried on where he left off in his first round match against Arron Monk, a 128 finish proving crucial in sealing the first set in 4 legs despite a 102 average from ‘The Bullet’.

Bunting replied in set two by the same scoreline, and produced an excellent comeback in the third to win three consecutive legs and lead 2-1 in sets.

The match’s topsy-turvy nature continued set four as Justicia regained his form to send it to the final set, and Bunting went 2-0 up to give himself a chance to close it out.

A missed match dart allowed Justicia back in, and two more were squandered in the next leg to allow his opponent to send it into the tiebreak scenario, where someone had to win by two clear legs until it got to 5-5.

Six legs both high in quality in tension followed as both men looked like winning at various stages, but Bunting broke throw in the tenth leg to win the match, a brilliant 64 finish sealing his first win at the PDC World Championship for four years.

James Wade only missed one dart at double in his first set with Ritchie Edhouse, taking it 3-2, and a similar display followed for the rest of the match. ‘The Machine’ came from behind in both of the following sets to seal a Wade-like victory with 64% on the doubles.

James Wilson saw it as a bonus just to be at Ally Pally after the year he’s had, but Nico Kurz had no room for sentiment as dismissed him 3-1 to book a meeting with Joe Cullen.

Diogo Portela only won two legs against Josh Payne after an efficient performance from ‘The Maximum, and Harry Ward recovered from losing six straight legs to seal a second round clash against Simon Whitlock.

Ron Meulenkamp and Seigo Asada also secured comfortable 3-0 wins against Ben Robb and Mickey Mansell respectively to both reach the last 64 for the second year running. Robb’s 170 finish, the third of the tournament, was a rare high point for the Kiwi.

Thursday sees the final two first round games played with Justin Pipe among those in action, while John Henderson, Steve Beaton, Dave Chisnall and second favourite for the title all enter the fray as seeded players.