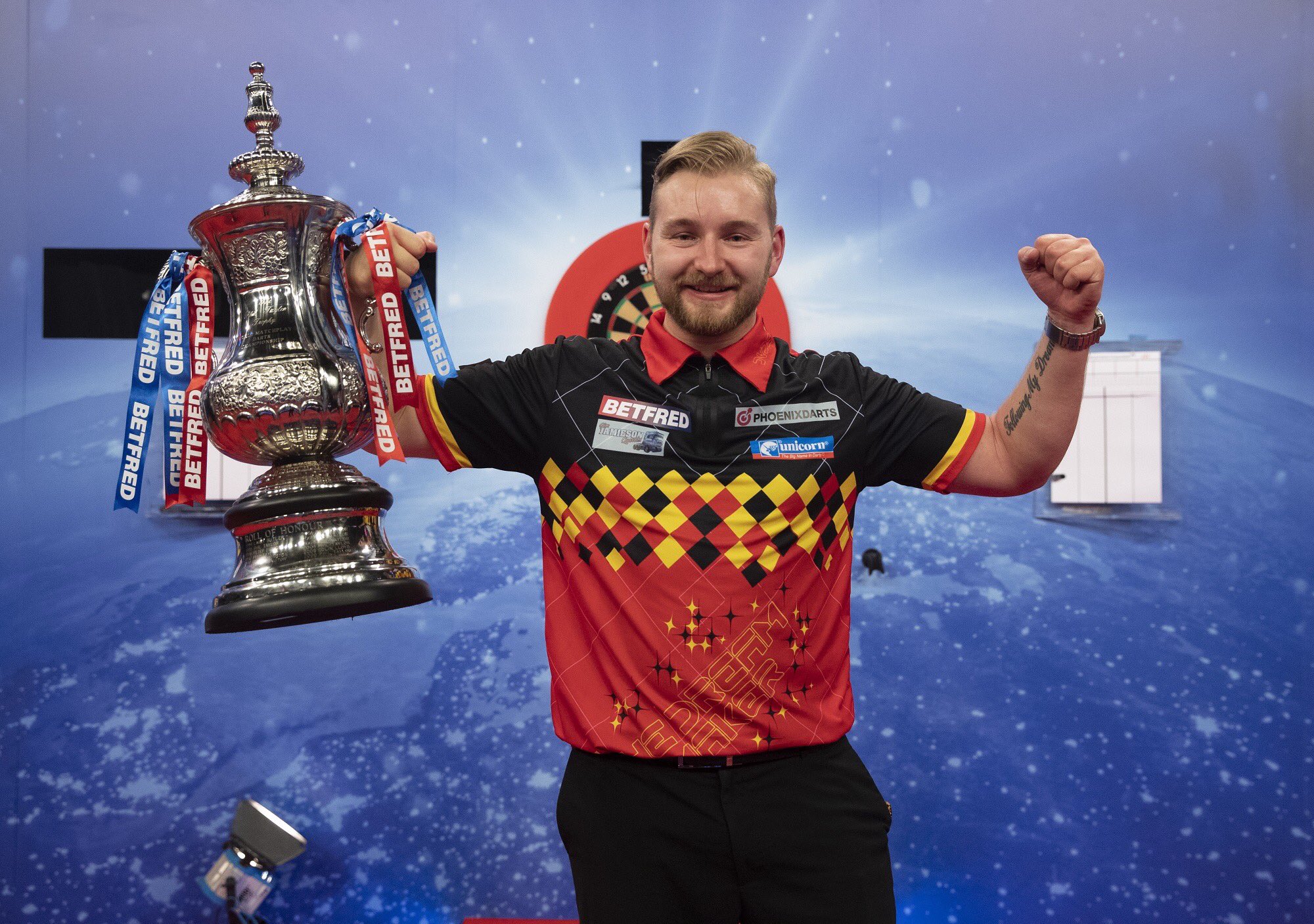 Dimitri Van den Bergh scooped his maiden major honour as the Belgian was crowned the Betfred World Matchplay champion on Sunday evening at the Marshall Arena in Milton Keynes.

Inspired by a flurry of ton-plus checkouts and remaining composed during the most significant match of his promising career, a nerveless Van den Bergh defeated former champion Gary Anderson 18-10 to seal a stunning victory.

A rather different World Matchplay in terms of both environment and surroundings saw the world number one Michael van Gerwen, world champion Peter Wright and defending champion Rob Cross depart prior to the quarter-finals, with a new name unsurprisingly being etched on the Phil Taylor Trophy. 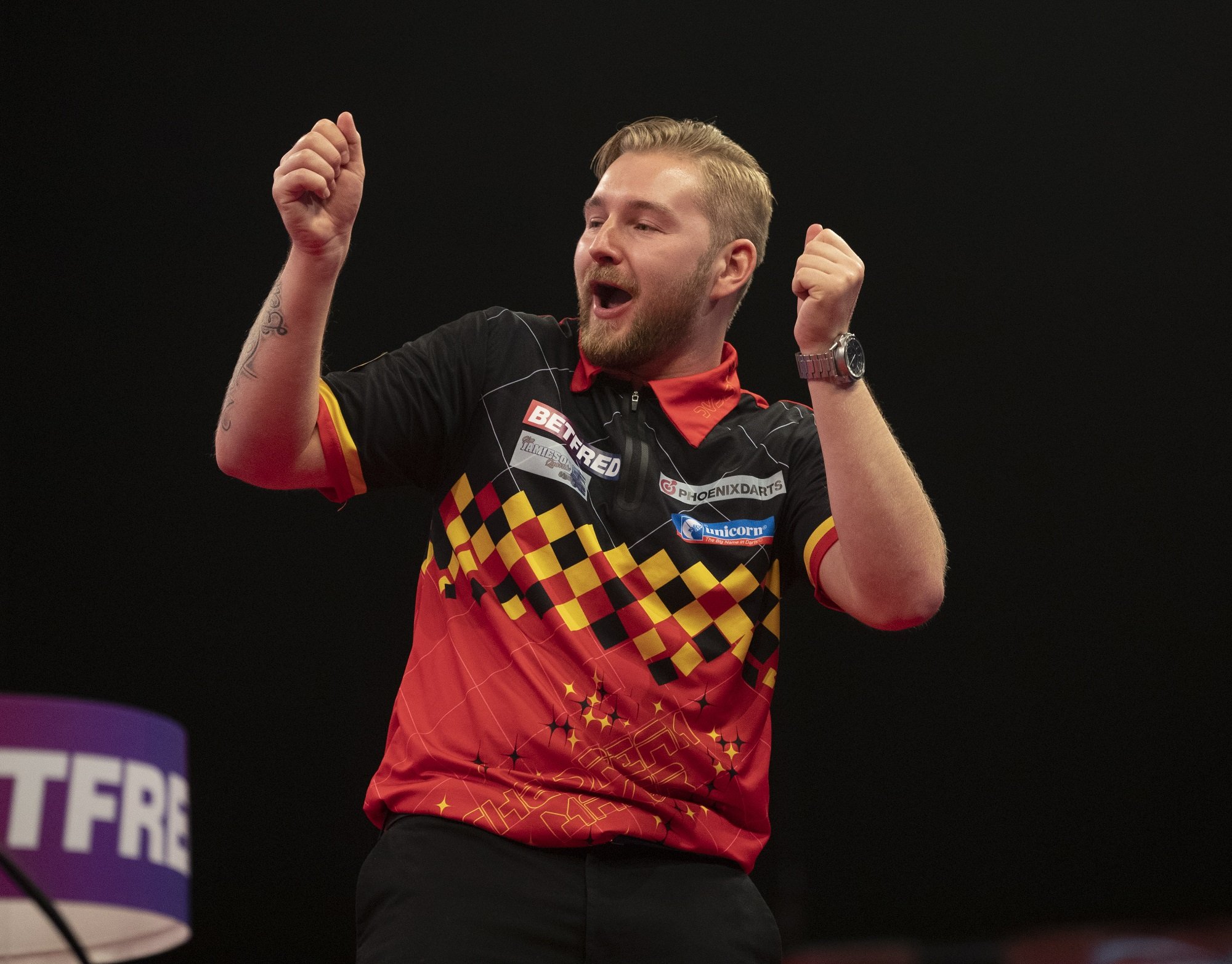 Van den Bergh overcame Nathan Aspinall, Joe Cullen and multiple-time world champions Adrian Lewis and Glen Durrant on his way to the final, before adding to an impressive haul of scalps with victory over the esteemed Anderson in a relatively one-sided finale.

“My dreams have come true, what a beautiful trophy, I’m so happy,” said Van den Bergh – a 100/1 outsider before the tournament commenced in Milton Keynes.

“I have so much respect for Gary, to beat him is showing me how far I have come and now I know I can win, I can’t believe this.

“The world is going through a very difficult time and the PDC, Barry Hearn and Matthew Porter have given me a chance to live my dreams when it hasn’t been possible for others, so thank you to them.”

Nervy opening exchanges saw both players struggle and average below the 90 mark, with Anderson squandering the opportunity to construct a 3-1 lead, and instead Van den Bergh holding a slender advantage at the first interval.

As standards began to increase in the second session, Van den Bergh converted his first of many ton-plus finishes as the Belgian found the bullseye for a mesmerising 121 checkout to lead 5-4.

However, Anderson turned the tables with combination checkouts of 61 and 130 to lead for just the second time, only for Van den Bergh to find the middle of the board once again to execute a mesmerising 170 checkout and restore parity at six apiece.

Brilliant from Dimitri Van den Bergh as he immediately breaks back by spearing the biggest fish of the lot ? pic.twitter.com/8wA6GDWaTt

After reeling in a potentially tide-turning checkout on the bullseye, Van den Bergh began to seize control as he claimed four of the next five legs to move 10-7 ahead of the struggling Scotsman.

Nevertheless, the two-time world champion’s aspirations of a second World Matchplay crown were short-lived. Van den Bergh reeled off five legs in succession, including impressive checkouts of 124 and 132 on the bullseye, to cruise closer to a monumental triumph.

Anderson then claimed two of the next three legs to make the scoreline slightly more respectable, though, missed doubles from the the Scotsman handed Van den Bergh his maiden major accolade.

An incredible performance from the Belgian on his debut year to beat Gary Anderson and become the 2020 Betfred World Matchplay Champion! pic.twitter.com/U9PcWPnd5P

The two-time world youth champion trousers the £150,000 winner’s cheque courtesy of his exploits – which escalates the Belgian into the world’s top 16 and firmly strengthens his chances of Premier League Darts selection.

Van den Bergh becomes the first debutant to lift the trophy since Larry Butler in 1994, and secures a monumental landmark for his country as Belgium’s first major PDC ranking event winner.

Following a successful nine days of action at the Marshall Arena, televised darts returns in little less than a month as Premier League Darts recommences behind closed doors at the same venue.