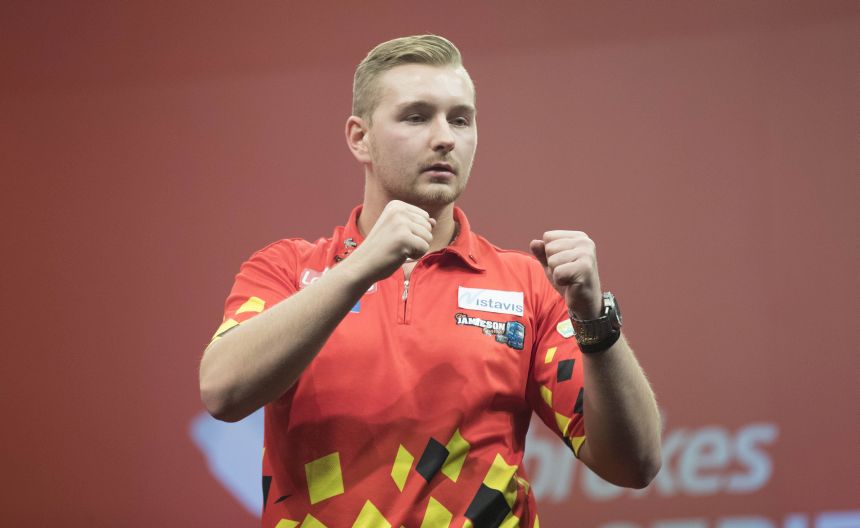 Dimitri Van den Bergh has been unable to return to his native Belgium amid growing concerns of coronavirus in the country, and is currently cohabiting with a fellow world champion.

The former back-to-back world youth champion participated in the latest PDC ProTour weekend just under two weeks ago, with the Belgian borders having since been closed.

Fortunately, for the youngster, reigning champion of the world Peter Wright and his wife Joanne were on hand to provide him with the support and accommodation he needed during this tough period.

“Dimitri [Van den Bergh] is staying with us,” Wright told the Darts Show Podcast. “We’ve been helping him out and he’s helped me out with a bit of practice every now and again. Two world champions practising together can’t be bad.

“It’s a bit tough – he was wants to go home and see his parents, stuff like that. And his brothers. It’s tough on him but he’s thinking of moving to the UK soon anyway to try the darts 110 per cent. Being UK-based gives him a taster, I suppose.”

Wright has been keeping busy in and around his Suffolk home, having taken down the Christmas decorations and keeping his chicken coop neat and tidy, alongside Van den Bergh.

“We were out [on the farm] collecting eggs the other day, I said: ‘your job is not to drop them’, so he’s having fun.”

Van den Bergh is hoping to return to his country of birth at the nearest opportunity, while Wright is enjoying his break, completing jobs he usually doesn’t have the time to complete.