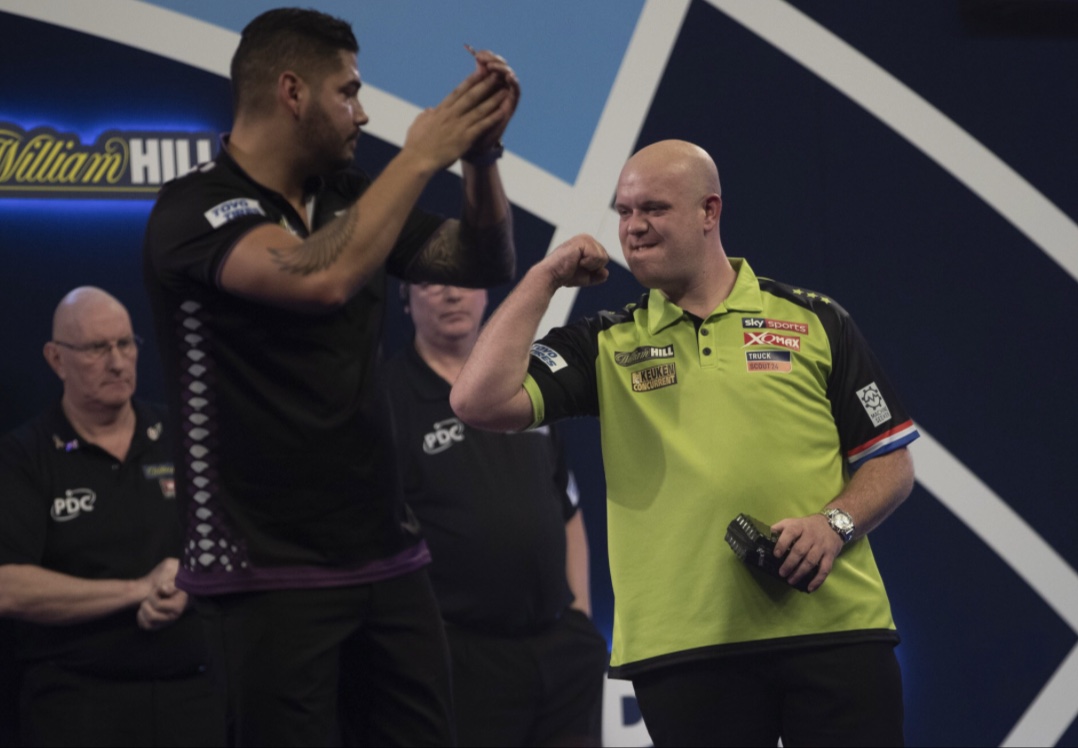 Michael van Gerwen and Kim Huybrechts both survived scares as Luke Humphries breezed through on the opening night of the William Hill World Darts Championship at Alexandra Palace in London.

Van Gerwen, who lifted the Sid Waddell Trophy last year defeating Michael Smith in the final, overcame Jelle Klaasen in a grudge match between a pair who visibly despise each other.

Klaasen capitalised on an extremely poor start from the world number one, as he clinched the first set with a 116 checkout, with van Gerwen averaging below the 90 mark.

‘Mighty Mike’ somewhat clicked into gear in the wake of surprisingly falling behind, pinning a blistering 170 outshot to level up proceedings at one-a-piece in sets.

After leading and losing in the second set, Klaasen found himself behind for the first time as van Gerwen nailed a demoralising 130 checkout, before pinning a 13-dart leg to move 2-1 in front.

Despite once again playing far from his exceptional best, the reigning world champion was comfortable in winning set four and dumping Klaasen out of the tournament.

Van Gerwen will now take on either Ricky Evans or the winner of Mark McGeeney and Matt Campbell – who contest in the first round on Saturday afternoon.

Klaasen himself had already come through a first round encounter with Kevin Burness in order to face his archenemy.

In a similar style to the Dutchman, Burness led in sets but failed to get over the finishing line, with Klaasen reeling off three straight sets and averaging 96 to come through in the tournament opener.

‘The African Warrior’ was handed an inspirational message from a group a darters back home in South Africa prior to taking to the stage, and he brought that inspiration into the first set, pinning an 82 clutch shot to move 1-0 adrift.

Humphries found a number of last dart in hand finishes, including 112 and 160 outshots, to taste a winning start on the stage that saw him unearthed as a World Championship quarter-finalist 12 months ago.

‘Cool Hand Luke’, who dethroned Rob Cross as world champion last time around, will face Jermaine Wattimena in the second round on Saturday, with a potential fourth round rematch with Cross up for grabs.

Nentjes struggled to get sets over the line in the early stages, with Huybrechts snatching the opener from the clutches of the 21-year-old who led 2-0 in set one.

However, the young Dutchman eventually developed some composure, pinning tops to get his first World Championship set on the board, after having already found a sublime 111 checkout in the set.

Nentjes fabricated a minor lead, though, only for Huybrechts to construct a fight back. The Belgian pinned a 164 outshot en route to turning the match on its head and booking his place in the second round.

The 34-year-old will contest a mouth-watering clash with World Matchplay champion Rob Cross on Saturday evening.

A so far tension-riddled World Darts Championship will resume on Saturday afternoon with 65-year-old Paul Lim returning to the Ally Pally stage.