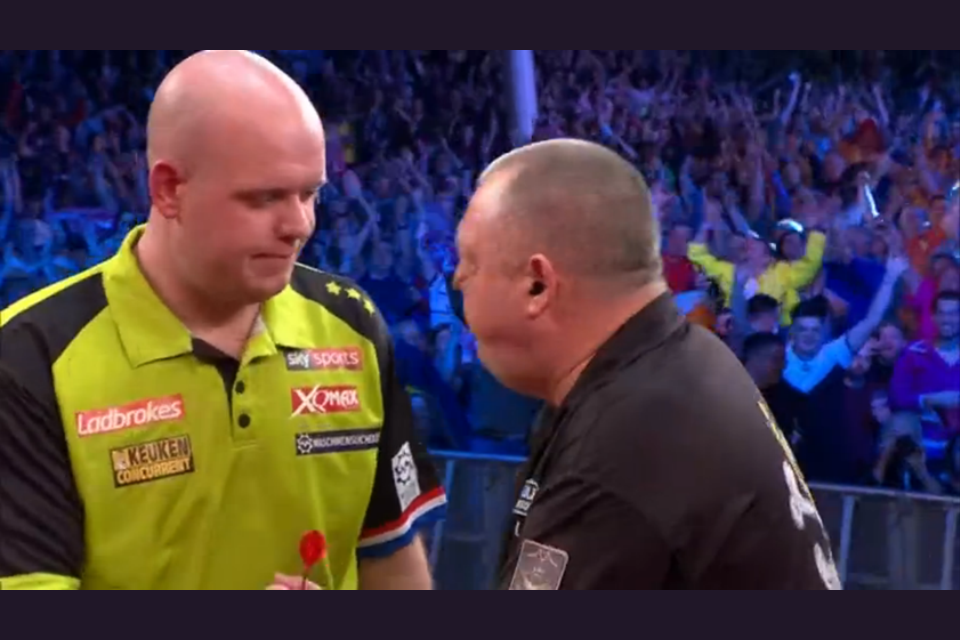 Van Gerwen, Anderson and Wright all crash out on day 1 of UK Open

Michael van Gerwen, Gary Anderson, Peter Wright and Raymond van Barneveld were the biggest names to crash out on Friday of the 2019 UK Open in Minehead. It was a hectic day, spanning almost 12 hours and four rounds, as the field was narrowed down from 159 to 32 players.

Michael van Gerwen’s UK Open campaign was brought to an end in round 4 during the evening session, where an inspired Mervyn King produced some of his best darts to see off the Green Machine. There were ominous signs for King early on, as van Gerwen checked out 170 in the opening leg, but Mervyn fought back to lead 3-2 at the first interval. The world number 18 reeled off four straight legs to go within three legs of the match at the final break, firing in a superb 125 checkout en route. The Dutch man narrowed the gap to 7-5, but King checked out a majestic 141 to lead 9-5 much to the delight of the Minehead crowd. Mighty Mike prolonged the match with an excellent 108 finish in the next leg, but King was not to be denied, hitting double 6 for a famous victory. It is the second year in a row that van Gerwen has fallen at the first hurdle, after he lost to Jeffrey de Zwaan at the same stage in a very quiet Butlins 12 months ago. Things don’t get much easier for Mervyn, who plays Rob Cross in the Last 32, ‘Voltage’ having got the better of Darren Webster 10-4.

Gary Anderson was also defeated on the opening night, as Steve Beaton rolled back the years to produce a performance that was too much for the returning Scot. Anderson’s back wasn’t giving him much trouble early on, as he fired in an 11 darter in the opening leg of the match. However, Beaton fought back to lead 3-2 at the break. Anderson won the next mini session to level the game at 5 a piece and set up an intriguing end to the match. The Bronzed Adonis checked out a terrific 130 finish for a crucial break of throw, and he never looked back, finishing 100 on double 20 to claim an excellent win for the 1995 World Champion, 10-8 over Gary Anderson.

The tie of the night looked set to be between Peter Wright and Mensur Suljovic, as the famous open draw threw up a superb early encounter. The first nine legs had five breaks of throw with Mensur edging the match 5-4. With Wright sitting on 18 to level it up, the Austrian fired in a terrific 170 checkout to gain a crucial advantage which he would never relinquish. In sharp contrast to the opening 10 legs there was not one break of throw in the final session, as Mensur threw very well when he started the leg to close out a 10-8 victory. The tie of the round did not disappoint, with Wright averaging 106 and coming out the wrong side of an excellent match.

Raymond van Barneveld’s final UK Open also came to an early end, as he was defeated by an inspired Simon Stevenson 10-7 on Stage 2. Barney made a mini comeback from 8-3 down, but there was no stopping ‘The Mirror Man,’ who booked his spot in the Last 32. Gerwyn Price continued his back to back Players Championship winning form, defeating Joe Cullen 10-6 with an excellent display. The highlight was a 156 checkout, which brought him to within one leg of the match, which he eventually closed out with ease.

There will be no Riley’s qualifiers progressing through to the Last 32, after Scott Taylor missed match darts to dump out Mickey Mansell in a tight tussle in the multi board room. Mansell came from 8-5 down to come through a gruelling contest and set up a clash with Steve Lennon, who saw off Stephen Bunting 10-6. With all the big names falling, James Wade is many people’s favourite to win the tournament, and his excellent 10-1 demolition of James Wilson will give him and his supporters confidence he can go very far in this tournament. Jamie Lewis pulled off a spectacular win over his namesake Adrian, coming back from 4-0 down to level the match at 9 all, where he took out an incredible 161 to send another big name in Jackpot packing.

Only two players made it all the way from round 1 through to the Last 32 tomorrow, those being the Latvian star Madars Razma and former BDO world semi finalist Jamie Hughes. Hughes saw off Callan Rydz, Diogo Portela and Devon Petersen before defeating Ian White in a terrific Round 4 match, averaging 103 in beating the Diamond 10-5. Razma got the better of Dennis Nilsson, Mark McGeeney, George Killington and Jelle Klaasen to book his well-earned spot in the Last 32.

The open draw threw up a few more gems for the Last 32 on Saturday afternoon, with Hughes taking on Gerwyn Price, Michael Smith facing Daryl Gurney and Mervyn King against Rob Cross arguably the picks of the ties. Bookmakers are struggling to pick a favourite with the field blown so wide open, but names such as Cross, Smith, Price, Suljovic, Wade, Gurney and Chisnall are all heavily fancied to be still around come Sunday evening.

Luke Humphries: ‘I’ve got to work on my floor form because I want more nights like this’

Robb and Littleboy win Events 5 and 6 in Queensland