HomeBlogVan Gerwen Back On Song With Back To Back WSOD Titles 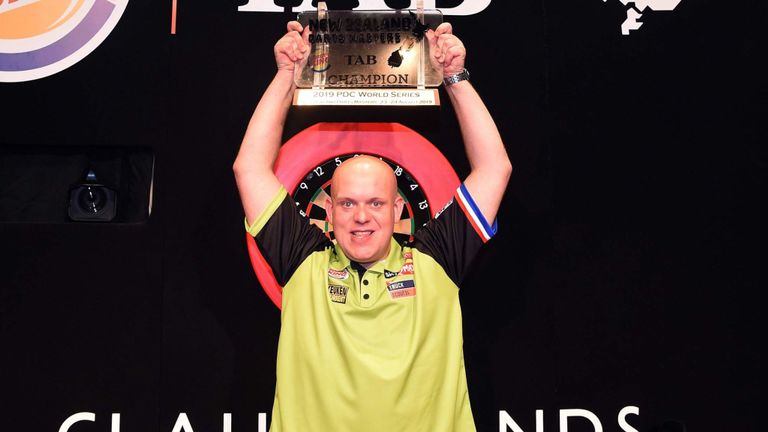 Michael Van Gerwen bulldozed his way to yet another winners’ cheque with an 8-1 demolition of Countryman and friend, Raymond van Barneveld to win the New Zealand Darts Masters at the Claudelands Arena in Hamilton.

The Dutchman is certainly back in the groove after a barren couple of months, and will be a renewed threat for the big tournaments to come at the back end of 2019.

It could have been so very different for the Green Machine though in his very first match, as Kyle Anderson had four match darts to dump Van Gerwen out in a deciding leg, before MVG prevailed 6-5.

From there on, there was no looking back, as Van Gerwen dispatched Gary Anderson 8-5 in a high quality quarter final, before hammering Rob Cross 8-3 in the last four to set up a final meeting with his compatriot van Barneveld.

van Barneveld had enjoyed an impressive run to the final, edging out Cody Harris 6-5 in the last 16, before resiliently taking care of Daryl Gurney 8-6 with a 60% double success  to reach the semi finals, where he overcame James Wade, 8-5, with his accuracy on the doubles again proving crucial.

Unfortunately the soon to be retired five times World Champion was no match for Van Gerwen in the final, with his doubling deserting him at the worst possible time, missing three darts at doubles to fall 2-0 behind. A 100 checkout doubled the lead to 4-0, and RVB finally got off the mark on double 10 to stop the rot at 5-1. The task was too great though for Barney, as van Gerwen clinched the next three legs without reply to secure back to back World Series of Darts events.

In contrast to the other events on the World Series calendar, shocks were few and far between in New Zealand, with only Ben Robb causing an upset with a 6-4 triumph against Simon Whitlock in round one. Rob Cross would send Robb packing in the last eight with an emphatic 8-3 win.

This closed out the World Series tour, with only the finals to come in Amsterdam in November.