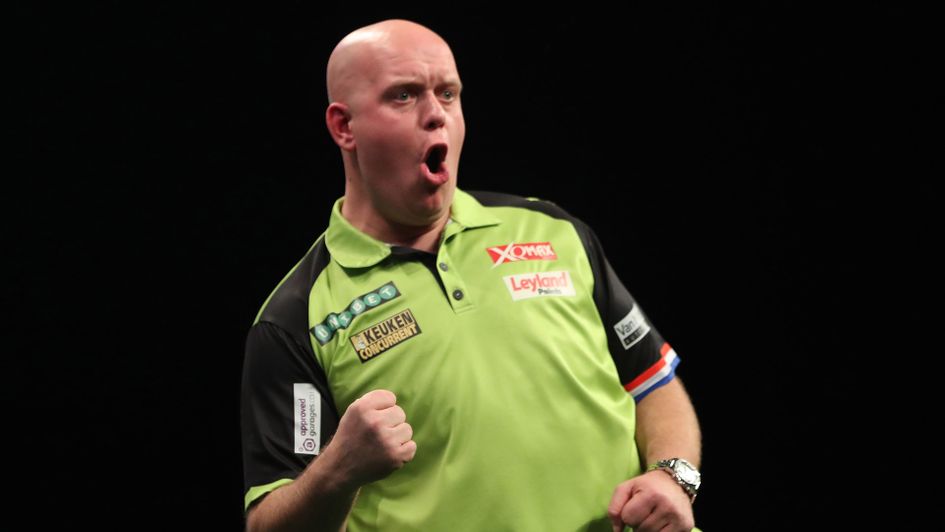 The German Darts Open delivered once more as Michael van Gerwen got revenge for his two previous defeats to Ian White in Saarbrücken and followed up three consecutive last-leg decider wins with an 8-3 win over ‘Diamond’ in the final.

Previously at the Saarlandhalle, Peter Wright and Max Hopp had picked up dramatic wins, with 2019 going some way to rival those two: all four quarter-finals going to a deciding leg and the semi-finals going 7-6 and 7-5. However, it’s now three European Tour wins out of four this year for Van Gerwen and an incredible 31 overall.

Sunday’s final day of action was always going to be spectacular with just four unseeded players left in the field, and all of them having excellent pedigree. UK Open champion Nathan Aspinall, five-time World Champion Raymond van Barneveld, two-time Lakeside semi-finalist and on-fire Jamie Hughes, and world number 19 John Henderson were amazingly the outsiders on an impossible-to-predict finals day.

The feast of tungsten got underway with a rematch of Jamie Hughes and Gerwyn Price’s stunning match at the UK Open, and it wasn’t quite as spectacular as that, but ‘The Iceman’ was still relatively impressive with a high finish of 128, pouncing on 19 missed darts from ‘Yozza’ and running out a 6-2 winner. Hughes’ best Euro Tour run came to an end at the last 16, but we will see more of him very soon in Graz and Sindelfingen.

Two players with more illustrious European Tour careers went head-to-head next, Rob Cross seeing off Joe Cullen in typical ‘Voltage’ style of late with an average just over 100, sealing his quarter-final berth 6-3. Adrian Lewis has been unlucky on stage recently, but it turned for him on Sunday as an average of just 85 was enough to ease past John Henderson, who couldn’t produce the darts which saw him see off Stephen Bunting and Max Hopp to reach the third round.

‘Jackpot’ would play fellow Stoke thrower Ian White in the last eight after ‘Diamond’ was also nowhere near his best but still moved through courtesy of a 6-2 success over Darren Webster, who seems to consistently win his first game on the continent and struggle from there on in. The slightly disappointing quality then took a turn for the better as Dave Chisnall took to the stage, winning the first two legs in 23 darts and not slowing down.

‘Chizzy’ was averaging a simply sensational 149 for his first nine after the first four legs, with his opponent Peter Wright averaging over 100 and unable to do anything. The standard slipped slightly in the last few legs, but the former Lakeside finalist’s average ended at 106.13, which was enough for a 6-1 win over ‘Snakebite’ and a meeting with Mensur Suljović in the evening session. ‘The Gentle’ averaged a smidgen below 100 and piled in six 180s in a 6-3 win over German Darts Champion Daryl Gurney.

Arguably the two highlights of the last 16 were left until last, Nathan Aspinall showing why he won the UK Open and made the semi-finals at Ally Pally with a sensational display against another in form player, James Wade. ‘The Asp’ stormed into a 3-0 lead and hardly gave Wade a sniff from there despite a very decent performance from ‘The Machine’. A 107.92 became Aspinall’s new best stage average and secured him a first Euro Tour quarter-final against a great Dutchman.

The resurgent Raymond van Barneveld took Michael van Gerwen all the way, but MVG extended his phenomenal record in deciding legs on the European Tour to 20 in a row. A 114 checkout with RVB sat on 104 meant he progressed at Barney’s expense. The quarter-finals kicked-off with a match-up between two of the best players in the world, Rob Cross and Gerwyn Price. The 2018 World Champion came out on top in a match that was close all the way, finishing with an average of 99.6 to Price’s 100.14.

‘Voltage’ would play Ian White in the last four, who found a 121 checkout in a stunning deciding leg against Adrian Lewis to reach the semi-finals in Saarbrücken for the third consecutive year. The other half of the draw saw Dave Chisnall reverse his fortunes from the German Darts Grand Prix against Mensur Suljović: the amiable Austrian squandering three match darts and allowing ‘Chizzy’ to win the third deciding leg of the evening and reach his first European Tour semi-final since May 2017.

Nathan Aspinall looked like throwing the tournament wide open in the next game, leading Michael van Gerwen 4-3 and 5-4, but the three-time World Champion had other ideas, taking out an incredible 135 with the Stockport man sat on a two-dart checkout to win and proceeding to win another final leg, surviving a solitary match dart and wrapping it up in 14 darts to get revenge for Aspinall’s 6-1 win in Players Championship 4 earlier this year.

Ian White was determined to end his semi-final curse at the Saarlandhalle, and was involved in a high-quality start to his game with Rob Cross: the pair exchanging 11-darters for three legs in a row before the Dutch Darts Champion grabbed the upper-hand when it settled down. Leading 5-3, he managed to break Cross’ throw to win 7-5 with a doubles percentage of over 50 and seal a third Euro Tour final appearance, a second in just over six months.

Dave Chisnall hadn’t beat Michael van Gerwen in 23 attempts going into their semi-final clash, but he managed to stay with MVG for the majority of the contest and produced a fantastic 126 checkout to take the lead at 4-3. However, MVG rallied to lead 5-4 only for ‘Chizzy’ to find a 12-darter to go within one, only to miss four match darts and let Van Gerwen back in to send it all the way once again.

We all know what happens with MVG and deciders on the European Tour, and it happened again as he made it 22 in a row with a brilliant 12-darter to reach his 36th European Tour final. In that final, he and Ian White shared the first two legs before the Dutchman hared off into the distance, winning six straight legs including two 12-darters and two 13-darters, one of them won with a 130 checkout.

White managed to deny Van Gerwen in the next couple of legs, but it was only prolonging the inevitable as ‘Mighty Mike’ sealed an 8-3 success with an average of 100.22 to seal his 31st European Tour title and a third of 2019. He will be hoping to make it four in Graz next weekend, where Jonny Clayton will defend his Austrian Darts Open title, but before then there are midweek ProTours in Barnsley with several top players missing as they are focused on the Premier League in Manchester on Thursday. If any of those events have half the drama we saw in Saarbrücken on Sunday, we’re in for a treat.

Bennett and Care were victorious in Chorlton