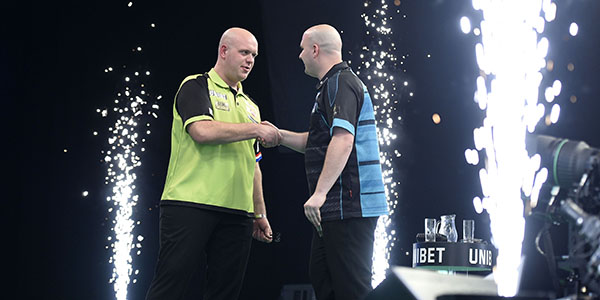 Michael Van Gerwen continued his unbeaten start to the 2019 Unibet Premier League on Thursday night as he defeated former world champion Rob Cross 7-2 in a night which saw 4 out of the 5 matches go the distance.

World Champion Van Gerwen, who had already recorded wins over Michael Smith and Mensur Suljovic, got off to a flying start winning the opening 6 legs which included a hat-trick of 14 darters along with an 11 darter. Before Cross won back to back legs to make it 6-2 before missing a dart for 6-3 where then Van Gerwen came in and finally secured the win with a 16 darter to maintain his winning run so far.

World Number Three Peter Wright also maintained his unbeaten start, picking up his first win of the campaign against Irish man Steve Lennon playing in front of a home crowd and certainly showed his potential, narrowly losing in a last leg decider 7-5.

Five-time World Champ Raymond Van Barneveld, who is competing in his final Premier League campaign, received an enormous reception as he took on Mensur Suljovic in the final match of the night. The Austrian ace stormed into a 5-1 lead before the Dutchman got it back to 5 a piece which included back to back 14 dart legs along with a 13 darter. A mixed reception as Suljovic as he stepped up for 6-5 hitting 48 in 2 darts before in the deciding leg, missing double 19 for a 7-5 win and Barney stepped up on 92 and took it out of double 8 with his last dart to secure back to back draws after being behind in both.

A high-quality match started off the night as Grand Slam champion Gerwyn Price took on European champion James Wade with both players receiving mixed receptions as they made their way to the stage from the walk on. Wade took control of the match, storming into a 5-2 lead before Price won 4 legs on the spin which was won in 14,13,12 and 17 darts to maintain his unbeaten start. A sloppy deciding leg for Price while Wade won it with a 12-dart leg to secure a point in Dublin.

Daryl Gurney made it back to back wins as he took on 2018 finalist Michael Smith. Smith took a 2-0 lead before Gurney stormed his way ahead winning 4 consecutive legs including 140 finish to make it 4-2. Smith then moved back ahead winning 3 straight legs to make it 5-4. But Gurney won the final 3 legs of the match without allowing Smith a dart at double as he prevailed 7-5.

Darts’ widest-reaching tournament continues with Night 4 in Exeter on Thursday 28th February live on Sky Sports, worldwide through the PDC’s broadcast partners and through PDCTV-HD for Rest of the World subscribers.