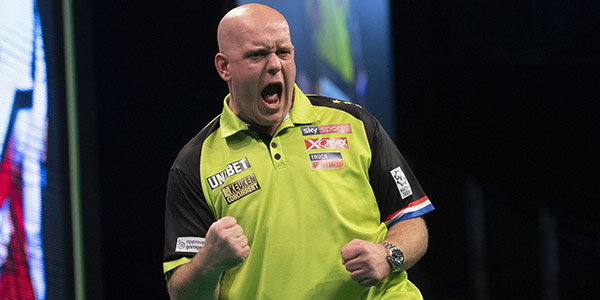 Michael van Gerwen beat Rob Cross 11-5 in the final of the 2019 Premier League Darts to become champion of the prestigious event for a fifth time, only one behind Phil Taylor.

After a gruelling, fifteen-week league phase, Van Gerwen, Cross, James Wade and Daryl Gurney were rewarded for top-four finishes with a trip to the huge O2 Arena in London. MVG carried on where he left off at the venue by seeing off a challenge from Daryl Gurney in the opening semi-final, winning 10-7 before capping off a seventh consecutive Premier League final with a fourth consecutive title.

2018 World Champion reached his fourth major final after beating James Wade 10-5 in the second semi-final, but missed three crucial darts to continue a fight-back in the final and level at 5-5, a moment which proved crucial in the final outcome as Van Gerwen reigned supreme once more. After disappointment in Barnsley at the weekend followed a pleasing night in Leeds for the world number one, he would’ve been keen to get off to a flying start against Daryl Gurney, who’d seen off ‘Mighty Mike’ in their last three televised meetings.

The early stages of the semi-final had a similar feeling to the Northern Irishman’s victory in the Players Championship Finals last November as Gurney found double 16 consistently on his throw to finish solid legs and stay with Van Gerwen at 4-4. He then had a great chance to break the throw but squandered three darts to lead for the first time. However, ‘Superchin’ managed to regain his composure before the first break as he took a scrappier 18-darter to go in level.

Gurney came out firing once the players came back onto the stage, breaking in the first leg, but immediately allowed MVG to break back relatively comfortably courtesy of a clinical 89 finish, before the former World Grand Prix champion failed to checkout in three visits from 107 edged Van Gerwen closer to victory at 8-6. The World Champion eased to victory from there, double 16 sealing a 15-darter to win 10-7 and book his spot in the final against either Rob Cross or James Wade.

‘Voltage’ was pipped to the post as far as becoming only the third person to top the league phase was concerned, but he put that to the back out his mind against the same opponent that stopped him from achieving that feat, ‘The Machine’ looking to reach his first Premier League final since 2010. Wade soon burst into life, a 12-darter consolidating an earlier break and handing him a 3-1 advantage.

However, that was really as good as it got for the Aldershot man throughout the match, Cross finding form and winning the next four legs, two in 13 darts and two in 15. The pair shared the next two to head back-stage at 6-4 to the 2018 World Champion. Wade was struggling to get going and ‘Voltage’ took full advantage surging 9-4 ahead before missing the big number twice on 39 and allowing the nine-time major champion to get one back with a stylish double-double checkout.

The comeback was short-lived, though, as Cross produced a sublime 12-darter finished with a 128 checkout to seal his place in the final and set up a meeting between the last two World Champions and the top two in both the Order of Merit and the Premier League round robin. A fitting finale for one of the greatest Premier Leagues ever. 7-2 and 8-2 wins for Van Gerwen in the league phase meant he had the psychological advantage going into this one, and it showed early on as he eased to a 2-0 lead.

The Hastings man managed a get a foothold with a 13-darter, but MVG then turned on the style to go 5-1 up. It was at this point that we started to see the same Rob Cross that beat ‘Mighty Mike’ on his way to winning the world title eighteen months ago, real passion and determination paving the way for three consecutive legs won in just 39 darts. However, ‘Voltage’ failed to finish off the first session in that fashion, squandering three darts and allowing the Dutchman to lead 6-4.

Van Gerwen took the first two legs after the break, and broke Cross’ throw in the fifteenth leg to go one away from a fifth Premier League title, which he duly sealed in no time at all, a 130 checkout, the highest finish of the night in the final and most significant leg of the night meaning that Michael van Gerwen was crowned the Premier player on planet darts once again.

It’s the 30-year old’s 32nd major title and his eighth already in the 2019 season, setting him up nicely for this weekend’s Dutch Darts Masters in Zwolle as he looks to please the home fans for a sixth year running and the next televised tournament, the World Cup of Darts in Hamburg. A new partner in Jermaine Wattimena means that it’s a slightly different challenge for the Premier League champion, but one that he will relish as he looks to take home that particular trophy for the third consecutive year.