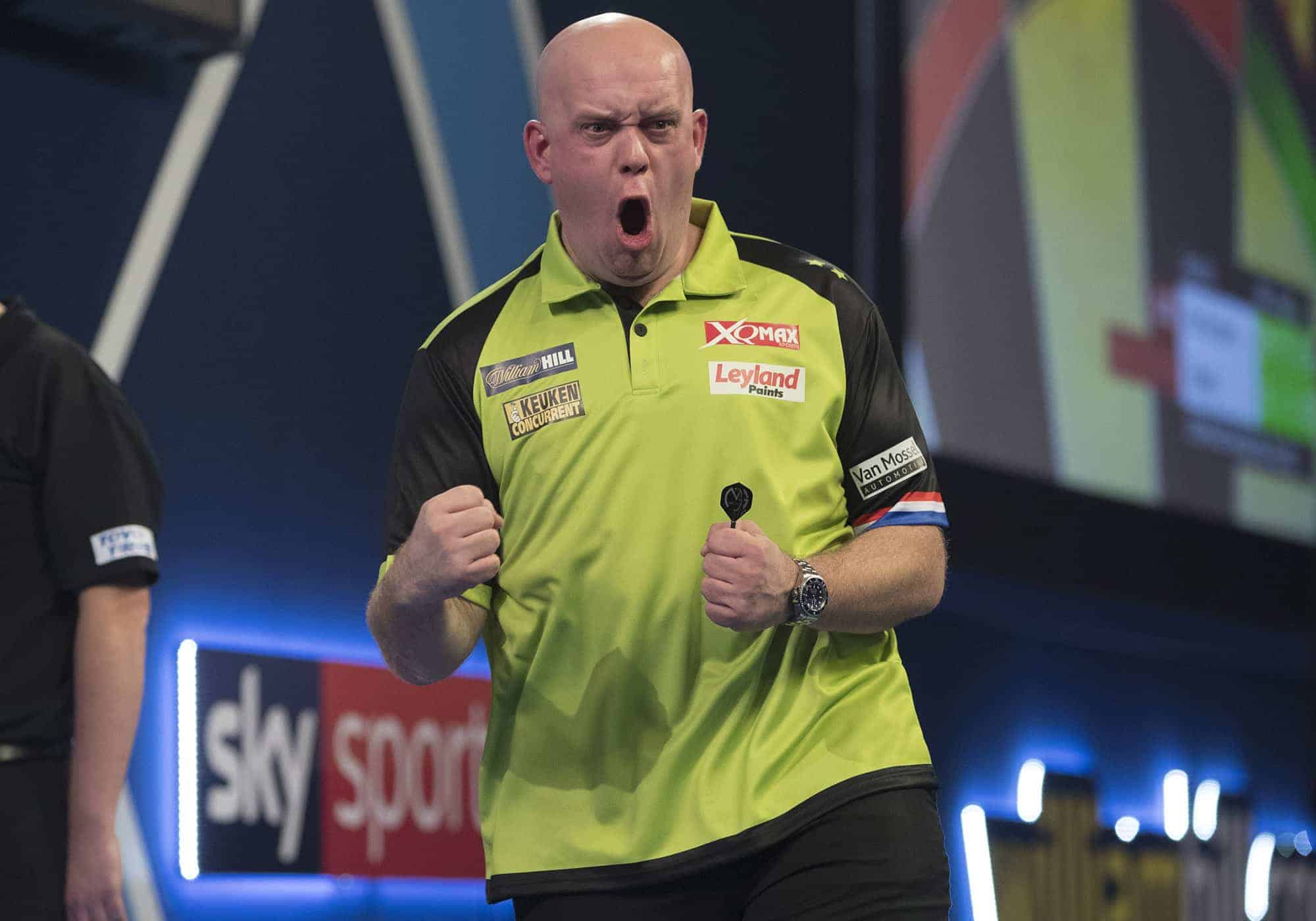 Michael van Gerwen survived a huge scare from Mervyn King to advance to the semi-finals of the World Grand Prix after beating the former World Master 3-1.

In a repeat of the 2012 final, the World number one had to survive set darts by his opponent in three of the four sets played to book a date with Chris Dobey in the final four after he beat Ian White 3-2.

Victory against The King for the four time Grand Prix champion keeps his search for a fifth title on the emerald isle well and truly alive heading into the weekend.

King missed three darts to win the opening set after hitting a 10 darter to break the van Gerwen throw. But in the final leg of the set he missed three darts, one at tops and two at double 10 to take the lead before MVG hit double 9 to steal the opener.

The Norfolk thrower would level the game in a second set which saw two 170 outshots. The first came from van Gerwen in leg two to level before King won the set with the big fish outshot as the 2012 finalist continued to answer the questions MVG asked him.

The World number one would regain his advantage in set three, despite missing a 155 checkout on double 19, he came back first dart at the same target to get his nose back in front.

But King would not be shrugged off hitting a 132 checkout at the start of the fourth set. However, two missed darts at double 16 opened the door to MVG who hit double 1 last dart in hand. The World number 21 won the third leg of the set which saw both players miss clumps of darts at doubles.

Van Gerwen won the last two legs of the match to seal his place in the semi-finals after King missed a dart at double 18 to win the set in leg 4, the three time World champion won that leg and then finished with a 60 outshot to win an epic encounter.

Elsewhere, Glen Durrant won a final set thriller against Jermaine Wattimena to progress to the semi-finals on debut.

Wattimena came out the traps flying with a 154 checkout in the opening leg before sealing the first set in double quick time.

Durrant decided to stay on stage during the break in between sets and responded superbly. After his opponent missed double 10 to level the set there was no stopping the three time BDO World Champion as he got a set whitewash of his open to level the game at 1-1.

The third set was much tighter than the previous two heading to a deciding set where both players had chances to edge to within a set of the match. But it was Durrant at the fifth time of asking who got his nose in front for the first time after nailing double 16.

The three time Lakeside champion missed the bull for a 122 finish before the Dutchman hit double 10 to break in the first leg of the fourth set. Duzza broke back before missing three darts to then go infront. That present Wattimena a chance on tops to break back which he took before hitting a 110 outshot to send the game into a final set.

Despite missing darts at double, the Machine Gun won the opening leg of the decider before Durrant responded with a 116 out so reminiscent of the bottle which saw him become the BDO’s dominant force. The following leg saw the Middlesborough man hit a 180 and 137 before hitting double 16 to go 2-1 up and throw for the match. And it was that same double which became his friend against as he booked his place in a second PDC televised semi-final of 2019.

Chris Dobey hit five ton plus checkouts to come back from 2-1 down to beat Ian White 3-2, inflicting Diamond to his eighth major TV quarter-final defeat.

Dobey came out the blocks flying winning the opening set in straight legs thanks courtesy of a 132 checkout on the bull to give the Newcastle thrower a 1-0 lead.

White levelled the game with his fifth set dart in leg four as Hollywood’s average from the first set fell significantly.

Diamond roughened his points up before the start of set three and it seemed to work a jem going 2-0 quickly after Dobey missed three darts at double to hold in leg 2 before breaking on Double 2. White completed the whitewash in the set a leg later hitting double 8.

Hollywood played dream darts from the brink of defeat with a succession of ton plus finishes forcing a decider. Dobey went 2-1 up in set four with a 120 outshot before hitting treble 16, double 16 to finish off a 100 combination.

The former Grand Slam quarter finalist broke in leg one of the final set hitting double 16 before a mammoth 156 checkout doubling that advantage. Then a second 100 checkout to seal a set saw him win the match with a 104 final set average.

Chisnall raced into a 2-0 lead in the opening set before the Asp raced back to force a decider where both players missed darts to win the set before Chizzy nicked it at the sixth attempt.

The St.Helens thrower doubled his advantage with a double 18 giving him a 2-0 set lead after hitting a 61 on tops to break.

Chisnall missed two match darts in the final leg of the third set missing one at tops and double 10 before the Asp penned double 10 to half the deficit in sets.

But, the 2013 finalist broke with a finish of 45 and doubled the advantage in the fourth set when Aspinall missed three darts at double 16 before sealing the game on the same double, progressing into the semi-finals of the tournament for the third time in his career.