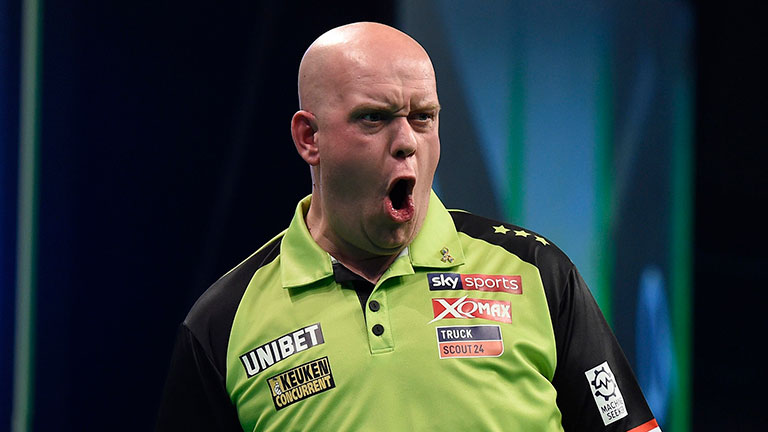 Michael van Gerwen will meet Peter Wright in the final of the Paddy Power Champions League after the two came through their semi finals.

van Gerwen was forced to go all the way in a classic with Gerwyn Price, eventually coming through 11-10.

van Gerwen broke immediately, and built a 3-1 lead before the pair traded 180’s in leg five with Price nailing a 76 finish to narrow the gap. The Welshman did well to stay on van Gerwen’s coat tails to trail 4-3 at the break. A 120 checkout on the resumption for MVG kept his two leg cushion. A 65 finish broke the Dutchman though as Price found parity at 5-5, and a thirteen darter saw “The Iceman” hit the front for the first time. A 106 checkout restored order, and a 72 regained van Gerwen’s lead. The two traded breaks after the second break, but couldn’t be separated as the match went all the way to a deciding leg.

Price’s scoring deserted him at the vital time, and van Gerwen took out 46 to break, take the match, and take his place in a second Champions League final.

There, he will meet Peter Wright after he comfortably accounted for Michael Smith by an 11-5 scoreline.

Wright began with intent, with a 128 finish on double ten setting his stall out in the opening leg. He then doubled his lead with a break of throw after missed doubles by both. A 72 checkout moved Wright into a 4-0 lead, and he made it a treble break with a 58 checkout for a 6-0 lead. A 180 followed by a majestic 161 checkout took Wright to the break at 7-0.

Smith finally got off the mark after the interval. A 92 checkout restored order for Wright, and a 76 finish made it 9-1 for the World Cup winner. Smith did make a fist of things though, a 76 checkout of his own clinched back to back legs to trail 9-3. Smith made it three legs on the spin after three failed attempts at a double by Wright, and a 121 finish on double 14 took Smith to the break trailing 9-5.

The break came at the perfect time for Wright, as he crashed in a 116 finish, followed by a 25 finish to get over the line and secure a place in the final. A 103.52 average and 11 out of 20 on the doubles were more than enough for Wright.