HomeBlogVan Gerwen gets the price right with fifth Players title 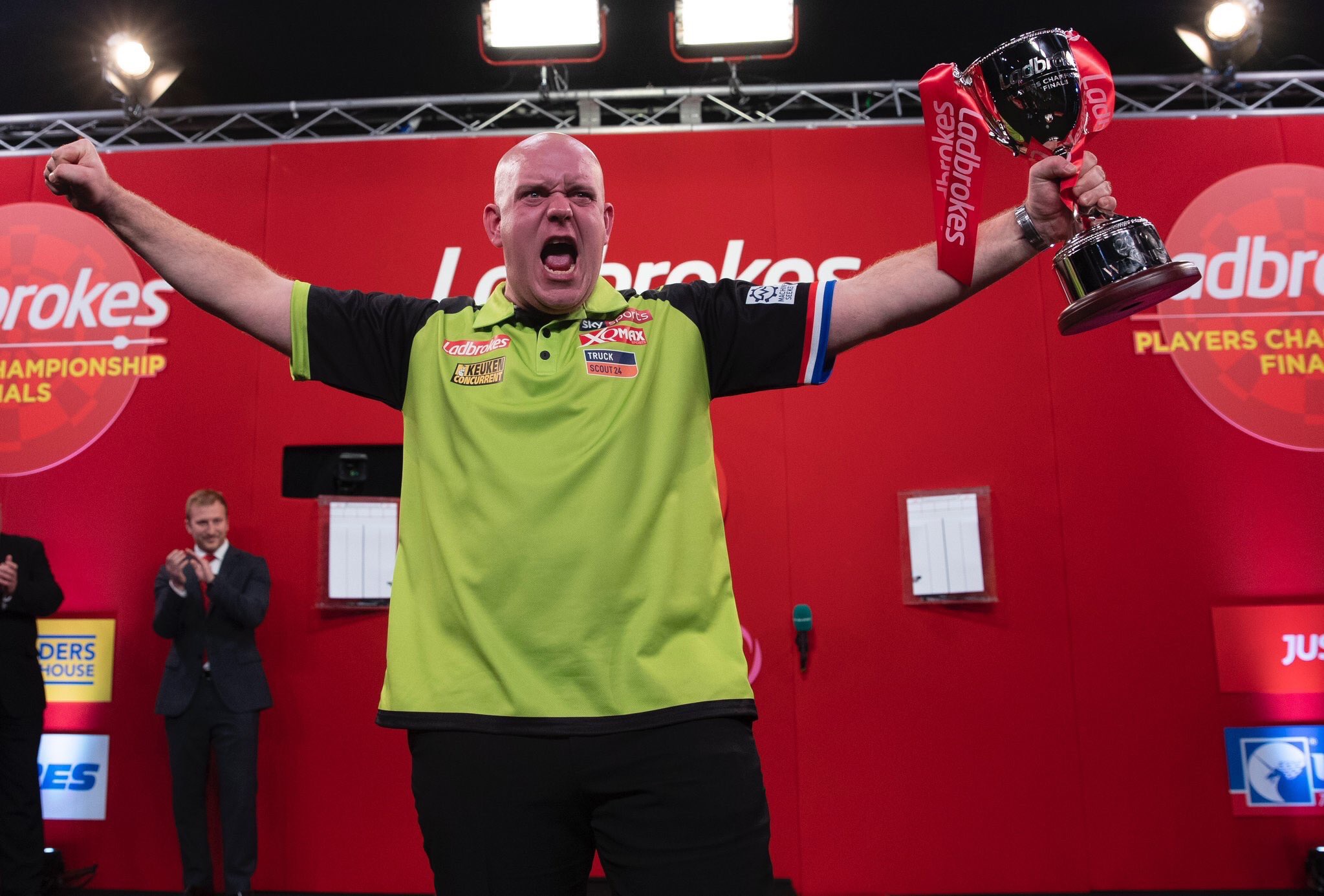 Price missed four darts to send the game into a deciding leg before the World number 1 nailed double 5 to win back the title he lost to Daryl Gurney 12 months ago.

The pair took 17 darts between them in the first leg to hit the first double which Van Gerwen hit to brake throw.

A slow start from the recent Grand Slam champion saw him trail 3-2 at the first break.

The Dutchman won the first leg after the interval to extend the lead to two before  a share of the next four saw Van Gerwen take a 6-4 lead at the halfway mark.

Missed doubles after that break would rue MVG as Price came back to lead the game for the first time at 7-6.

Van Gerwen would draw back level again in leg 16 thanks to a 72 checkout.

The three time World Champion went on to win the next two legs to make it 10-8 and to go within one leg of the title.

But Price wouldn’t give up on a chance to win his third major title without a fight and hits tops to reduce the deficit to 10-9.

However, Price missed four darts to force a decider which MVG punished to lift the Players Championship for the fifth time in Minehead.

In the evening’s semi-finals, Price was the first to book his place in the final after a 11-8 win over Chris Dobey.

Dobey raced into a 4-1 lead before Price pulled off a succession of 11 darters to level it at 4-4.

Hollywood kept edging his nose in front in a back and forth contest before missing four darts at double to make it 9-8, a mistake which saw Price fully exploit.

From that point onwards the Iceman was faultless, seeing out the game by 11 legs to 8.

Van Gerwen was made to work as hard to make the final after beating Ian White by the same scoreline to make his fifth consecutive finale at the pre Christmas event.

The World number 1 raced into a 4-1 lead early on who then kept that buffer throughout the match.

White kept it within two legs before MVG restored his three leg advantage to make it 8-5 before a 112 checkout made it 9-6 to the three times World Champion.

And Van Gerwen stayed on course for his fifth title in Minehead by beating Diamond 11-8 with a 102 average.

In the afternoon’s quarter finals, Ian White broke his quarter final duck at the tenth attempt in a PDC Major televised event after beating William O’Connor 10-9. Diamond hit an 11 darter in the deciding leg to make it into his first televised semi-final of any description since the 1997 News of the World Championships.

Michael Van Gerwen branded Mervyn King “bad for darts” after he beating the former World Masters champion 10-6. King had been suffering with sciatica in his back and was visibly seen playing through the pain barrier.

Gerwyn Price hit a 108 average in beating Stephen Bunting 10-3. Despite averaging 100 throughout the match, the Bullet had no reply for the Iceman’s surge towards the semi-finals.

Chris Dobey saw off Raymond van Barneveld 10-2 in a scrappy last eight tie. The highlight for the tyneside thrower was a 167 checkout to knockout the five time World Champion.