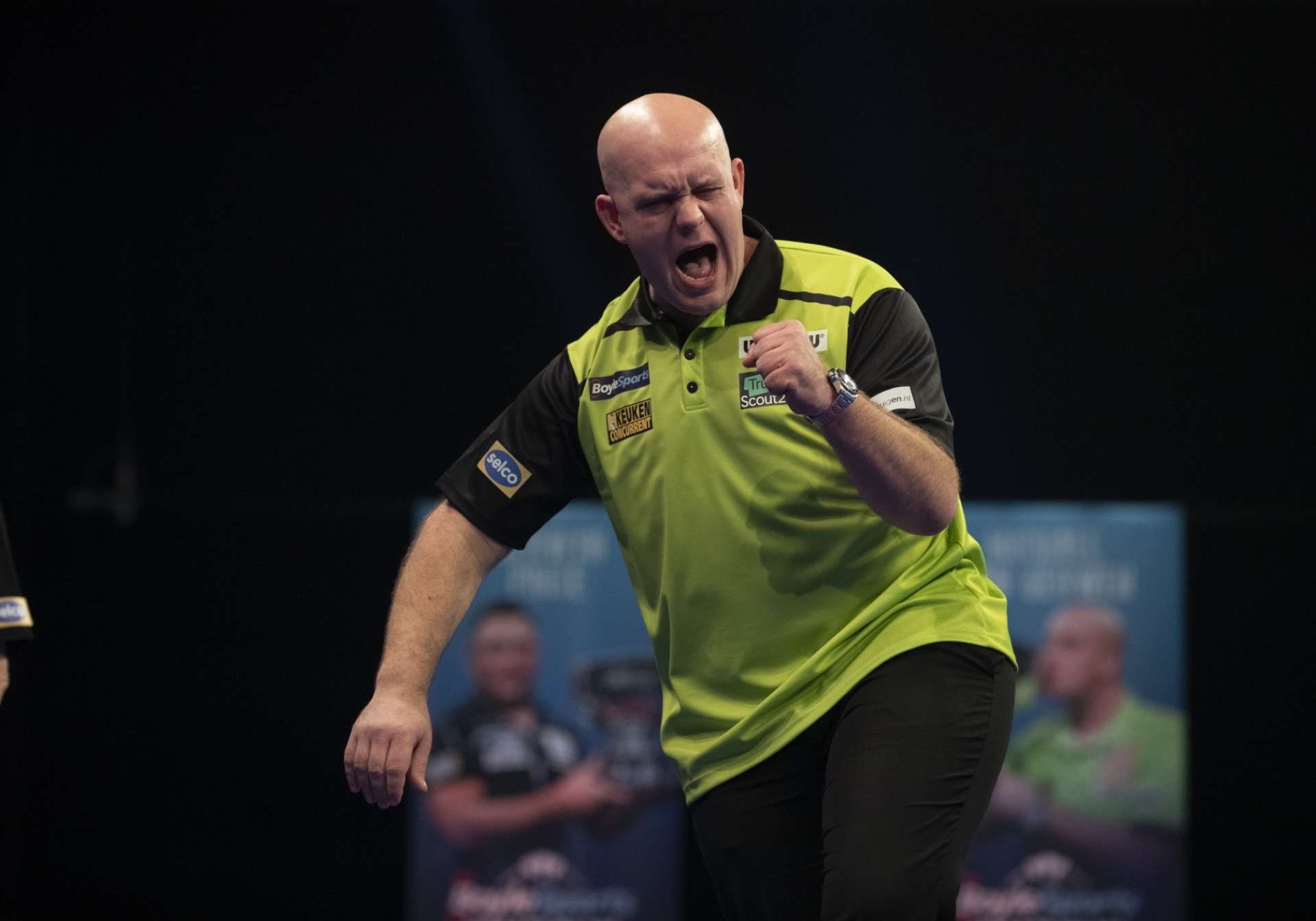 Simon Whitlock and Dimitri Van den Bergh also booked their spots in the last 16 on another bumper day of action at the Ricoh Arena.

Van Gerwen put in another impressive display, seeing off Gabriel Clemens 5-1 with a 103.5 average and two 180s.

That puts him through to round two, but the other place is open to three players after Joe Cullen beat Adam Hunt 5-4 in a thrilling game.

Wade has been one of the best performers of the Grand Slam thus far, and hit 50% of his doubles in a routine 5-3 win over Jermaine Wattimena to seal qualification.

Group D’s other match saw Glen Durrant fall to a second consecutive 5-1 defeat, meaning he is out, with Wattimena and Damon Heta facing off in a straight shootout on Wednesday.

World Matchplay champion Van den Bergh stole the headlines on day one after breaking the tournament’s record average, and he was in three figures once more against Nathan Aspinall.

A 146 checkout was the highlight of the Belgian’s 5-1 win as he moved through to the knockout stage.

Aspinall now faces a winner-takes-all clash with Ricky Evans after ‘Rapid’ beat Wayne Warren 5-3. The BDO World Champion is now out of contention.

The other game in Group B on Tuesday was a thriller as Adam Gawlas game from 3-0 down to Ryan Searle to force a decider, but the Czech youngster missed a match dart and cannot qualify as a result. Searle plays Anderson in a deciding clash on day three.

2014 runner-up Chisnall is the final player through with a game to spare after he beat Rob Cross 5-2. Missed doubles cost ‘Voltage’ and his hopes now hinge on a meeting with Luke Humphries.

‘Cool Hand’ was taken to a ninth leg for the second game running, but came through this one successfully, beating Justin Pipe 5-4.

World and European Champion Peter Wright stepped up his game when he needed to, averaging 107 to beat Ian White 5-3 in a high-quality contest.

‘Snakebite’ will probably still need to beat Devon Petersen in his final group game, however, with ‘The African Warrior’ sitting on top of Group F after a 5-2 win over Dirk van Duijvenbode.

Gerwyn Price, the two-time and defending Grand Slam champion wasn’t at his best once again but managed to beat his World Cup team-mate Jonny Clayton to go to the brink of the last 16.

Arguably the best game of day two was the first contest of the evening session. Lisa Ashton led Krzysztof Ratajski 4-1 after ‘The Polish Eagle’ squandered several excellent opportunities, but the world number 14 came back in style.

He won the last three legs in 37 darts to claim a 5-4 victory, averaging 104. Michael Smith is at the summit of the group after another stylish win.

‘Bullyboy’ hit five 180s and only missed three darts at doubles in his 5-2 win over José de Sousa.

The Grand Slam of Darts continues on Wednesday with Groups B, D, F and H playing to a conclusion.