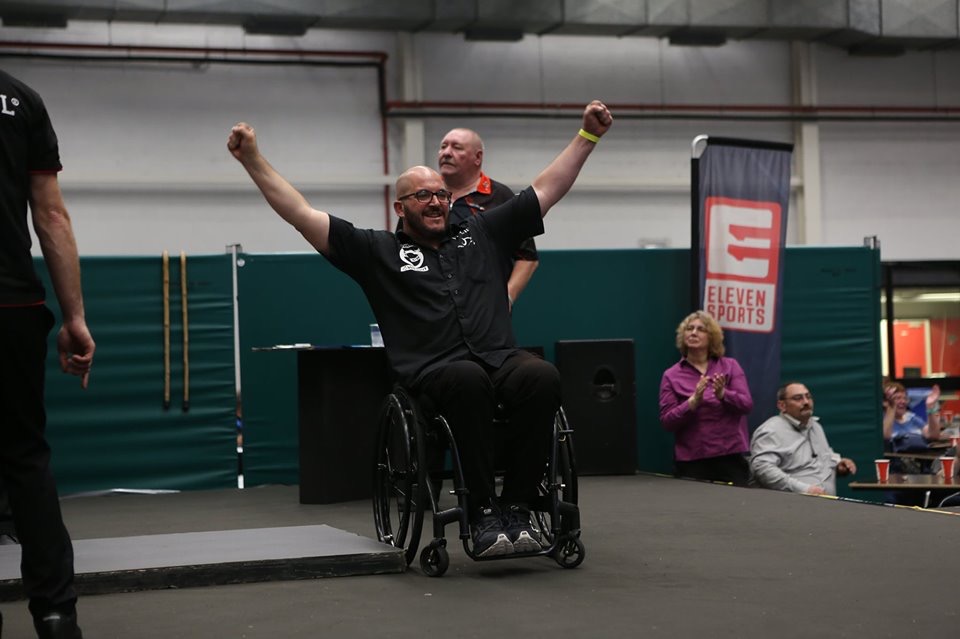 The densely-populated Dutch Open is always quite the spectacle. Thousands of players saunter through the De Bonte Wever doors, participating over a weekend of gruelling action.

32 of disabled darts’ superlative have been awarded with the opportunity of battling it out for the chance to be crowned the first disabled world champion. Belgium’s Vincent D’Hondt, the two-time World Masters champion, is one of those.

“With the support of Winmau it will be a wonderful event,” said D’Hondt. “It is the logical next step in disability darts that thanks to organisations in Belgium, the Netherlands and the UK has grown enormously.

“It is wonderful what Winmau does for this, yet everyone will be more focused on winning the world title – money is for a while, a title is forever.”

The WDDA World Championship’s establishment is testament to the enormous growth of disability darts, with the wildcards meaning for a truly international tournament as 13 different nationalities attend the tournament.

“It is fantastic to get so many different nationalities together,” D’Hondt added. “The wildcards were well spent for this.

“My only concern is that few wheelchair players have been able to place themselves directly. But I am sure that it will be a fantastic event.”

D’Hondt, who pinned a 90.18 average from his wheelchair in The Hague Disability Darts International quarter-finals two years ago, has continuously scooped titles on the disabled circuit since it picked up pace around five years ago.

Last year proved to be yet another successful season for the Belgian thrower, with trophies being lifted left, right and centre.

“The first half of 2019 was very good. I won the Dutch Open, the German Open and Masters, The Hague Disability Wheelchairs and the World Cup Wheelchairs Singles,” he said.

“With the Belgian team we won bronze at that World Cup. The second part of the year was quieter with fewer matches, though, with a win at the Bruges-Belfrey tournament.”

His back-to-back World Masters triumphs remain the pinnacle of D’Hondt’s career thus far, having lifted the second of those titles at the famous Lakeside Country Club in Surrey.

Having felt the exhilaration of reigning victorious on the renowned Lakeside stage, those moments will be tough to top – even being crowned world champion may not live up to the jubilation D’Hondt experienced four years ago.

He added: “My win in Hull five years ago was a dream come true – to defend the WDDA Winmau World Masters title a year later at the magical Lakeside was an incredible experience.

“From my childhood I watched the World Championship at Lakeside on TV. In the 90s when I noticed that I had talent as a young person, I wanted to play at Lakeside one day.

“When I stopped playing darts in 1996, this would remain a dream. The fate was ultimately favorable to me when I won the final there. This is the best moment of my career to date.”

As of October, that prestigious tournament – which contained so many memories for ‘Vinnie’, was supposedly discontinued by the British Darts Organisation.

The WDDA World Masters was abruptly scrapped leading to the formation of several other disability darts tournaments, including the upcoming World Championship.

“When I heard the news, I was disappointed,” expressed D’Hondt. “It was the biggest event on our calendar, and also labelled as the unofficial world championship.

“What particularly disappointed me was that the BDO, One80 and L-Style did not officially say anything about the WDDA tournament not taking place.

“In Belgium, the Netherlands, Germany, France and others, every international tournament organises a WDDA event. Why should the BDO not be able to do this at the World Masters?”

D’Hondt became eligible to participate on the disability darts circuit in 2002. He endured a freak accident in falling down a ladder, whilst connecting an above-ground electricity cable.

The 46-year-old has subsequently been essential in the recent growth of both wheelchair darts and the disabled sport as a whole.

“After my World Masters title at Lakeside, I predicted a big growth of the WDDA – growth that is currently going strong,” he stated. “This of course also entails some difficulties.

“In disability sports there are always discussions about a minimum disability. My suspicion is that that’s why the Compris Pathway started.”

The Compris Pathway is a new opportunity to become involved in disability darts. Even if you are subject to fit the Paralympic category, you can still participate at a higher level.

Now, in order to enter WDDA events, all you need is a government-registered Personal Independent Payment or Disability Living Allowance.

This system has been brought in by the WDDA to provide all government-registered disabled players with the option to partake, as well as scuppering the minimum disability confusion.

He added: “It is not yet clear to me where this will lead, but I hope it will benefit disability darts. I’m sure that it will continue to grow.”