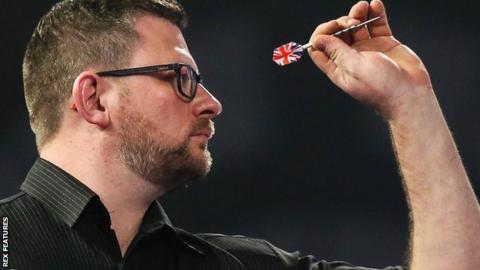 The final Players Championship before the World Matchplay saw many Winter Gardens fates sealed whilst James Wade picked up his fourth pro-tour title of the year.

With yet another title to add to the veterans ever-growing tally, Wade equaled his highest number of ranking PDC title ever won in a calendar year with six months still yet to play.

Jose de Sousa opened the hotly anticipated final with a 160 checkout to stake his claim for Players Championship 18. All the opening four legs were won on throw, but Wade hit his trustworthy double ten for the first break. Despite taking a 4-2 lead, Wade found himself level at 4-4 with de Sousa; the Portuguese man proving to be a tricky customer.

After taking a 5-4 lead, Wade was averaging nearly ten points lower than his opponent showing everyone that he still hasn’t lost his ruthless touch. Wade would win three of the next four legs to emerge an 8-5 victor to claim yet another title on the PDC floor.

Throughout the day Kyle Anderson has hung on to his World Matchplay spot despite losing in the first round to fellow Blackpool hopeful Ryan Searle. Ross Smith, Searle and Gabriel Clemens fell just short of the prize money needed as they all failed to make their required rounds and haven’t qualified for the last Euro Tour in Prague.

The Original would have been watching the finale of the event with despair as Dimitri Van den Bergh charged towards his first senior title which would have seen the Belgian overtake Anderson on countback. However, an inspired Jose de Sousa came from 4-1 down to win 7-5 in the semi-final to keep the Matchplay race run all the way to Prague for the Aussie.

The final PC event before the World Matchplay didn’t feature big names such as Raymond van Barneveld, Gary Anderson, Michael van Gerwen or Rob Cross. However, despite playing in PC 17, Gerwyn Price pulled out late on allowing youngster Callan Rydz to enter the pro tour for the first time since October 2017. The youngster took his chance knocking out Steve Beaton, Brendan Dolan and Chris Dobey on the way to the quarter-finals before losing to James Wade.

The 2018 World Championship semi-finalist Jamie Lewis has had a poor run on the tour this year and PC 18 only compiled the misery as he was convincingly beaten with a 48.8 average in a 6-0 defeat to Vincent van der Meer.

Mensur Suljovic, Michael Smith and Simon Whitlock all made it passed the first round but failed to do any real damage to the field, all being dumped out before the quarter-final stage.

Peter Wright was joined by Ian White, Adrian Lewis, Ricky Evans and Johnny Clayton in first round elimination despite winning five legs on the bounce against Martin Schindler.