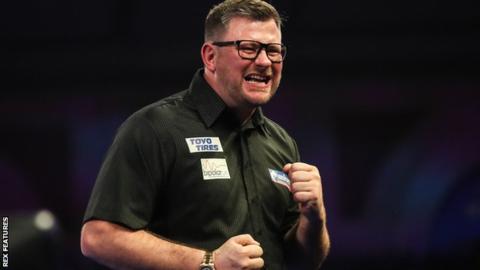 James Wade got back into the winner’s enclosure on Grand National day by triumphing at Players Championship 9 in Barnsley.

With many of the top players missing, including Gary Anderson, Gerwyn Price and Daryl Gurney, it still proved to be familiar faces in the final, with “The Machine” meeting Michael Smith for the first prize.

Wade saw off former BDO World Champions, Mark Webster and Christian Kist in the early rounds, before Peter Hudson and Arron Monk were dispatched to see the Aldershot ace into the quarter finals.

It was here where he dodged a major bullet, as he survived five match darts from Adrian Lewis to eventually triumph 6-5.

The semi final saw Wade meet a real emerging talent in Scott Baker. “The Mod” has made real waves since winning his tour card at the start of the year, and Wade squeezed past the Tipton man, coming through 7-6 to make the final.

His opponent in the final, Michael Smith, started off with an impressive 6-1 win against Finland’s number one, Marko Kantele, posting a 103 average in the process.

Dave Prins and Jose Justicia were ousted, setting up a last 16 all St Helens clash with Dave Chisnall. It was a high quality affair, and a 104.5 average was not enough for “Chizzy”, as Smith came through 6-5.

A lower quality 6-4 win over his practice partner, Ian White in the quarter finals paved the way for a last four clash with Steve West. If his win over Chisnall was a decent standard, Smith’s 7-5 win over West raised the bar even further. The match produced a 107.3 average for “Bully Boy”, with West’s at a mere 105.2.

Sadly, this was as good as it got for Smith, as he simply didn’t turn up in the final. His average dropped over twenty points to just over 84, as Wade was at his consistent best, posting a 98 average to ease to a crushing 8-2 win.

Wade trousered £10,000 for his efforts, and also picked up a first floor title since July 2015. It’s also his first win since his enthralling World Series of Darts win against Smith at the back end of 2018.

Things didn’t get any better post retirement reversal for Raymond van Barneveld. The unheralded Gary Eastwood, with just two wins to his name this season, dumped the Dutchman out in the first round with a 6-4 win. To put the defeat into perspective, Eastwood would be defeated 6-2 in the next round by Gabriel Clemens, with a 71.4 average.

Rob Cross didn’t fare much better, as Jose de Sousa completed a famous 6-2 win in the last 64. de Sousa would go onto the quarter finals, where Scott Baker edged him out 6-5.

Peter Wright and Mensur Suljovic both crashed out in the opening round, beaten by Jamie Hughes and Ross Smith respectively.

Mark McGeeney notched a nine darter in his opening round win against Adam Hunt. However, the Stockport thrower would be beaten in the last 64 by Steve West.

PC9 also saw a return to action for Corey Cadby. After a tense 6-5 win against James Richardson, the Aussie crashed out 6-2 at the hands of Vincent van der Voort.

Mathers doubles up at Event 11

Landmark Day for O’Donnell at Event 12