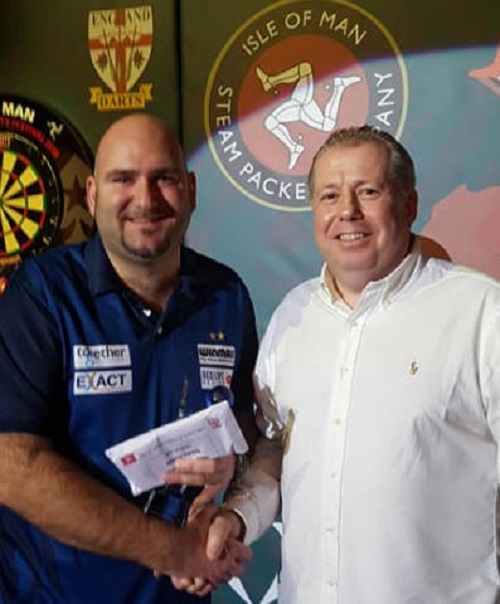 Waites and Turner the headline winners in the Isle of Man

Scott Waites and Laura Turner were victorious in the 2019 Isle of Man Pokerstars Open competitions this weekend, both taking their first titles of 2019.

The finals of the Open, played at the Villa Marina in Douglas, were the culmination of the four-day long Isle of Man Darts Festival, with the BDO-ranked Classic, WDF-ranked Masters and mixed Youth competitions all drawing to a close on Sunday.

Mitchell and Waites both fired in two maximums in what was a very tight game, as is to be expected between two of the organisation’s best players, with Waites eventually firing in a 21-dart leg to run out a 5-4 winner after surviving match darts.

In the final Waites met Dutchman Richard Veenstra, who beat his compatriot Martijn Kleermaker 5-1 in the semi-finals with a 90.8 average, adding to his victories over Simon Preston, Chas Barstow, Andy Hamilton and Martin Adams on the Saturday.

“Scotty 2 Hotty” had too much for the Dutchman in the final though, recording a whitewash 5-0 victory to win the Category A+ competition and pocket the £3,500 top prize. Waites went six darts deep into a potential nine-darter in the final leg, eventually going 5/7 on the doubles with a 102.95 average in the process.

Veenstra averaged 88.5 in his final defeat, but it was a successful day for the Dutchman, who picked up the Classic title earlier in the afternoon. The Classic had been played up until the final on Thursday evening, with Veenstra coming through the bottom half of the draw to face fellow countryman Willem Mandigers. In the best-of-seven-legs final, Veenstra was too slick for Mandigers, landing two maximums in a 4-1 victory.

Those performances move ‘Flyers’ to the top of the BDO rankings for the first time, with Wesley Harms second, Jim Williams third, Scott Mitchell fourth and Michael Unterbuchner fifth.

Turner took home the Ladies Open prize, the first Category A+ title of her career, after winning 4-2 in the semis against Dutchwoman Aileen De Graaf and by the same scoreline against Deta Hedman in the final.

Hedman was bidding for her seventh Isle of Man title in the final, having won her first all the way back in 1990. The final’s first five legs went against the throw, with Turner piling in a 106 checkout to move 3-2 up before holding her nerve with a 19-darter to secure the biggest win of her career to date. For her efforts, Turner takes home £1,500 and moves up to 7th in the Ladies BDO rankings.

It was a return to form for Hedman who has had a difficult start to 2019 by her standards, with the 59-year-old veteran producing a stellar performance to defeat Lisa Ashton in the semi-finals 4-2, averaging 77.4.

Lorraine Winstanley was victorious in the Ladies Classic, downing Fallon Sherrock 4-2. Winstanley had seen off Beau Graves, Joanne Clements, Suzan Konings, Danielle Ashton and Lisa Ashton on Thursday to make the final, where she came from behind to take the title and £850 in prize money.

Sherrock also tasted defeat in the WDF-ranked Ladies Masters final that was the second game on Sunday’s stream. The Masters was played all the way down to the final on Friday afternoon, with Lisa Ashton ultimately emerging victorious 4-2.

In the men’s Masters final, it was Dutchman Wesley Harms who continued his good form thus far in 2019 by defeating Andy Hamilton. Harms raced into an early 3-0 lead, only for former PDC World Championship finalist Hamilton to reel off three consecutive legs to force a decider. Harms would take that though in 14 darts, finishing the match with one maximum to his credit and an 85.4 average.

The opening game on the afternoon’s stream was the mixed Youth final, won by 12-year-old Lancastrian prodigy Luke Littler. Littler had picked up victories over Patrick Clowery and Dean Winstanley amongst others in the senior men’s competitions earlier in the weekend, actually reaching the last 32 in the men’s Open, before meeting the 2018 winner of the Youth competition, Beau Greaves, in the Youth final.

Littler won the first legs with a 92 average, before Greaves got on the board with a 107 checkout. ‘The Nuke’, would however, win the next two legs, finishing the match on double 2 to win 5-1 and trouser the £200 top prize. Littler averaged 74.7 in the final and with the likes of Deta Hedman citing him as a future star of the game, his name is one we can expect to see a lot more throughout the season.

The two other competitions played on the Sunday were the pairs events, with Rob Collins & Andy Jenkins winning the men’s competition and the tandem of Fallon Sherrock & Casey Gallagher triumphant in the women’s.

There is not another Category A+ competition on the BDO tour until the Welsh Open in mid-May but in the next week there are European double-header events in both Torremolinos and West Fries in the Netherlands in addition to competitions in Canada and Australia.

Dave Whitcombe – To The Point Podcast With Chris Mason