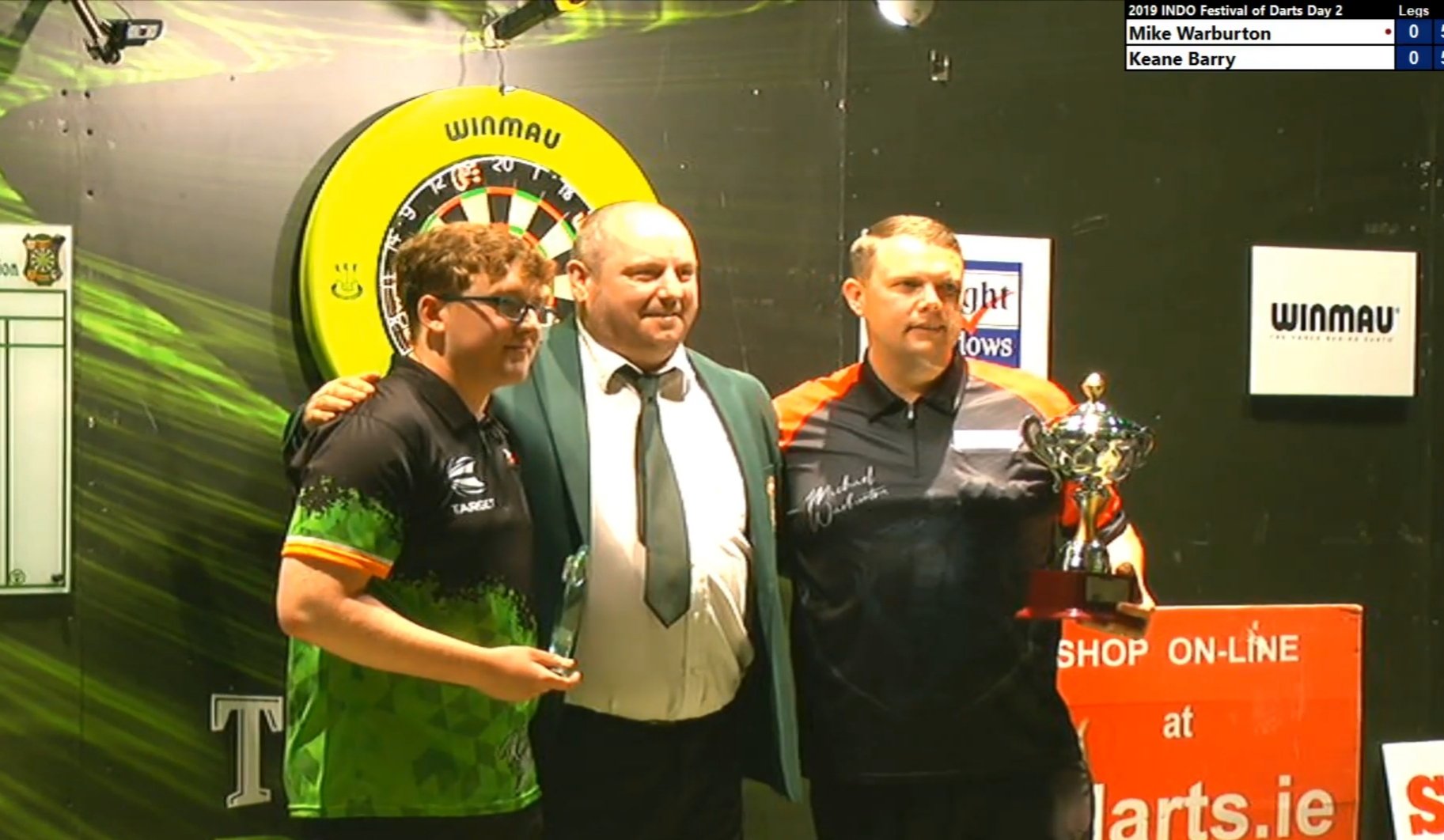 Mike Warburton did an impressive double as Fallon Sherrock and Maria O’Brien picked up titles at the Killarney Darts Festival in the Republic of Ireland.

New for this season, the weekender featured the Category A+ Winmau Irish Open and the Category C High Performance Roofing Singles and it was Warburton who stole the show with victory in both men’s competitions.

The Welshman won the Irish Open by defeating Keane Barry 7-6 in the final in what was a repeat of their meeting in last month’s Northern Ireland Matchplay semi-final.

Barry, who has been on an electric run of late, reached the final courtesy of a 6-2 win over England’s Anthony Allen, while Warburton beat Ciaran Teehan in the other semi 6-4, averaging 93.5 in the process.

The two matched each other through the first ten legs of the final before Warburton missed a few doubles, which allowed Barry to move 6-5 up and within a leg of a second BDO ranking title. However, ‘Warby’ held his nerve to win the 12th leg before firing in a maximum on route to winning the 13th and deciding leg, trousering €3,000 in the process.

Top seed Andy Hamilton crashed out of the Irish Open in the last 16, as did Kevin Painter, while recent World Masters winner John O’Shea was a losing quarter-finalist.

Warburton once again needed a decider on the Sunday as he picked up his third career BDO event win in the High Performance Roofing Singles. On this occasion, the likeable Welshman beat Scotland’s Ryan Hogarth to take home the title.

Kelso thrower Hogarth had moved 5-3 up and had darts in hand to move 6-3 ahead but his missed doubles gave Warburton an opportunity and he seized on it, winning four of the next five legs to once again win 7-6.

Sherrock won the Irish Open courtesy of a win over Kirsty Hutchinson. The Buckinghamshire ace had beaten Anastasia Dobromyslova 5-1 in the semis and she followed that up in the final with a 6-1 win that saw her average 85.8 and win the match with a 132 finish on the bull.

Hutchinson, who did the double in Northern Ireland last month, once again tasted success on the Emerald Isle, notably beating Aileen de Graaf 5-2 in the semis, but she could not match the relentless scoring of Sherrock in the final.

‘Obie’ took out 100 in the opening leg of the match as she picked up an early 2-0 lead, only for Hedman to then win four legs in a row and seize back control. However, the Plymouth thrower then picked up a quartet of her own to secure the win with a 75.9 average.

Dylan Slevin starred in the weekend’s youth events, reaching both finals and winning one title.

Slevin won the Irish Open with a victory over Mark Griffin but he fell short on the Sunday, losing out to James Beeton 4-1. Beeton, who recently hit a nine-darter on the PDC Development Tour, was superb in the High Performance Roofing final, finishing with an average of 88.

The men’s pairs title was won by Garrett Gray and Keith Rooney, while Hedman and Lorraine Winstanley took home the ladies pairs crown.