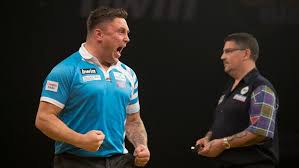 Was the price right for you?

I won’t alienate the entire darting world by either saying Price should have been fined more, or not fined at all. This is a divisive issue and feathers have obviously been ruffled. It might suffice to say that I think some sanction was in order, but not this much.

Nor am I going to make any fuss about Gary Anderson or James Wade, what either player should be, or should have been fined. It’s all about opinions, for the time being I trust the DRA and I am glad we have them to preside over tricky matters such as this instead of leaving things to the judges and juries in the crowd.

NOT saying darts fans are not entitled to their views, or to express them, no way! While we still have this freedom we should use it and if you want to tweet me to have a go at me for owing up to still being a big Gerwyn Price fan, more strength to you for that @NineteenDarter and I welcome the debate, if kept above the belt.

No, my reason for writing this is to look at the affair from a different angle. The fine has been issued now and I imagine won’t be overturned, or even appealed. Done, dusted and soon to become old news.

But does this set a precedent that we don’t want in darts? Sure, the fine was understandable even if high, so please don’t think I am writing to say we should let players behave however they want on and off the oche. There have to be standards, and perhaps yes Gerwyn Price crossed the line. Doesn’t take the DRA to see that.

Only, if we fine Price 21 grand for this, then who’s next and what for? Even if you didn’t like what he did, and wished he’d tone it down a bit, if he hadn’t gone quite this far would we still be talking a fine, only a smaller one?

To what degree was he aggressive and how far was this just passion for the game? And can we all agree on where to draw the line?

Other players have done similar things and I won’t annoy anybody by making a list. And in some cases they have been fined too. My point is not to let them all off. That would set a worse precedent.

Price gets fined for some serious yelling. So next time a player lets off steam, or almost this much steam, how long will it be before fans of other players start saying that their behaviour smacks of Gerwyn Price and they should be fined too? MVG yells a bit too (although he is plainly an absolute gent with it). But he yells, that could be open to interpretation, and people will always see things differently. So a player shouting  for joy when they hit a crucial big finish, will that look like Gerwyn Price? Are we trying to get this out of the game too?

Such a tricky area, I am going to leave this article without offering any final conclusions because people will read into things differently and what to one person is passion will to others seem aggressive. My opinion is no more valid than yours.

And herein lies the problem. From now on, are some fans going to cry FINE HIM whenever any player lets their guard down after hitting a 141 finish in the later stages of a big money game, just because this is what happens, I mean, fining players is what becomes the norm?

I sincerely hope not!

BetVictor Masters 2019 – Everything You Need To Know