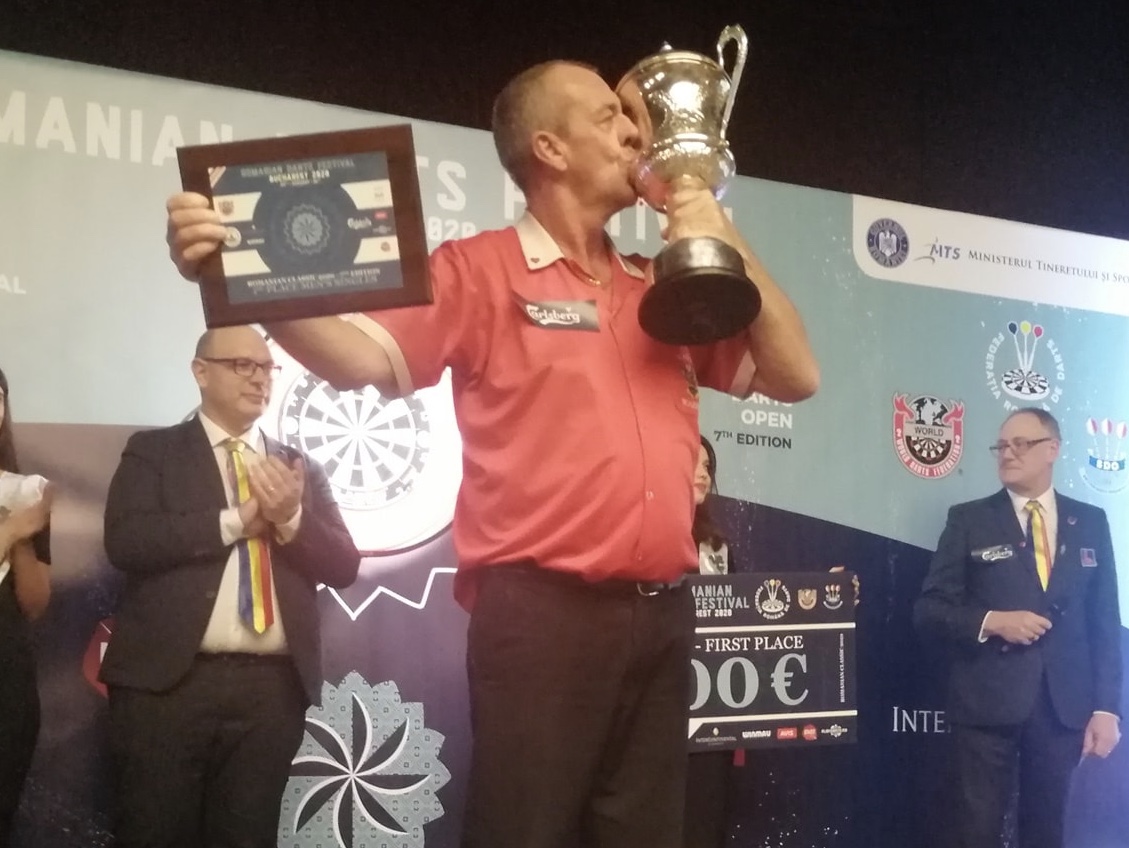 Wales’ Wayne Warren and Nick Kenny reigned victorious as the Romanian Darts Festival took place at the Intercontinental Hotel in the heart of Bucharest.

Newly-crowned BDO world champion, Warren, got the ball rolling with three successive whitewashes on Saturday, before moving into the quarter-finals with comfortable victories over Andrei Alex Vecliuc and Loukas Trypinioti.

The Welshman then recorded a 87.1 average in seeing off Steve Giddings and completed a 5-3 victory over Stourbridge’s Nick Fullwell, pinning checkouts of 104 and 130 en route to booking his place in the final.

Warren raced out of the gates in the decider, with former Catalonian Open winner Marti being left to watch the world champion in full flow, as ‘Yank’ gained a 5-0 advantage.

57-year-old Warren was then forced to survive a rally of legs from his opponent, with the Catalonian reeling off three in succession and moving within two, though, the Welshman held his nerve to seal the deal.

Warren was defeated in the quarter-finals of the WDF silver-ranked Romanian International Open, with Anthony Allen clocking a scintillating 95.9 average in handing him his first loss since his maiden World Championship success.

It was his good friend Kenny who lifted the prestigious trophy, with the newly-instated PDC tour card holder commencing his competent campaign with a sub-70 average in beating Terry Redhead, before producing back-to-back whitewashes.

The 26-year-old subsequently averaged 95 in defeating Romanian Classic finalist Marti, prior to sealing his place in the semi-finals with victories over Kostas Pantelidis and Craig Venman.

Kenny was not well liked by the Romanian audience come the end of the action. The Welshman not only denied an all-Romanian final in beating Adrian Frim in the last four, but he also overcame the home favourite in the final.

The opening six legs of the decider went with throw, with Kadar pinning a blistering 161 checkout in the fourth to remain in contention. However Kenny began to plug away from there, winning two in succession to move within one of the title.

Former World Masters participant, Kadar, pulled one back with a 13-darter, only for Kenny to hit double 16, before erupting into wild celebrations amongst the hostile Romanian crowd.

Hedman dropped just four legs en route to lifting the trophy, and produced averages of 87.1 and 89 leading up to the final.

As for Harwood, she claimed her fifth BDO ranking title and her first for almost three years as she regained her Romanian Classic crown.

The 45-year-old had previously won the tournament six years ago, defeating Bulgaria’s Anelia Eneva in the final.

Prior to the weekend’s singles tournaments taking place, the Romanian pairing of Gabriel Pascaru and Adrian Frim embarked on a run to the Romanian International Open pairs final, being narrowly denied by England’s John Scott and Jason Lovett.

The women’s pairs tournament was won by Ksenia Klochek and Elena Shulgina – who overcame Anna Hlavova and Shereen Downs.

Full results from the Romanian International Open can be found here

Full results from the Romanian Classic can be found here