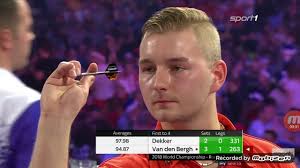 Where have all the young men gone?

Following darts this year, as closely as I do, and I can maybe be forgiven for thinking that it was not only Phil Taylor who retired at the end of last season.

Coming into the latter end of the 2017 season and we had the likes of Dimitri van den Bergh playing some awesome darts, and with him Jamie Lewis who, as you know, reached the world semis (and might have written a different story had he kept his mind fully on the task, and not let his thoughts wander to what the evening might have meant otherwise).

If you get to the quarter or semi-finals of any major darts tournament, plain fact is, you are VERY good at darts. So forgive me for over-simplifying, but, if you can advance to the later stages of the biggest tournament in the world, what stops you picking up lesser honours but a few months on?

I am not writing this to pick on young darts players who have ‘let the side down’. Nobody has let anybody down, people still rate these two young players very highly and I for one still hint at the possibility of the Dream Maker getting to World No 2 by 2020 (although I am not quite as confident asserting this as I was in December).

Both Jamie Lewis and Dimitri van den Bergh have played well this year, but are sadly not living up to earlier promise. It’s a long road, I am sure they can get back on track for the Top 10, but what’s keeping them?

Another top player who hardly seems to have featured is Dave Chisnall. To be fair, while we are all glued to the Premier League, players like Dave, along with James Wade and Adrian Lewis will get less attention and therefore it may seem like they are maintaining a low profile, but with Chizzy, I can barely remember hearing his name mentioned this year.

Ah, no, I tell a lie… I logged onto Youtube to watch the Premier League Week 13 games, and Dave Chisnall came up. It was last year’s match. That’s all I have seen of him.

I would say that he is one of the most popular players. The boss of the 60, a down-to-Earth guy, nothing pretentious about him at all. It would just be nice to see him challenging more for major honours.

Darts needs a blend of new champions to keep the game fresh and exciting, but it also needs the old guard to win regularly too, so as not to create the impression that they take it in turns to win things. Class versus form. If there are no true champions who hold their place at the top of the game, the likes of whom you may put your mortgage on, then it starts to seem like anybody can turn up and win something.

Sometimes we want to see a stalwart Top 4 player holding a trophy, and all remains well with the world. Other times, we want a young pretender to upset the apple cart, to keep the game from standing still. Max Hopp, notably, and congratulations to the lad.

That is why people, even loving Phil Taylor, even preferring Rob Cross, wanted to see Jamie and Dimitri finishing legs in style at the Ally Pally. We like to see good play, whoever it comes from, and if it comes from a fledgling professional, all the better.

So, this year, have the fortunes of these two young lads been surprising? Disappointing even? And do darts fans still expect them to get to the top of the game?

I will stick my neck out. By 2020, Jamie Lewis will be Top 20. And Dimitri van den Bergh will be Top 10. I can’t continue to tell people he is my tip for No 2, because he has not built on last season’s classy showing. And darts is getting more competitive year on year.

Photo Courtesy of You Tube