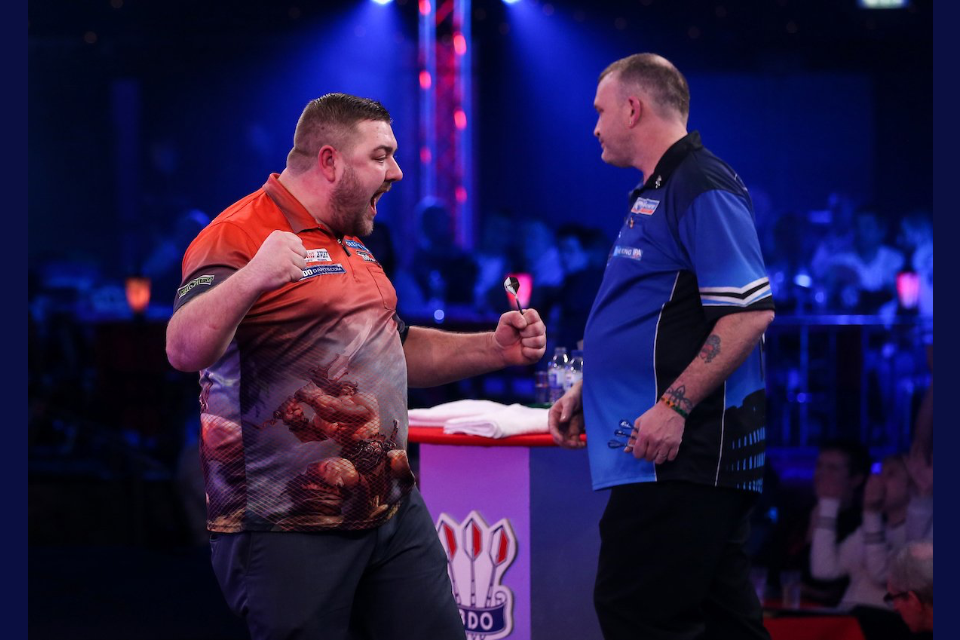 Conan Whitehead produced a rampant display to whitewash the number one seed Mark McGeeney in the last 16 of the 2019 BDO World Darts Championships at Lakeside. Jim Williams and Scott Waites also produced impressive displays to book their respective places in the quarter finals.

Conan Whitehead came into his last 16 clash with 2018 runner up Mark McGeeney as major underdog, despite having fought past Martin Phillips in a deciding set in round 1. McGeeney had come through a tough test himself, defeating Derk Telnekes 3-1. It was Whitehead who flew out of the gate, breaking McGeeney’s throw in the very first leg after Mark missed two darts at double. Whitehead held his throw on double 8, before McGeeney got off the mark with a superb 90 checkout on the bull. However, Conan was not to be stopped in this set, checking out a superb 119 checkout on tops to take the first set and lead 1-0. The first three legs of the second set were all holds on throw, with Whitehead leading 2-1. McGeeney missed five darts at double to send the set into a decider, but missed them all, allowing Whitehead to pin double 5 and open up a 2-0 lead. McGeeney held his throw in the first leg of the next set, knowing he realistically had to win it if he wanted to get back in the match. Whitehead hit back with a hold of his own, before nailing a crucial 105 checkout on the bull to break Mark’s throw while he was waiting on 40. Conan showed no signs of nerves in opening up a three set lead, firing in a spectacular 12 dart leg to lead the first seed 3-0. McGeeney broke the throw in the opening leg of the fourth set, knowing he had to win it to stay in the match. Whitehead hit straight back however, nailing double 8 after McGeeney missed double 7 for a 122 checkout. Both players held their throws to send the set to a decider, and with a fabulous 12 dart leg, it was Conan Whitehead who finished off what could be considered the shock of the tournament in hammering the top seed Mark McGeeney 4-0. Whitehead’s very vocal supporters were shouting their approval, with Conan’s joy absolutely clear from his reaction. It was a disappointing display from McGeeney, who only averaged 86, but take nothing away from Conan Whitehead, who showed no signs of nerves in winning the biggest match of his career to book a spot in the quarter finals of the World Championships.

Whitehead’s opponent in the last 8 will be two time world champion Scott Waites, who battled through a tough tussle with the Dutch man Richard Veenstra. Waites had come past Jeffrey van Egdom in round 1, while Richard had fought past Nigel Heydon in a spectacular deciding leg. The first set went all the way to a decider, after Veenstra had come from a couple of legs down, firing in a terrific 11 dart leg along the way. Waites fired in a maximum to give himself first shot at double, but would miss three clear darts at 36. This gave Veenstra a shot at 64, which he converted in two darts to lead the match 1-0. Waites broke the Dutch man’s throw straight away in the second set after Veenstra missed three darts at double. Both players held throw, which gave ‘Scotty 2 Hotty’ an opportunity to throw to level the match. Richard fired in a 180, giving him a shot at 97, but he missed two darts to set up a deciding leg, giving Waites 101 for the set. Despite hitting the treble 5 with his first dart, Scott pinned double 16 to take a crucial leg and level the match. Veenstra won the opening two legs of the third set, after Waites missed three more darts at double 18, which was turning into his enemy. Richard set up 59 for the set, but he missed two shots at the outer ring, allowing Waites to pull a leg back. Scott threw a brilliant leg to break Richard back and set up a hugely important deciding leg in the set. Scott missed a shot at the 156 on double 18 to give Veenstra a chance to take out 105 for the set. Richard nailed the treble but wired a dart at tops, allowing Waites to step in and pin double 9 with a nerveless dart to take a crucial set and lead 2-1. With excellent legs of 15, 14 and 13 darts, Scotty 2 Hotty opened up a 3-1 lead over Veenstra at the second interval. Richard was not finished, breaking Scott’s throw in the opening leg of the fifth set with a 48 finish. However, Waites broke straight back with a 12 darter before firing in an outstanding 160 finish to go within a leg of the match. This shot seemed to knock the stuffing out of Veenstra, as Waites finished the job on double 10 to move into the quarter finals. Veenstra will feel the 4-1 score line was harsh on him, but kudos to Scott Waites, who produced a very decent display to book a spot in the quarter finals.

Jim Williams was the other man to come through a last 16 match tonight, as he comfortably saw off the below par Dean Reynolds with an impressive performance. The third seed Williams had to see off a major fight from Justin Thompson in round 1, while Reynolds had seen off Daniel Day. Williams could not have got off to a better start, firing in two consecutive 180s to give himself a shot at the 9 darter in the opening leg. He nailed the treble 20, but missed the 57 to the crowd’s disappointment. He cleaned it up for an 11 dart leg, before firing in two 15 darters to take the opening set in double quick time. Reynolds was struggling, but managed to get off the mark in the opening leg of the second set after Williams missed five darts at double. However, Jim replied with a solid hold of his own before breaking Dean’s throw with a superb 13 darter. He finished the set off with a 90 finish on double 20 to take a commanding two set lead. Williams took the opening two legs of the third set, before missing a dart for a 3-0 lead which allowed Ryan to pull a leg back. The reprieve did not last long though, as Jim nailed double 8 to go within a set of the match. In the end, the Welsh man closed it out very comfortably, taking the final set without allowing Reynolds a shot at double. It was a well below par performance from Reynolds, but it was a terrific display from Williams, who averaged almost 92 and was deadly on his doubles. His quarter final against either Scott Mitchell or Krzysztof Kciuk is likely to be a much tougher test, but you can’t take anything away from Williams’ display in moving into the last 8.

Gulliver fights back to defeat Podgorska at Lakeside