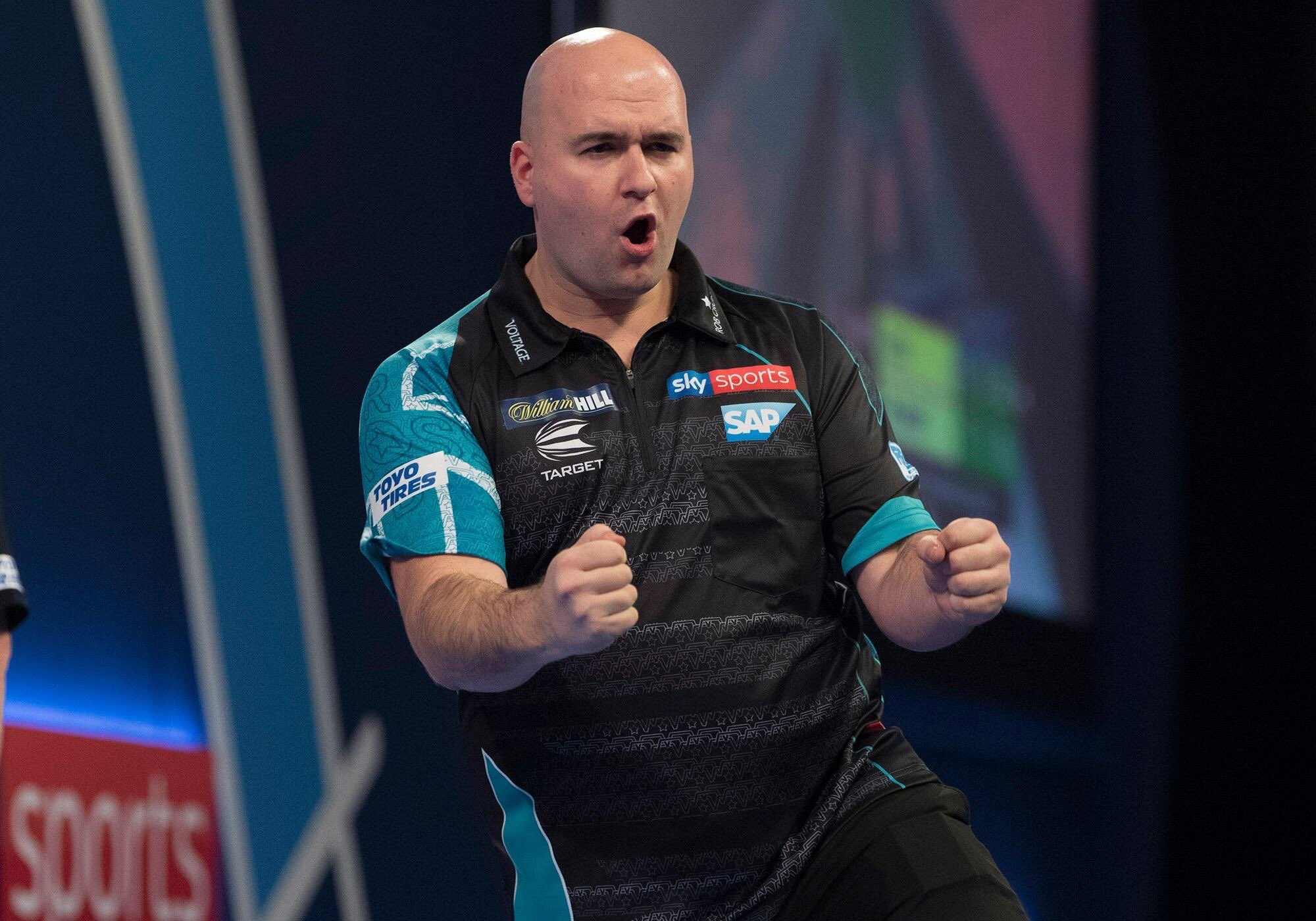 Lewis denied Darius Labanauskas with ease as ‘Jackpot’ whitewashed the Lithuanian 4-0 to book his place in the fourth round.

Lewis exited at the first hurdle 12 months ago and has certainly made up for that; setting up a last 16 clash with world number one Michael van Gerwen.

The Stoke-on-Trent-based two-time world champion comfortably took the opening set before continuing is rout with a 3-1 win in set two to double his lead.

Labanauskas got his second leg on the board, but his below-par performance was jumped on by Lewis – who pinned tops to move on the verge of the fourth round. Three maximums and legs of 13, 17 and 12 darts ensured ‘Jackpot’ a convincing victory.

Defending champion, Rob Cross, produced another five-star display to go with his top-notch performance against World Matchplay semi-finalist Jeffrey de Zwaan in the second round.

Cross reigned victorious in January as he denied Phil Taylor a fairytale ending and will be looking to become the first man to win the title on debut and then retain it the following year.

‘Voltage’ started in a fragmentary way and didn’t hit a single 140 in the opening set, but took the opening set 3-1 before doubling his advantage with a 3-0 win in the following set, as he started to up his standard.

Reyes took the opening leg of the third set, only for Cross to checkout in 12, 13 and 15 darts to move ever-closer to a forthcoming victory.

‘The Spartan’ kicked off set four in style as he hit back-to-back maximums before hitting the the seventh perfect dart, only to witness his eighth dart fall millimetres above the treble 19 bed. Cross then won two consecutive legs, hitting a 147 outshot to win the second, before Reyes took the set to a decider with a 10-darter.

The world number two eventually closed out a whitewash win with a 76 checkout to book a fourth round meeting with either back-to-back world youth champion Dimitri van den Bergh or back-to-back Development Tour winner Luke Humphries – who will contest their third round clash on Thursday afternoon.

Chris Dobey came through a thrilling third round encounter with Vincent van der Voort as he averaged 97.87 in setting up a fourth round meeting with Gary Anderson.

Dobey – who hadn’t dropped a set before his win over van der Voort – lost the opening leg of the match, but won three consecutive legs in 14, 11 and 13 darts to seal a 1-0 lead, in what was set to be a close clash with nothing between the pair in the PDC’s rankings.

The next three sets all went with throw, with Dobey winning the second of which with a 110 average, as the scores were level at two-a-piece going into the fifth set of the match.

The ‘Dutch Destroyer’ pinned three maximums in set five; which he won convincingly 3-0 to gain an advantage in sets for the first time, only for Northumberland’s Dobey to reel off three successive legs to level up proceedings at 3-3 and send the match to a decider.

The Players Championship Finals quarter-finalist took the lead in the final set, with van der Voort equaling courtesy of a timely 106 outshot.

Dobey won the next two legs to wrap up a 4-3 win and book his place in round four in London.

Brendan Dolan booked his place in the World Championship last 16 for the first time in his career as he came through a hard-fought battle with seeded star Mervyn King.

Much like Chris Dobey, Dolan – who qualified for the World Championship for an eleventh successive year after a good season on the circuit – hadn’t dropped a leg in his opening two matches as he whitewashed both Joe Cullen and China’s Yuan Jun Liu.

The Northern Irishman flew out of the blocks; hitting two 14-darters and a 116 outshot in the opening set as he gained a 1-0 advantage.

Dolan doubled his lead, courtesy of a 126 checkout and his opponent, King, experiencing back pains which clearly hindered him during an out-of-sorts display.

King battled back, as he hit a 14-dart leg to half the deficit before back-to-back 14-darters in set four enabled him to level up the match at two-a-piece. An impressive 12-darter handed Dolan the advantage once again, and moved ‘The History Maker’ on the verge of victory.

Dolan continued to ace the outer ring as he upped his ton-plus checkout tally to five with checkouts of 105 and 107 to win and set up a fourth round clash with either Toni Alcinas or Benito van de Pas.

James Wade silenced the Alexandra Palace crowd as he fought back from 2-0 and 3-down to deny Keegan Brown a spot in the last 16 for a second successive year.

Brown – who defeated former semi-finalist Wade in the first round last year in London – won deciding legs in both of the first two sets to hold a commanding 2-0 lead. Wade pulled a set back courtesy of a 12-dart leg and a 122 outshot, only for Brown to increase his lead once again with legs of 15, 17 and 13 darts to complete a 3-0 whitewash in set four and regain his two set advantage.

‘The Machine’ whitewashed Brown in set five before pinning tops with his last dart in hand to level up proceedings at three-a-piece. It was a commanding performance in the final set from Aldershot-based Wade – who hit two 15-darters and a 13-dart leg to close out a narrow victory. He’ll face debutant Ryan Joyce in the fourth round, as Joyce defeated Alan Norris in the third round on Saturday afternoon.

Nathan Aspinall continued his groundbreaking World Championship performance as he thrashed Kyle Anderson 4-1 at Alexandra Palace to set up a fourth round clash with either Steve West or South Africa’s Devon Petersen.

Anderson took the opening two legs of the affair but a 120 finish from Aspinall handed him the opening set. ‘The Asp’ produced two 14-dart legs, a 13-darter and a scintillating 148 checkout en route to doubling his lead.

The Aussie pulled one set back but Stockport’s Aspinall found double 12 to move on the verge of victory. Anderson led 2-0 in what was to be the final set, only to witness his opponent, Aspinall, convert finishes of 120, 87 and 50 to book his place in the last 16 of the World Championship.

We will have no darts on our screens for three days now as the festive break takes place, but the action will resume on Thursday evening as the third round comes to a halt.

Anderson comes through thriller with Wattimena while van Gerwen breezes through