HomeBlogWhitlock Involved In Social Media Spat With Unicorn Over Board Damage 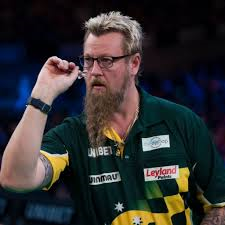 Whitlock Involved In Social Media Spat With Unicorn Over Board Damage

Simon Whitlock has become involved in a war of words with Unicorn after more damage was reported to the oards used in PDC tournaments.

Managing Director of Unicorn, Edward Lowy, replied to a Tweet criticising the boards for damage early on in Whitlock’s last 16 Matchplay tie with Peter Wright on Wednesday night.

Lowy suggested it was more to do with the points being used by Whitlock, and also suggested the same damage was done in the Aussie’s previous match with John Henderson.

Unicorn themselves suggested that the points Whitlock was using were ripping the sisal out of the Eclipse Pro HD2 boards.

“Just wanted to confirm when I last looked at my birth certificate, my name was Simon Whitlock NOT Whitlock (As used by Unicorn in their Tweet)

”As for the constant blaming me publicly for damaging your dartboards, please ask your own sponsored players for their honest views” Said Whitlock.

”I have done nothing wrong. Only try and improve my game and have less bounce outs and allow my dart to enter the board and remain in the board at the correct angle for the following dart to lay correctly. The constant singling me out is annoying and unjust”.

Whitlock went on to say he knows of at least “7” Unicorn endorsed players that shared his views. The criticism of the boards used on the PDC Tour has regularly come into question. Unicorn have been the PDC’s board supplier for many years now, and it’s unclear weather this will change anytime soon.