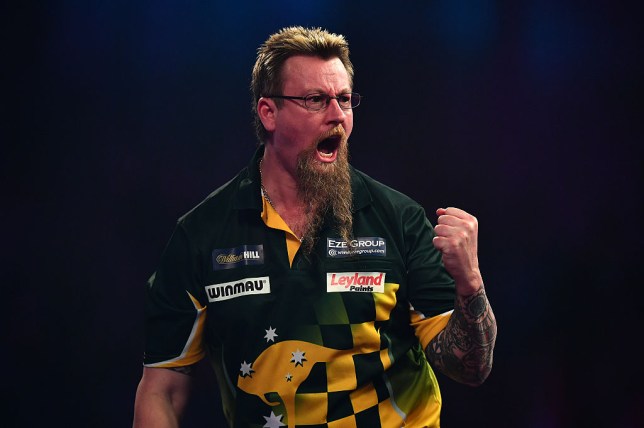 Groups Four to Seven of the event streamed live from players’ homes took place from Monday to Thursday as the overall table took further shape, from which the top seven will qualify for the Championship Group.

In the first group of the week, Simon Whitlock showed why he’s still ranked in the top 20 with six wins out of six, including victories over Kirk Shepherd and James Wilson where he averaged more than 99.

The Australian finished six points ahead of anyone else, with Wilson, Kai Fan Leung, Richard North and Martin Schindler all winning exactly half of their games.

Tuesday’s Group Five saw another established player storm to the top of the table with Krzysztof Ratajski taking the honours.

Nathan Derry withdrew before the end of the day having played four matches, so those matches, which Derry all lost, were expunged from the standings.

Ratajski won all five of his matches, the most impressive of which was a whitewash of Ryan Meikle with an average of 111.

The final two players, Ron Meulenkamp and Stephen Bunting, both played some decent stuff throughout the day, but could only get two points apiece.

In Group Six, Chris Dobey ensured he would finish the week top of the overall standings after collecting 10 points, finishing narrowly ahead of Carl Wilkinson in the daily table.

Despite a 104 average for Barnsley man Wilkinson in a win over Dobey, ‘Hollywood’ finished top by virtue of a superior leg difference.

Andy Hamilton had two ton-plus averages throughout the day, but was too inconsistent to finish in the top two as he had to settle for third place.

Peter Jacques and Gary Blades had solid days, while Geert Nentjes and Barrie Bates rounded out Wednesday’s group with two points each.

On Thursday, it was another group that came down to leg difference, this time Alan Tabern edging out Andy Boulton.

Despite an overall average of 98 for Boulton, his 4-1 defeat to ‘The Saint’ in the pair’s final game of the day ensured Tabern finished top by five legs.

Those two were the best players of Group Seven by a considerable distance, but Martijn Kleermaker, Ross Smith and Steve West all managed three wins.

David Pallett and Martin Schindler didn’t do their chances of making the Championship Group any favours after both lost five of their six contests.

In that overall table, it’s still early days with only a third of the campaign played, but Dobey and Boulton have a six-point advantage over everyone else.

Wilson, Whitlock and Tabern are among the other players well-placed to qualify after two weeks of Home Tour III.

The tournament takes a break next week due to the PDC Winter Series but will return on Monday, 23 November with Group Eight.