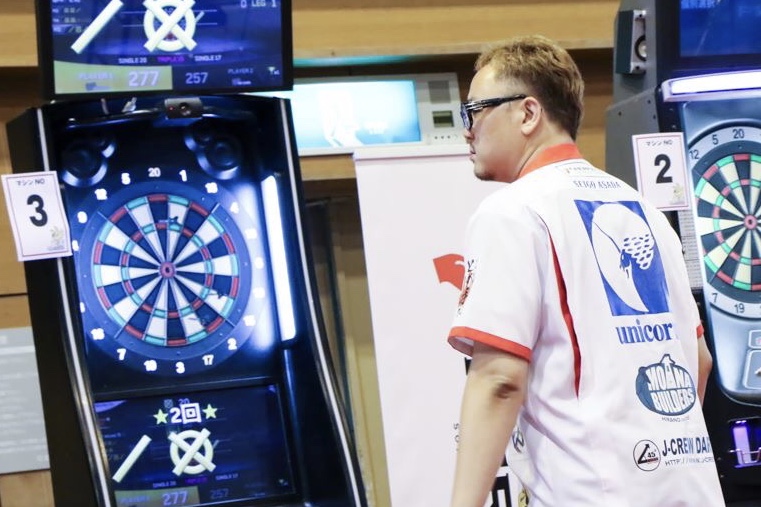 Japan reached the World Cup of Darts semi-finals in June, becoming the first country of Asian descent to do so. Seigo Asada and Haruki Muramatsu performed to the standard we all knew they could and beyond.

The Japanese duo stole the nations heart, as did another Asian pairing in Singapore’s Paul and Harith Lim – who are renowned for causing upsets, and did so once again as they trounced the highly-fancied Wales, two years after stunning Scotland.

Singapore and Japan both injected that ‘international’ effect into the World Cup of Darts, and they also placed a question in the minds of many viewers: why don’t more Asian arrowsmiths head to Qualifying School and have a go at testing themselves within the pinnacle of the sport?

Royden Lam and Haruki Muramatsu are the only Asian darters to have possessed a PDC tour card. Hong Kong’s Lam won his in 2013, before losing it the following year, and then regaining his ‘golden ticket’ in 2017, only to once again lose it after his two-year ownership ceased. Japan’s Muramatsu owned a tour card during 2015 and 2016. It’s safe to say the 2013-2018 era was a good phase for Asia on the PDC ProTour.

Both players were playing soft-tip darts throughout the course of being on the PDC ProTour. Played on a plastic dartboard, it resembles a way of getting the younger generation into the sport without having to throw pointy, hazardous missiles. But, it’s more than that.

There are thousands and thousands of pounds up for grabs on the soft-tip side of darts with shedloads of viewers streaming the events worldwide, and Asian players – such as Lam, Muramatsu and Paul Lim – always at the backend of events. They aren’t going to risk a huge earner for a circuit where they will be unproven in the PDC.

Yes, they would gain a higher status in the sport of darts, but in Asia they are already categorically well-known thanks to their exploits on the soft-tip scene – which is significantly bigger than steel-tip in the eastern world.

Let’s take Seigo Asada for example. A predominant soft-tip thrower, but a man who is a regular occurrence in the PDC World Darts Championships, PDC Asian Tour and the World Cup of Darts.

‘The Ninja’ won at least 15 out of 32 Perfect Tour titles in 2018, earning a staggering £130,750. If you added his World Championship, Asian Tour and World Cup of Darts winnings to that, his payroll towers over £167,000 for one calendar year. Yes, he could potentially earn more than that in the Professional Darts Corporation, but it’s very unlikely bearing in mind his current level and where he’d stand if he played to his PDC Asian Tour standard on the PDC ProTour.

Asada’s three-dart average on last year’s PDC Asian Tour was 86.39. This would rank him 126th on the Players Championship averages and 33rd on the PDC Challenge Tour averages. Are you going to earn a groundbreaking £167,000 a year if you are playing at that level in the PDC? Probably not.

Obviously, Asada’s level will significantly rise if he was to play in the PDC. He’s shown it at the World Championships as he pushed James Wade to the limit, and he’ll get tested a lot more on the ProTour, but the point still stands.

According to the Faria Darting Index (FDI), Asada’s current level is 1647. To put that into perspective, it’s the 88th highest out of the 128 PDC tour card holders, and a similar calibre to the likes of Vincent van der Meer, Yordi Meeuwisse and Stephen Burton.

A recent simulation, ran by Lendel Faria himself, proved that Japan’s Asada would obtain approximately £299 per Players Championship event – that’s £9,000 a year. A little far off that £130,000-plus he acquires playing the Perfect Tour in soft-tip.

Evidently, that £9,000 is only from Players Championship events and doesn’t include the winnings he could potentially acquire from the European Tour, UK Open, World Championship, World Cup of Darts, and the like.

DartsLive’s The World is another soft-tip circuit that features the best in Asia. Lourence Ilagan, Paul Lim and Royden Lam all reached finals on the five-stage tour, with Hong Kong’s Lam clinching the $30,000 crown after winning the Grand Final.

The World stages prize fund is at a similar rate to the PDC Players Championship events, but of course the Asian throwers who are in question will have a much higher chance of winning.

Of course, we want to see more players of Asian descent locking horns with the best in the sport, but we can’t expect them to drop thousands and thousands of pounds, a life with their family at home and probably in a country they cherish – when they already have huge tournaments and a sport they adore at home in soft-tip darts.

For now, until the PDC establishes more tournaments on the Asian continent, the Asian arrowsmiths’ biannual visits for the World Cup of Darts and World Championship will remain a regular occurrence.

Ben Hudd Ben is a dedicated sports writer and has been covering all forms of darts for a number of years, from the grassroots to professional level.

Players Championship Finals: Price prevails as Anderson battles back from the brink

Can You Hit BULLSEYE For £25,000?? | William Hill World Darts Championship

Players Championship Finals: Price prevails as Anderson battles back from the brink

Quiz: How Well Do You Know the Grand Slam Of Darts?

Quiz: How Well Do You Know the World Matchplay?

Quiz: How Well Do You Know Target Darts?