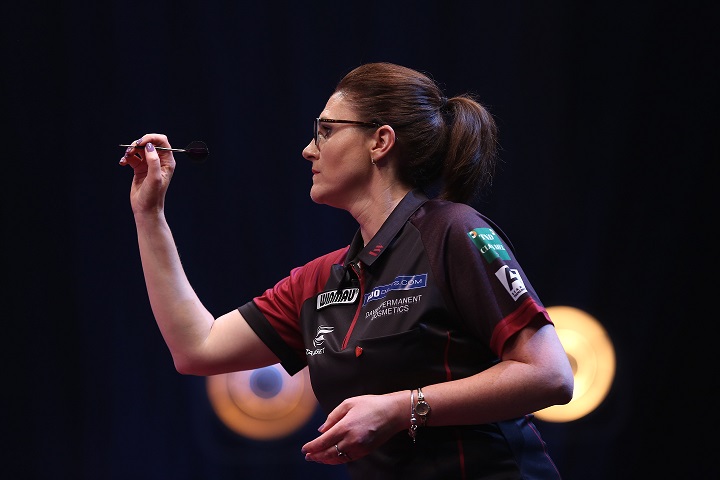 Ben HuddLatest Darts News
By Ben Hudd
0 Comments
Lorraine Winstanley has been a real force in the ladies’ game as of late and spoke to us in an exclusive interview ahead of the Ladies’ PDC World Championship Qualifier on Sunday.
Stadium MK will host the inaugural UK and Ireland Ladies’ PDC World Championship Qualifier as a field of 153 women battle in out for the second of the ladies’ spots on offer.
Winstanley has undergone another fantastic season on the BDO circuit. After winning the Winmau World Masters last year, she has gone on to win the Czech Open, Northern Ireland Open and reach the final of the BDO World Trophy, loosing out to Fallon Sherrock in a high-quality final.
When asked how she found her way to the oche, Winstanley said: “I started playing darts at 18 when I worked in a pub. I sometimes used to do the quiet lunch time shifts and ended up playing with the locals. And it all stems from there really.”
The 2017 Winmau World Masters was Winstanley’s maiden major title on the BDO scene as she beat her good friend Corrine Hammond in the final; “Winning the Winmau World Masters was absolutely amazing. I’ve said it before but anything with a ‘world’ in the title is pretty awesome.”
Winstanley’s good friend Anastasia Dobromyslova, who she beat en route to that monumental World Masters victory, qualified for the William Hill World Darts Championship last weekend in Düsseldorf as she whitewashed Silvia Dolores Keller in the final.
After the three-time World Champion’s success a week ago in Düsseldorf, there is just one more spot up for grabs at Alexandra Palace and with 153 ladies fancying their chances, it’s going to be a tough day at the office for Winstanley: “Of course it’s going to be really tough to get that one place in the PDC World Championships and there will be plenty of other quality players with their sights set on it. I can only do my best and if I can stay focused and play my A game then I stand I chance.”
Winstanley added: “As soon as I heard the news about the ladies qualifier I knew I would enter. You cannot pass on an opportunity like this as you never know what it may lead onto.”
Winstanley also went on to mention the elongated format at the PDC World Championship, she said: “The format is longer in the PDC World Championship and that’s something us ladies have been crying out for for a long time. We are only used to shorter formats but my practice routine with Dean [Her husband and former BDO World Championship finalist] is always longer formats.”
There has been a lot of speculation regarding a possibility for a PDC Ladies’ Tour following the amount of entries for the two qualifiers, Winstanley stated: “I really don’t know whether this will be a ‘one hit wonder’ or if there is a possibility of a ladies tour so I can only urge all the ladies out there to support, it’s free entry so there’s nothing to lose. And we don’t know unless we try. I’d love to see a ladies tour come from this.”
Winstanley isn’t the only talented darter in her household with her well-known husband Dean having made the final of the BDO World Championship and World Masters, but her daughter Josie Patterson has also been playing her trade on the Development Tour throughout the duration of this year.
Winstanley said, when asked how far her daughter can go in the game, “Josie has played the Development Tour for some time now along side some of the BDO Tour players and is now representing England’s Youth and it’s been great for her to gain such experience at such a young age. She will go as far as she wants to with it. She certainly has the talent to go all the way but it’s whether she wants to dedicate to it. Your only young once so of course she has my full support in whatever she does…always.”
Finally, we asked if following in Lisa Ashton’s footsteps and participating in the PDC Challenge Tour events would be something on the horizon for Winstanley: “I would have liked to have played the PDC Challenge Tour but circumstances haven’t allowed it up to now. The BDO Tour is pretty full on and with county and England commitments I don’t get many free weekends so I just couldn’t fit it in. But I will definitely give it a go at some point.”
It will be extremely tough day for whoever comes through Sunday’s qualifier and joins Anastasia Dobromyslova as the ladies’ representatives at Alexandra Palace in December. We wish Lorraine Winstanley and all the other 152 participants the best of luck at Stadium MK.
Lorraine WinstanleyWilliam Hill World Darts Championship