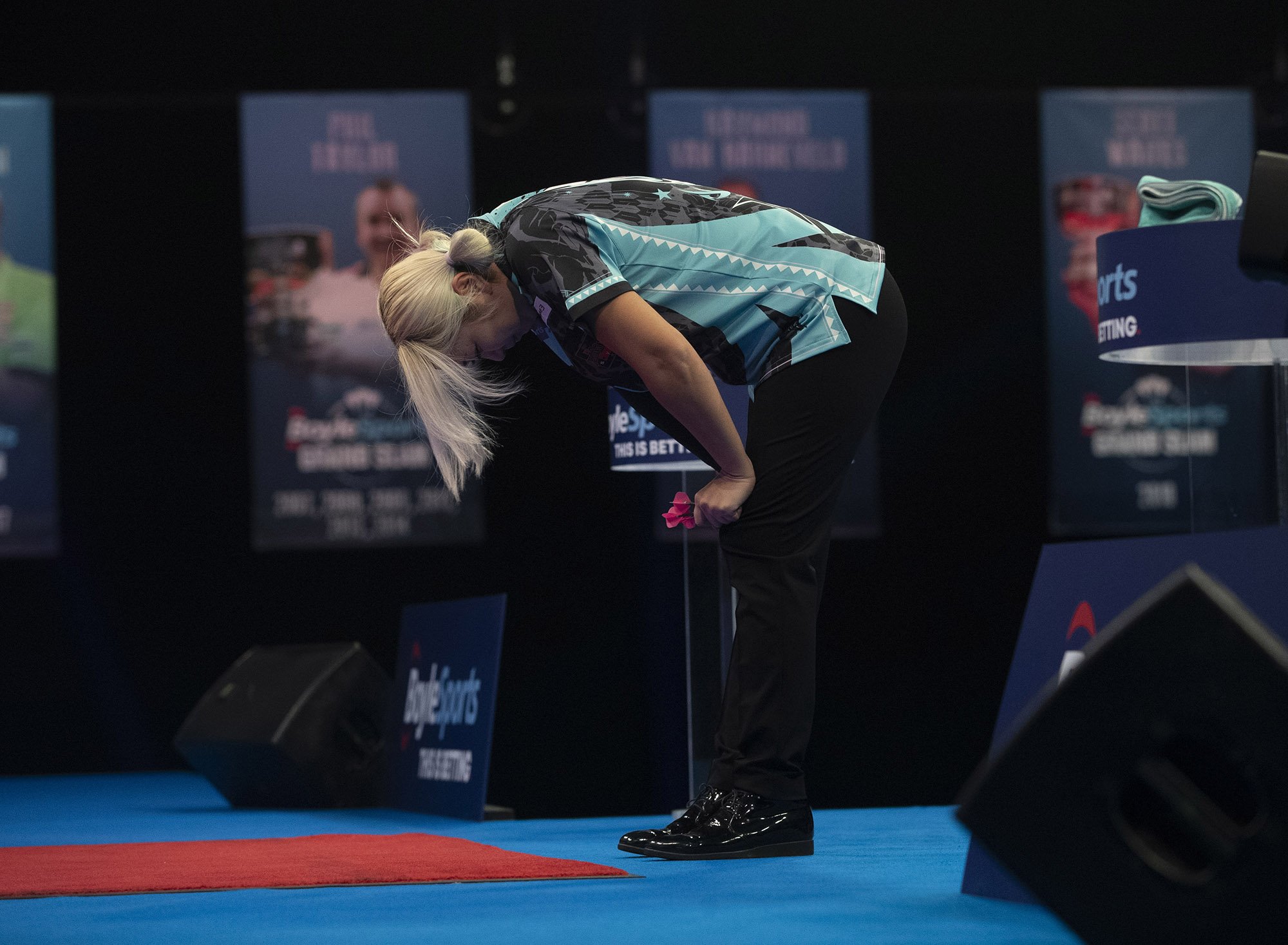 Following the achievements of Fallon Sherrock and Lisa Ashton in recent times, another monumental moment in women’s darts almost transpired as Japan’s Suzuki was millimetres away from overcoming the world number three.

It was an extremely scrappy start to a fascinating encounter, with neither of the two managing a 15-darter or less as the opening four legs were shared equally.

A mesmerising 135 checkout on the bullseye was soon pinned by Suzuki as she gained the ascendancy, though, Price overturned the deficit to move on the brink of victory with legs of 13 and 15 darts.

Nevertheless, despite Price firing home his second maximum in the eighth leg, Suzuki’s hopes remained firmly intact as the Japanese sensation converted another ton-plus outshot to force an unexpected decider.

Suzuki was throwing first in the final leg and she was expertly using that in her advantage, only to squander four attempts at doubles tops and tens to gift a relieved reigning champion Price a narrow win.

It was another heartbreaking occasion for Suzuki following her slender loss to James Richardson at December’s World Championship, and the Takamatsu-based ace now faces Ryan Joyce.

Aside from the opening leg of the match, Van Duijvenbode held the lead throughout, but the Dutchman needed nine darts at double in a deciding leg to eventually close out a 5-4 victory.

Michael van Gerwen showed glimpses of a return to form as the world number one recorded an impressive 105.85 average and five out of nine on the doubles in a whitewash win over debutant Adam Hunt.

Clemens’ victory over Cullen was a battle littered with ton-plus checkouts, with the latter landing a 124 on the bullseye in the opening leg, before the German executed finishes of 122 and 112 later in the tie.

Dimitri Van den Bergh stole the show in the afternoon session as the reigning World Matchplay champion recorded a Grand Slam record average of 114.85 in his thrashing of Ricky Evans.

The Belgian wired double 12 for his second televised nine-darter, and completed all five of his winning legs in 15 darts or less during an accomplished performance.

Reigning Gibraltar Darts Trophy champion Ratajski constructed leads of 2-0 and 3-1, but a seemingly unsettled De Sousa remained in contention, forcing a deciding leg with combination finishes of 64, 81, 90 and 102.

A flurry of maximums arrived in the culminating stages of a closely contested affair, with two treble-less scores from Poland’s Ratajski proving decisive as the European Darts Grand Prix winner completed a 13-darter to prevail.

It was an afternoon to forget for Glen Durrant as the newly-crowned Premier League champion averaged just 78.96 in a heavy 5-1 defeat against Dutchman Jermaine Wattimena.

The Grand Slam of Darts continues on Tuesday afternoon with the second round of group matches taking place at the Ricoh Arena in Coventry.