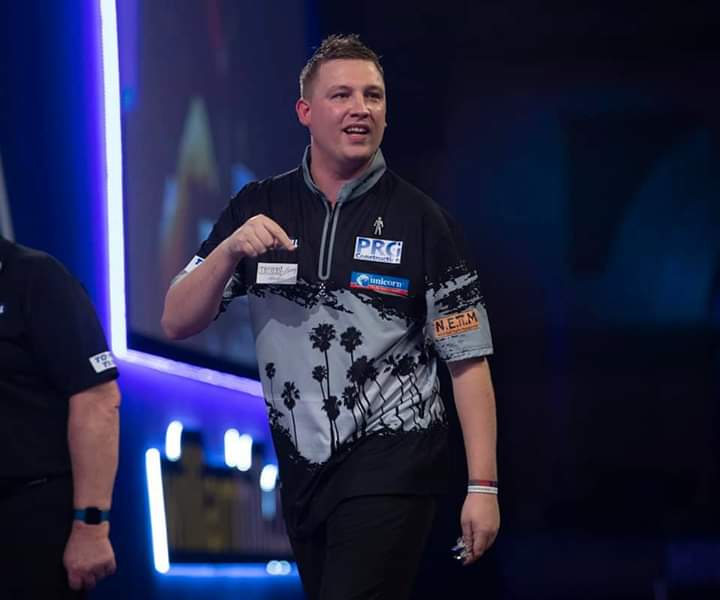 Many onlookers have been anticipating the North East derby between Newcastle and Middlesborough for sometime now, ever since ‘Duzza’ mentioned it post-match against Damon Heta, in fact.

Gerwyn Price and Adrian Lewis are also in action on Saturday at the arrows, with the coverage commencing come 12.30pm on the famous north London stage.

Darius Labanauskas and the Alexandra Palace are emerging as a rather dangerous duo. Raymond van Barneveld and Ian White have both been ousted by the Lithuanian in the last two years.

The 43-year-old, who reached the 2017 BDO World Championship quarter-finals, has denied Matthew Edgar, White and German number one Max Hopp during a sensational showing.

He became the first Lithuanian to qualify for the World Darts Championship last December, and he’ll be looking to become the first from his country to make an Alexandra Palace quarter-finals, though, former world champion Steve Beaton stands in his way.

Labanauskas didn’t even own a PDC tour card this time last year, but after winning through at Qualifying School, he’s already broken into the world’s top 64 and reached a ProTour final, seeing off Beaton en route.

The pair’s other encounter was contested behind closed doors on the ProTour, with Labanauskas reigning victorious once again. However, both matches played between the two have gone to the distance, with the Lithuanian remaining resolute in the deciding leg.

‘The Bronzed Adonis’ stated post-third round that all of his fond World Championship memories existed in his BDO days, and whilst the World Championship has alluded him since joining the professional ranks, Beaton still has time to change that.

The 55-year-old defeated Kyle Anderson at his first hurdle, before dumping out James Wade in the third round.

An unseeded player is confirmed to be in the quarter-finals as World Youth champion Luke Humphries and Belgium’s Kim Huybrechts lock horns.

Humphries is seemingly coming of age once again at the World Darts Championship, after embarking on a landmark run to the quarter-finals 12 months ago.

Cool Hand has surprisingly never met Huybrechts in a professional match, though, if both are on form a thriller could emerge upon the Alexandra Palace stage.

Huybrechts’ resurgence has been there for all to see thus far in this World Championship, with former champion of the world Rob Cross being whitewashed and Dutch duo, Danny Noppert and Geert Nentjes, being ousted.

The Belgian reached the quarter-finals in north London eight years ago during a watershed moment, and that word ‘watershed’ could come into existence once again if he were to beat Humphries and relaunch his career.

What a thrilling clash between two titans of the sport we have to conclude Saturday afternoon session!

Adrian Lewis has shown character of old in battling back from two sets down against both Cristo Reyes and Darren Webster – the latter being an exceptional affair, and one of the best we’ve witnessed at this year’s spectacle.

Lewis pinned checkouts of 124 and 132 – utilising two bullseyes – against Webster, after having wired double 12 for a nine-darted against his Spanish second round opponent.

As for van den Bergh, he produced a blistering display in obliterating Josh Payne in the second round, averaging 103, before pinning four ton-plus checkouts in a round three victory over a visibly under the weather Luke Woodhouse.

Van den Bergh has twice beaten Adrian Lewis, including the pair’s only staged meeting which came at the European Darts Open this year. Lewis has won the last two between them, with both coming on the ProTour in Barnsley.

If Jeffrey de Zwaan continues to perform at the levels he produced against Dave Chsinall, beware all. The Dutchman pinned a miraculous 106 average and 38 140-plus scores during a narrow 4-3 victory.

Despite producing a performance nigh on his best against Chisnall, de Zwaan somehow survived a scare from America’s Darin Young in the second round, with Young having abruptly ended Raymond van Barneveld’s career a round prior.

As for his opponent, Peter Wright, we’re yet to witness him anywhere near his best.

If it wasn’t for a skin-saving 140 checkout in the second round against Noel Malicdem of the Philippines, we would have been looking at an Asian ace in the fourth round.

However, the world number seven did somehow overcome Malicdem and then his Asian Tour colleague Seigo Asada to book his place in the last 16 for the first time in three years.

Wright and de Zwaan have met thrice, with de Zwaan winning the last two, including a 6-4 win in the European Championship first round.

Glen Durrant was one of the very few in attendance at Alexandra Palace willing for Chris Dobey to beat Fallon Sherrock, but he received his wish and now an all-north east last 16 match takes place.

In the footballing world, Middlesbrough haven’t clashed with their arch-rivals Newcastle for almost a decade, although, they will in this year’s World Darts Championship.

Dobey was deemed as the unsavoury character that brought down the curtain on the unprecedented run of Fallon Sherrock, but, although he was seemingly under the cosh early on thanks to the finishing of the Queen of the Palace, he claimed nine of the remaining 10 legs to prevail.

‘Hollywood’ averaged over 101, whilst having the crowd firmly against him, as he faced Sherrock, and if both he and Durrant click into gear, we could witness a more fireworks than a Bonfire Night display at Alexandra Palace.

The Middlesborough man has thus far been nowhere near his peak, though, his finishing has proved costly, with ‘Duzza’ comparing himself to a certain James Wade following his third round victory over Daryl Gurney.

Dobey has lost out in both of the pair’s previous meetings, with Durrant’s victories including one at the Gibraltar Darts Trophy.

After his well below-par first hurdle performance in edging out William O’Connor, many onlookers began his write off Gerwyn Price.

However, whilst somewhat returning to his clinical ways in the third round, Price tenaciously reestablished himself as a potential contender to lift the Sid Waddell Trophy on Wednesday evening.

‘The Iceman’ pinned a 104 average in brushing aside John Henderson, with the Scotsman averaging over the 100 mark himself for the most part of their third round clash.

Price defeated Whitlock in the quarter-finals en route to lifting his maiden major crown at last year’s Grand Slam of Darts, as well as defeating the Aussie in the final of the International Darts Open that same year.

‘The Wizard’ has beaten Price seven times, out of 14 attempts, with the most significant of those victories coming in the Grand Slam of Darts, the Premier League and the inaugural Czech Darts Open in June.

Despite averaging sub-95, Whitlock has breezed into the fourth round, dropping just one set in thrashing both Harry Ward and Mervyn King.