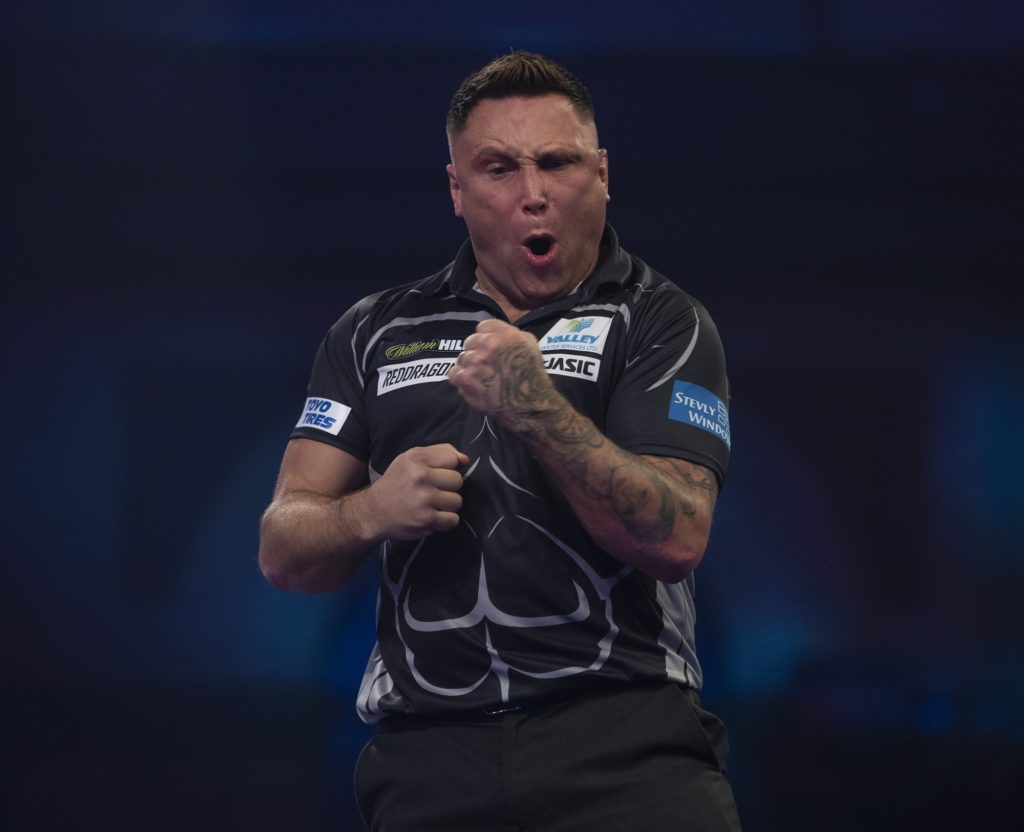 Michael van Gerwen and Gerwyn Price remain the outright contenders as a dream final between the two looms ever-closer, while Nathan Aspinall and Lithuania’s Darius Labanauskas are amongst six looking to deny the world’s two elite darters.

The quarter-final coverage gets underway in north London at 12.30pm with only four being eligible to progress and move within two victories of a potentially life-changing feat.

Nathan Aspinall hits 11 180s on his way to a 4-2 victory over Gary Anderson and he reaches the Quarter-Finals for a second consecutive year!

When Dimitri Van den Bergh reached his first World Darts Championship quarter-final two years ago, he was left disappointed after squandering an opportunity against the eventual champion, Rob Cross.

Van den Bergh fell three sets behind in that match, though, levelled up proceedings at four-a-piece, only to falter in the final set.

Cross was one of the firm favourites to lift the crown that particular year, and the young Belgian faces another player deemed a potential champion in Nathan Aspinall.

After reaching the semi-finals on debut at the Alexandra Palace 12 months ago, Stockport’s Aspinall has blossomed on the oche, lifting both the major UK Open and US Darts Masters within the space of four months.

Aspinall will be looking to end Van den Bergh‘s hopes at the quarter-final stage once again, after having overcame a collection of thrilling affairs with Gary Anderson, Krzysztof Ratajski and America’s Danny Baggish.

The former two-time World Youth champion will have other intentions, having achieved a mixed run of performances thus far in this tournament.

He blew away a valiant Josh Payne in the second round averaging over 104, but since then has lacked consistency – which has forced him to become embroiled in scrappy battles.

The duo have never clashed in front of the television cameras, with Aspinall having won all three of their floor encounters, including the most recent in a tournament that ‘The Asp’ reached the final of.

Peter Wright fights off an incredible comeback from Jeffrey de Zwaan to come out the 4-3 victor!

After – in his own words – nearly passing out on stage during a narrow 4-3 victory over Jeffrey de Zwaan, Wright faces yet another young opposition in World Youth champion Luke Humphries.

Wright pioneered an early 3-0 lead and was cruising to a comfortable triumph against de Zwaan, but eventually prevailed a narrow victor thanks to steam being lost mid-match.

‘Snakebite’ has endured a far from comfortable campaign thus far, having been forced to produce a skin-saving 140 checkout against an inspired Noel Malicdem of the Philippines in the second round, before eventually shaking off a determined Seigo Asada.

As for Humphries, since coming through a closely contested second hurdle clash with Jermaine Wattimena, the 24-year-old has progressed to the last eight with relative ease.

It will be the first meeting between the ProTour qualifier and the world number seven, and one with the potential of being a thriller if both hit the heights we know they are capable of.

? Steve Beaton's dream of reaching his first PDC World Championship quarter-final at his 19th attempt is over.

The Bronzed Adonis is taken out by Lithuania's Darius Labanauskas. pic.twitter.com/4hXBnVP7gq

When the draw was conducted back in November, very few – if anyone – would have selected the Lithuanian Darius Labanauskas to face Michael van Gerwen in the quarter-finals.

‘Lucky D’ has gone about his business in a fine manner and has made short work of anyone that has stood in his way, with Steve Beaton, Ian White and Max Hopp being ousted by Labanauskas since his first round victory over Matthew Edgar.

The Lithuanian, who has solely represented the Baltic region since the early exits of Madars Razma and Marko Kantele, will make his second World Championship quarter-final appearance, after being denied by eventual champion Glen Durrant in the 2017 Lakeside championship.

Labanauskas was beaten by the number one seed on that particular occasion, and will lock horns with the top seed on Sunday evening also.

Van Gerwen is well on course to defending his world crown for the first time, after failing to do so on two previous occasions.

After surviving a scare on the opening night against Jelle Klaasen, ‘Mighty Mike’ has steamrolled all in front of him, whitewashing both Stephen Bunting and Ricky Evans.

The world number one has never met Labanauskas in a professional match, though, what better place for an inaugural meeting than the biggest stage in the sport.

“I don’t fear anyone now, if I bring my A Game”

Gerwyn Price is feeling confident in his ability to go all the way here at Alexandra Palace pic.twitter.com/8eRUInEV9I

Price has materialised into van Gerwen’s closest rival to lift the Sid Waddell Trophy, after having lifted five PDC titles in 2019, including the defence of both his prestigious Grand Slam of Darts crown and the International Darts Open in Germany.

It would be typical of Price to go on and lift the his third major crown on Wednesday evening, despite relying on a miscount from William O’Connor in the first round and battling past Simon Whitlock.

However, ‘The Iceman’, was quite simply breathtaking in a third round whitewashing of Josh Henderson, averaging over 104 and pinning checkouts of 115 and 136 during an immaculate display.

Price is now into his maiden World Championship quarter-final, but will be self-possessed as another tough tussle awaits in three-time BDO world champion Glen Durrant – who he has beaten five times in eight attempts.

What a way to win it as Glen Durrant seals a 4-3 victory over Chris Dobey with an incredible 146 finish! pic.twitter.com/mtu5qgP5Ay

Durrant, who is into his fourth major quarter-final since narrowly winning his PDC tour card in January, defeated Price in the semi-finals of a Players Championship event in February – one in which he lifted his maiden title in the PDC.

The Middlesborough man followed up a commanding straights sets victory over Brisbane Darts Masters champion Damon Heta with a 4-2 success over Daryl Gurney, before coming through an all-North East battle with his good friend Chris Dobey.

In spite of the small matter of competing in a World Championship quarter-final, ‘Duzza’ is looking to seal his Premier League debut, with the lineup being confirmed following the champion being crowned on the first day of the new decade.

Anderson: “I’ll play Premier League, back problems or not”