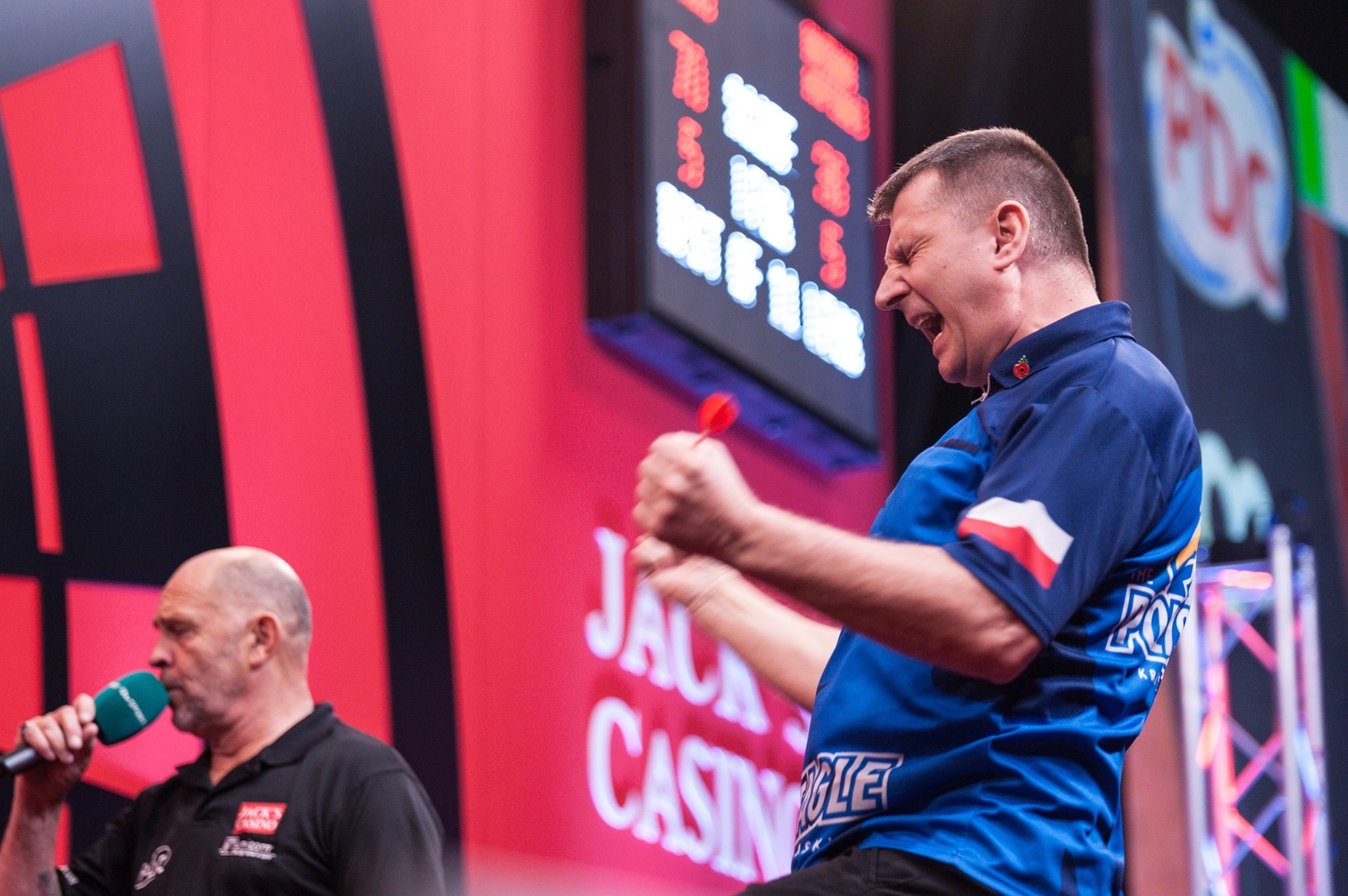 Sherrock will be hoping to emulate or better than of what Mikuru Suzuki produced on Sunday evening in a narrow loss to James Richardson.

The action gets underway from 1pm at Ally Pally, with the television cameras and the millions of viewers around the world being hooked on the biggest tournament in the sport.

Since reaching the fourth round at the Alexandra Palace last time around, Ryan Searle has reached the last 16 on the ProTour just twice.

The Devon man, who made four quarter-finals – including a ProTour final and the World Series Finals last eight – last year alone, has had a nightmare season throughout 2019.

2018 Champion of Champions, Searle, returns to the stage that holds happy memories for himself, after seeing off Stephen Burton, Mensur Suljovic and William O’Connor last year.

As for the relatively unknown Robbie King, he’s claimed two DPA ProTour titles this year in Australia, as well as the prestigious Oceanic Masters – which sealed his place at the tournament.

Prediction: 3-0 Searle – His past experience at Alexandra Palace will hold him in good stead, and despite an uneventful year, Searle breezes through to round two.

Asia’s number one takes on Spain’s number one. Lourence Ilagan is most definitely a force to be reckoned with at Alexandra Palace as he quite clearly provided evidence for 12 months ago.

Despite enduring defeat against a plucky Vincent van der Voort, Ilagan was spectacular on the oche, as he’s been throughout the duration of this year on the PDC Asian Tour.

The Filipino has lifted seven Asian Tour titles since its introduction at the frontend of last year, including three titles this year in Taiwan and his home country.

Tenerife’s Reyes has been seemingly decent this year without tearing up trees. During the middle part of the season, the Spaniard reached back-to-back quarter-finals.

He’s produced glimpses of the form he found a few years ago recently.

Prediction: 3-2 Ilagan – Ilagan has been absolutely sensational this year on the PDC Asian Tour, having thrown a nine-darter. Reyes has been slightly inconsistent.

The Filipino talent continues to be on the offing on Tuesday afternoon, with Filipino number two Noel Malicdem, facing Rowby-John Rodriguez.

Rodriguez’s Alexandra Palace record doesn’t make for good reading. The Austrian has won just once at the World Championship, with this year being his fifth appearance.

That solitary victory came against Ricky Evans last year, before narrowly losing out to Cristo Reyes.

Rodriguez hasn’t had the greatest year, reaching the last 16 four times ProTour, including a run to the quarter-finals at the Austrian Darts Championship.

As for Malicdem, since toppling Jeffrey de Graaf at last year’s tournament on debut, he’s continued to be unearthed via the PDC Asian Tour, adding to his two 2018 titles with a victory over Taiwan’s Teng Lieh Pupo in the Philippines final.

Prediction: 3-2 Rodriguez – Malicdem has been arguably the most consistent player on the PDC Asian Tour this year, though, Rodriguez snatches the victory here.

Poland’s Krzysztof Ratajski must have thought he would be involved in a second round thriller with Jamie Hughes on Tuesday afternoon, though, Zoran Lerchbacher certainly had something to say about that.

Ratajski is without a shadow of doubt the most underrated player in this tournament. He’s averaged 96.62 throughout the entirety of this year on the Players Championship series, with only seven players having topped that.

‘The Polish Eagle’ has lifted a title on the stage also, defeating Dave Chisnall in the Gibraltar Darts Trophy final. Ratajski averaged over 109 in his semi-final victory over Daryl Gurney, and over 102 against Chisnall in the final.

Aside from his success in Gibraltar, the 42-year-old has reached four ProTour finals, winning two of them, with his World Championship appearance 12 months ago being cut short at the hands of James Wilson.

As for Lerchbacher, he’s undergone a disappointing season, though, did see off Jamie Hughes in the opening round.

‘The Hypercane’, a two-time finalist on the PDC ProTour, will have the odds stacked up against him as he did so against the Czech Darts Open champion, Hughes, on Saturday evening.

Lerchbacher has met Ratajski twice within the PDC, with the Pole coming out victorious in both.

Prediction: 3-1 Ratajski – I fancy Ratajski to have a run not just in this match but in the entire tournament. With the exit of Smith, the draw has marginally opened up for the Pole, and he’ll comfortably defeat Lerchbacher.

Known for his ability to pile in the big scores, Boris Koltsov has been impressive on the PDC Challenge Tour this year, and in a frustrating month for Russian sport, he’ll be hoping to add a little optimism at Alexandra Palace.

Having won one event and reached the final of another on the Challenge Tour this year, Koltsov has produced some scintillating stuff on the secondary PDC tour, though, it was after winning the EADC ProTour that sealed his Alexandra Palace berth.

His fellow Challenge Tour partaker, Ritchie Edhouse, will be looking to make amends after missing out on Alexandra Palace last year – which resulted in him losing his PDC tour card.

Edhouse will be heading to Wigan in January, in hope of a return to the ProTour, however the biggest tournament in the sport comes prior.

Prediction: 3-1 Koltsov – Edhouse has looked exceptional in patches this year, though, the plucky Russian will come through.

When making his second Alexandra Palace last year, Jose de Sousa was relatively unknown yet produced glimpses of excellence. Now, near enough a year on, Portugal’s de Sousa is a PDC tour card holder and a two-time PDC title winner.

The Portuguese ace has set the ProTour alight this year, producing averages well into the hundreds and adding his unique style of play to the professional scene.

Gerwyn Price and Glen Durrant have been ousted in PDC finals from the Madrid-based thrower, and he’ll be looking to win his first World Championship match in facing Damon Heta.

Heta himself has lifted a PDC title this year in Brisbane, during the PDC’s annual trip down under. ‘The Heat’ denied former champion of the world Rob Cross in the Brisbane Darts Masters final.

Heta averaged over the 100 mark in beating Steve Fitzpatrick to lift his first DPA ProTour crown this year – which was one of of his seven titles in the midst of a sensational season.

Prediction: 3-1 De Sousa – He’s played at Alexandra Palace twice before, so he’s already got one over on Heta. His experience on the professional scene should hand de Sousa in good stead also.

Sherrock was the last qualifier for this tournament after winning the UK and Ireland Women’s Qualifier in Wigan, and performed superbly well, averaging 99.1 in defeating Lisa Brosnan, before averaging over 91 in denying Lisa Ashton.

The 25-year-old, who is the women’s number two, hit a rich vein of form during the summer of last year. When she’s in the mood, she’s a match for any opposition.

She lifted six straight BDO ranking titles in the middle of last year, as well as the major World Trophy, and could prove a tricky tussle for Ted Evetts.

Evetts himself knows how to get over the winning line. He’s lifted eight PDC Development Tour titles this year alone, after topping that particular series by a significant distance.

The 22-year-old also reached the quarter-finals on the European Darts Grand Prix in what has been a breakthrough year for him on the both the development and professional scenes.

Prediction: 3-0 Evetts – As much as I’d like to say Sherrock will become the first women to win at the William Hill World Darts Championship, Evetts will be simply too much for the 25-year-old.

Raymond van Barneveld’s career came to an abrupt close on Saturday evening. It was the American Darin Young that handed the Dutchman a major blow in his final professional tournament.

Young has lifted three CDC crowns this year on his way to topping the CDC Main Tour, and qualifying for his first World Championship since 2016.

As for Jeffrey de Zwaan, he wouldn’t have been a popular man if van Barneveld would have beaten Young, though, roles could be reserved with the American producing a villainous win over the weekend.

After reaching the semi-finals of the World Matchplay almost 18 months ago, many envisaged the Dutchman to kick on, however, that hasn’t been the exact case.

‘The Black Cobra’ has made five quarter-finals on the ProTour this year, reaching two finals, winning one of them in Barnsley – where he thrashed Stephen Bunting to win his second senior PDC title.

Prediction: 3-0 De Zwaan – Young’s doubling eventually proved decisive against van Barneveld, while his scoring wasn’t up to scratch. If that’s the case in this meeting with de Zwaan, it could be very bleak for ‘Big Daddy’.