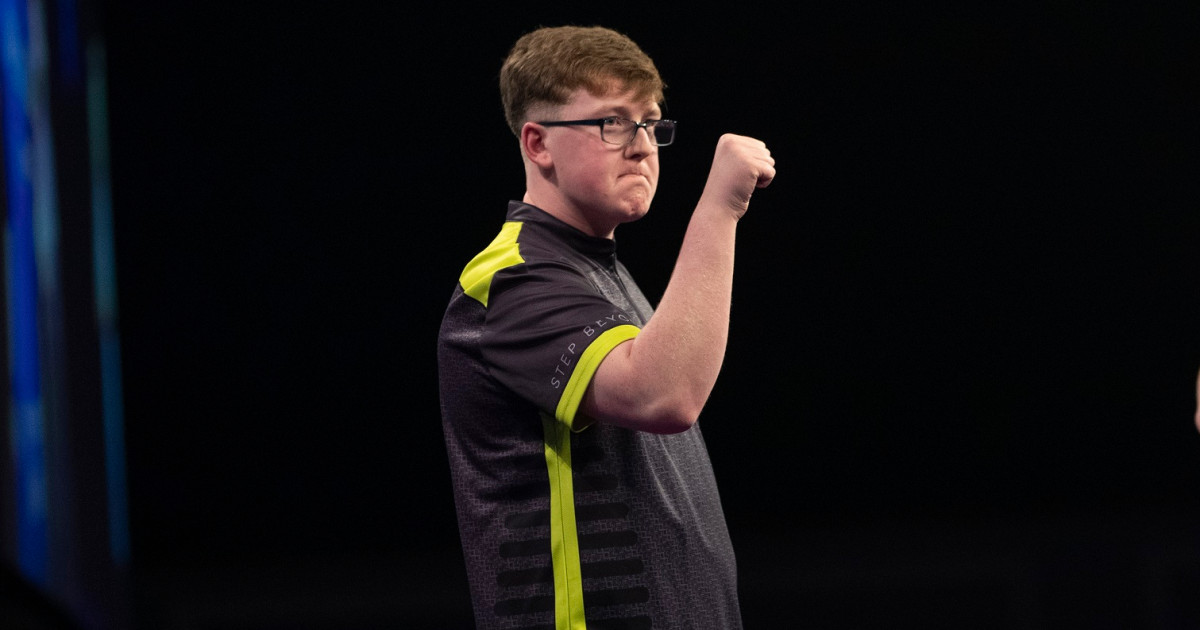 White was ousted by courageous Lithuanian Darius Labanauskas, while Smith’s fond World Championship memories were scuppered by Luke Woodhouse on a day of super Sunday shocks.

Two-time world champion Gary Anderson enters the fray on Monday evening as he takes on Brendan Dolan in a battle for the ages, while 17-year-old Keane Barry – the third youngest Ally Pally participant – takes to the stage.

The coverage gets underway from 7pm, with the television cameras and the millions of viewers around the world being hooked on the biggest tournament in the sport.

Having claimed titles on both the Challenge Tour and Development Tour this year, Callan Rydz has been tipped by many to have a big future in the sport. The Newcastle man is a back-to-back World Youth Championship quarter-finalist at the age of 21.

A landmark run at Players Championship 18 in Wigan announcement his quality to the world, in a run which saw him average over the 100 mark twice in defeating Brendan Dolan, Chris Dobey, Steve Beaton and Stephen Burton, before losing out to eventual champion, James Wade.

His opponent, Steve Lennon, is one of four either Irish or Northern Irishman to be partaking on Irish night at Ally Pally.

After winning his PDC tour card in 2017, 2018 was the breakthrough year for Lennon as he qualified for the World Matchplay and World Grand Prix, as well as reaching the final of the Dutch Darts Masters.

Just two quarter-finals have came for the Irishmen this year in what has been rather disappointing after his success last time around. His run to the final of the World Cup of Darts with William O’Connor has been an obvious highlight.

Prediction: 3-2 Rydz – Lennon is playing his worst stuff since joining the professional ranks, while Rydz is performing well. It could turn into a bit of a scrap with the 21-year-old making his debut, however.

Marko Kantele was made to wait nine years between his Alexandra Palace debut and his second appearance, though, that was not the case this time around.

The Finnish thrower will have to thank Darius Labanauskas, who defeated Ian White on Sunday afternoon, for his third World Championship appearance, after finishing third on the PDC Nordic and Baltic tour.

Kantele has reached the last 16 twice on the PDC ProTour this year, as well as winning one title on the PDC Nordic and Baltic tour, whilst losing in the final of another event.

As for O’Connor, he joined Steve Lennon in getting Ireland to the World Cup of Darts final in June, and will face Kantele for the first time.

A recent Players Championship Finals quarter-finals in which he defeated the likes of Krzysztof Ratajski and Gabriel Clemens, before losing to Ian White, O’Connor has also reached two quarter-finals on the PDC ProTour in the last year or so.

‘The Magpie’ was spiralled into the headlines when lifting his maiden PDC title in April, beating Nathan Aspinall in the final. He averaged 98.6 in the final, having beaten Steve Beaton with a 105.8 and Daryl Gurney with a 102.2 earlier in the event.

Limerick’s O’Connor had prior to reigning victorious in Barnsley made the final of the European Darts Matchplay in Germany, in which he lost out to the best player on planet darts, Michael van Gerwen.

Prediction: 3-1 O’Connor – The Irishman is in a rich vein of form after reaching his first major quarter-final in Minehead. He’ll be simply too much for a plucky Fin.

He’s not old enough to buy a pint from the Alexandra Palace bar, though, Keane Barry is amongst the 96 hoping to lift the Sid Waddell Trophy and the cheque for £500,000 come New Year’s Day.

Barry lifted the prestigious Tom Kirby Irish Matchplay to earn qualification, and will become the third youngest player to ever grace the north London stage, with only Max Hopp and Australia’s Mitchell Clegg being younger.

‘Dynamite’ has reached the JDC Junior World Championship final and will face Adam Gawlas on December 21, as well as the PDC World Youth semi-final and the BDO World Youth final – which will be contested with Leighton Bennett in January at the O2 Arena.

The 17-year-old has lifted a senior BDO title in Northern Ireland recently, with Vincent van der Voort being his opponent in what could be quickest match in World Championship history.

Van der Voort, who will be making his 12th World Championship appearance, needs no introduction, he’s arguably the third best Dutch darter of all time, and amid consistent back injuries, he’s remained a constant threat on the professional circuit.

The ‘Dutch Destroyer’ has reached six quarter-finals this year, including runs at the European Championship, Austrian Darts Championship and Dutch Darts Masters in front of a home audience.

Prediction: 3-1 Van der Voort – The occasion will almost certainly not get to the prodigiously-talented Irishman, though, van der Voort has provided the goods in recent years at the World Championship and that record continues.

Since embarking on a run to the semi-final 12 months ago, Gary Anderson’s form has slipped through the cover of a manhole.

An injury-struck start to the year led to him withdrawing from the Premier League, and departing at his first hurdle at the UK Open in March.

Anderson has won just 16 matches in the 10 ProTour events he’s played this year, with his World Cup of Darts triumph with Scotland alongside Peter Wright being the only promising occasion for Anderson this season.

‘The Flying Scotsman’ was ousted by Gerwyn Price in the Grand Slam of Darts last eight, and, despite showing glimpses of his best game, was far from his brilliant best.

As for Dolan, his resurgence has been there for all to see this year. Two PDC ProTour titles and performances that we saw from the Northern Irishman when he was at the very top of the sport.

Dolan ended a five-year title drought in Germany earlier this year, in which he defeated the likes of Jeffrey de Zwaan, Dave Chisnall, Chris Dobey and Glen Durrant on his way to supremacy.

He breezed into the second round on Sunday, thrashing a much improved Nitin Kumar of India 3-0 in a shock-riddled Sunday at the Palace.

Anderson and Dolan have met 16 times on the professional scene, with eight wins going either way, though, this will be their first meeting since 2017. ‘The Flying Scotsman’ has won five of the pair’s seven on stage encounters, including a 4-1 victory at the 2013 World Championship

Prediction: 3-2 Dolan – Gary Anderson will be next to Dolanised and added to the growing list of shock second round exits. He’s looked below-par all year, and Dolan has been seemingly composed and clinical.