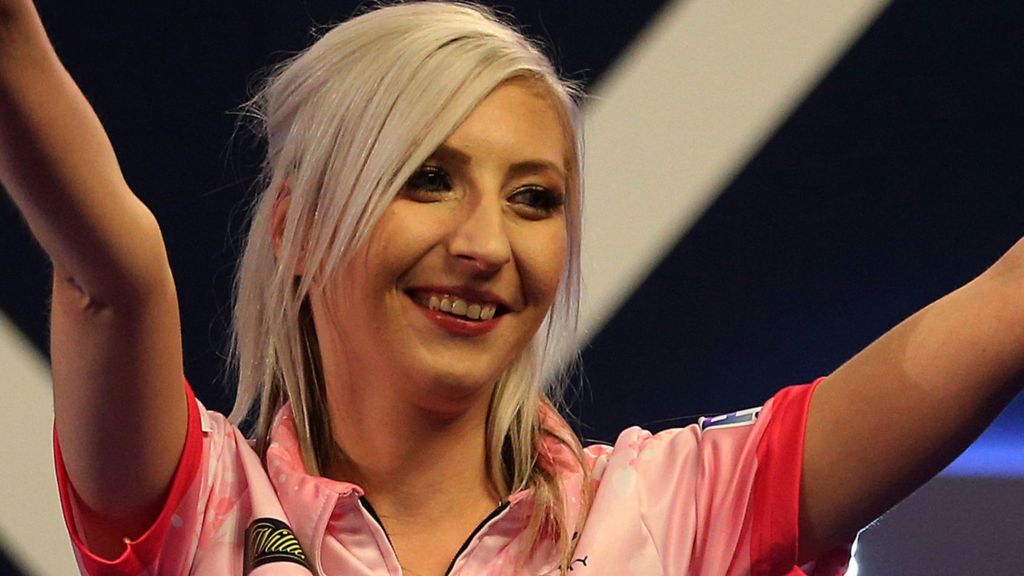 Fallon Sherrock will be looking to continue her World Championship legacy when she takes on Mensur Suljovic on Saturday Night at Alexandra Palace, as the biggest tournament in Darts begins to hot up.

Sherrock beat Ted Evetts on Tuesday Night, a win which has seen the sport into the International spotlight.

Next up in her way is Austrian Mensur Suljovic, who is looking to end a disappointing 2019 on a high.

But, apart from the Saturday night main event, here’s what else is happening on second Saturday at the arrows.

Keegan Brown is showing signs of the player which saw him win the World Youth Championship in 2014 and touted as a future World Champion.

Seeded 26 in the tournament, Brown has qualified for most of this year’s TV majors, although success in these have been few and far between.

Asada has already played in this years tournament and came through easily, breaking past Micky Mansell 3-0 in Round 1, averaging in excess of 90 in the progress.

Known as a tricky customer, he is one of the International qualifiers that many players in the draw look to avoid.

Prediction – 3-2 Brown. This game looks as if it is going to go deep. Asada is such a difficult player to dispose of, and has the power to match the Needle dart for dart, but I just think Brown’s big stage experience will see him squeeze through a tricky test.

The 2010 finalist will be looking to go one better a decade on.

The Hampshire based Aussie has had a quiet year by his high standards, but will be looking to knock back on the Premier League door with a run in this year’s Worlds.

Still ranked in the top 16, he is still the beard to be feared.

Harry Ward, the 2015 BDO World Youth runner-up, made his debut in the senior version on Wednesday, where he beat Madars Razma in a tense affair 3-2.

Ward will know that he will need to improve on his 84 average to help his chances of a place in the last 32.

One bit of comfort he will have ahead of the meeting is a head to head record of 1-1 in career meetings.

Prediction – 3-1 Whitlock. I just think Simon will be too strong for Harry in this one. He did well to get past Madars Razma in Round 1, but Whitlock you sense will punish missed doubles.

Ryan Searle made the last 16 last time out at the World Championships, beating the likes of Mensur Suljovic to make it to that stage.

Searle had to come through a bruising first round clash with Australian Robbie King, prevailing 3-2 in a seesaw game to keep the hopes of another World Championship run alive.

Steve West comes into the tournament as the number 28 and is touted as a 4/5 favourite to advance to the last 32 of the tournament.

West has qualified for only two of the TV majors in 2019, those being the Players Championship Finals and the UK Open following a wretched year on tour.

Prediction – Searle 3-1. I think out of the two players it is Ryan that is on the up. Steve hasn’t shown the quality in 2019 as often as we know he can, and I just think Searle will have the upper hand in this contest.

Adrian Lewis looks as if he is getting things right after two years to forget on tour.

Qualifying for the Grand Slam of Darts last month seems to have bought a new lease of confidence in Jackpot.

And the two time World Champion will be looking at this tournament to continue his recent resurgence and to try and cement himself back amongst the games elite.

Cristo Reyes will prove to be a difficult customer for the Potter. Reaching the last 16 of the UK Open back in March, it was as good as the Spaniard’s season got.

However, the World Championship seems to be a favoured stage for the Spartan. On debut, he made his way through the then Preliminary Round all the way through to the last 16.

Reyes made it to this stage after being Laurence Ilgan 3-2 in Round 1.

Prediction – 3-0 Lewis. There seems to be signs that Adrian Lewis is getting back to his best, and if that’s the case the field best look out. Reyes has been out of sorts recently, and the form lines look as if there’s going to be only one victor.

The number 6 seed will be hoping to stop the rot where it comes to the scattering of seeds in this years tournament.

If Superchin wasn’t to win the World Championship, it would be the first time in three seasons that he hasn’t won a TV major, having won the 2017 World Grand Prix, and 2018 Players Championship finals.

Justin Pipe came from behind to beat Benjamin Pratnemer in Round 1, 3-2.

The Force is hoping to put the cough gate incident behind him and hopes that the crowd give him a fair crack of the whip come Saturday Night.

Prediction – Gurney 3-0. I think Superchin will have too much for Pipe in this one, the scoring power and finishing stats just point all in his favour.

What a game this looks on paper.

Glen Durrant, unbeaten in a World Championship match since losing to Scott Waites in the 2016 BDO World Quarter finals, is looking to become the sports first ever unified champion of the World.

Having beaten Waites at Lakeside in January, he moved to the PDC as reigning three-time BDO World Champion.

Following a strong first year on the circuit, he’s looking to continue his mesmeric rise amongst the PDC ranks.

Damon Heta has had a breakthrough year in his homeland and is looking to make a crest of the wave on UK shores.

Winner of the Brisbane Darts Masters in the summer, the Heat is looking to outlast Duzza and pull off another upset in this years tournament.

Prediction – 3-1 Durrant. This is going to be a cracker, possibly game of the night. But, Duzza really is the real deal and I think he’s the type that will use this tournament to prove to us just that.

The game everyone is looking forward to.

Fallon Sherrock’s win over Ted Evetts on Tuesday Night shunned the sport into the type of spotlight it has never seen before.

Wednesday became a media frenzy for the 25-year-old, with Good Morning Britain, Victoria Derbyshire, Channel 4 News among many others queuing up for an interview, so much so a secondary press conference was called.

Billie Jean King was among those to congratulate Sherrock on the feat.

Back to the matter in hand, her opponent Suljovic is always a dangerous opponent, even if his 2019 hasn’t gone to plan.

The World Championships have not been a happy hunting ground for Mensur with the last 16 his best performance at Alexandra Palace.

Prediction – 3-2 Mensur. I think Fallon will put up a good fight, but I think Mensur will squeeze through. What Sherrock proved in that game is not just the ability to win but to average around the high 90’s for the most part of that match. If she continues doing that Mensur has problems.

Fallon Sherrock has become the first woman to win a match at the PDC World Championship.

Just look at these scenes, a history making moment for darts. pic.twitter.com/zqoOeyQLmt

Dancing Dimitri burst onto the scene in the Senior ranks two years ago when he made the Quarter finals of the competition and came close to beating Rob Cross in the last set before Voltage went on to become World Champion.

Van den Bergh hasn’t had the best of years, and comes into this tournament ranked 29 in the PDC order of merit.

Josh Payne accounted for Diogo Portela in the first round with a comfortable 3-0 win with an impressive 96 average.

The winner faces Luke Woodhouse in the last 32 after knocking out Michael Smith in Round 2.

Prediction – Dimitri 3-2. Another tight one here on paper. If Payne plays like he did in his opener he will be hard to beat, but van den Bergh likes the big stage and plays his best on the big occasion, and that record I think will see him through to the last 32.