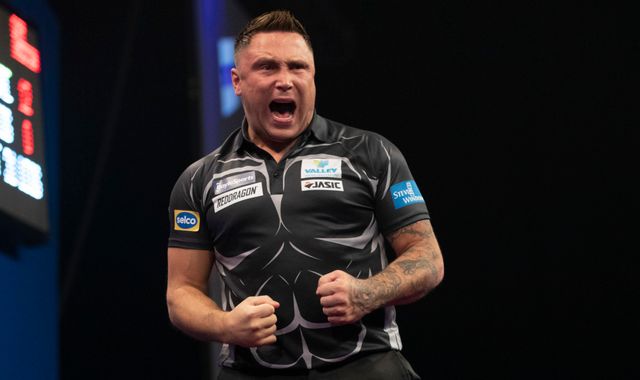 As the first round draws to an eventful close, it has already been a tournament to remember. History has been created by Fallon Sherrock, with seeds dropping like flies.

Thursday’s action gets underway from 1pm at Ally Pally, with the television cameras and the millions of viewers around the world being hooked on the biggest tournament in the sport.

Following the infamous ‘coughgate’ incident two years ago at the World Darts Championship, Justin Pipe has experienced both highs and lows. The sad passing of his father was undoubtedly the lowest of those lows.

Since his family bereavement, Pipe’s form has undergone a resurgence. ‘The Force’ has reached five PDC ProTour quarter-finals this year, including a run to a final in Barnsley, losing to Peter Wright.

Despite not having matched the heights he’s hit on the floor compared to the stage, Pipe will be one to look out for in London.

His first round opponent, Benjamin Pratnemer, will be unknown to many frequent viewers of the arrows. The Maribor-based thrower came through the Eastern European Qualifier, becoming the second Slovenian to feature at the World Championship.

Pratnemer has gained some valuable experience on the BDO circuit this year, reaching the latter staged rounds of the prestigious World Masters, as well as making the quarter-finals of the Hungarian Classic and Italian Grand Masters.

It was November of last year when Pratnemer achieved a career-best feat, doing the Hungarian double, winning both the BDO-ranked Classic and Open.

Prediction: 3-1 Pipe – Pratnemer will hold his own at Alexandra Palace, though, Pipe has been outstanding this year and is the seasoned professional.

So happy for Ryan Joyce. What a story! Used to pack women's clothes Matalan, joined the PDC Tour this year, qualifies for his debut World Championship, 1000/1 at the start and now knocks James Wade out to reach the quarter-finals! pic.twitter.com/HiThkaCvZB

Since somewhat surprisingly embarking on a debut run to the quarter-finals 12 months ago at Ally Pally, Ryan Joyce has struggled to kick on.

The 34-year-old, who defeated both Simon Whitlock and James Wade during last year’s tournament, has reached three quarter-finals on the PDC ProTour this year.

As for Dekker, he has endured a real struggle at the World Championship in recent years, winning just twice in three appearances, despite having reached the semi-finals at Lakeside during his BDO days.

Dekker played the villain last time around as he came from 1-0 down to see off an inspired Lisa Ashton, while his opponent Joyce defeated the other female qualifier Anastasia Dobromyslova.

Two quarter-finals on the circuit this year have been a stand-out in a relatively poor year for the Dutchman – whose only major appearance this year was brief, exiting early at the UK Open in Minehead.

Mikuru Suzuki was two darts from creating history as the first woman to win a PDC World Championship game… but James Richardson comes through in a sudden death leg!#Darts #WHDarts #ItsTheWorlds

After overcoming both Mikuru Suzuki and the Alexandra Palace audience on Sunday evening, James Richardson returns to the stage, facing John Henderson.

‘Ruthless’ has reached the last 16 stage of a PDC ProTour event just once this year, but still managed to find his name among the 32 qualifiers ahead of the tournament.

The 45-year-old is making his first appearance in north London for two years, when he thrashed both Kim Huybrechts and Alan Norris. Richardson will be most known for stunning Raymond van Barneveld on debut back in 2012.

As for Henderson, he was one of Rob Cross’ scalps as ‘Voltage’ lifted the trophy in January of last year. ‘The Highlander’ has lost out to Cross and Michael Smith respectively in recent times.

Henderson has reached six PDC ProTour quarter-finals this year, with four of those coming in February.

Prediction: 3-0 Henderson – The Scotsman will fancy his chances against a reasonably out-of-sorts Richardson. He wins comfortably for me.

Kyle Anderson overcame a significant scare from the Chinese youngster, Xiaochen Zong in the opening round. ‘The Original’ trailed by two sets against the PDC Asian Tour event finalist, but reeled off three in succession to prevail.

Anderson has slightly struggled this year, reaching three quarter-finals, with all of them coming at the frontend of the year.

Steve Beaton has remained an ever-present at the World Championship extravaganza since 2002, making his 19th appearance in succession.

However, the success has usually stopped at qualifying for Beaton. ‘The Bronzed Adonis’ has progressed further than the second round just twice, and hasn’t in nearly 15 years.

Having qualified for the World Matchplay, Players Championship Finals, World Grand Prix and European Championship, the former BDO champion of the world has had a fairly successful season.

A run to the quarter-finals of the UK Open was one of the six times he’s progressed to a last eight or further this year, as well as completing perfection in hitting the nine-darter on the European Tour.

Prediction: 3-1 Beaton – Anderson just about got over the line in round one, and, despite Beaton’s poor World Championship record, he prevails here.

After reaching the semi-finals of the World Grand Prix and Players Championship Finals, Chris Dobey comes into the tournament in good form.

‘Hollywood’ was also a runner-up at the Danish Darts Open in June, losing out to Dave Chisnall in the final.

Dobey faces a tough second round opposition in the Netherlands’ Ron Meulenkamp – who whitewashed New Zealand’s Ben Robb in the first round.

The Dutchman has reached multiple semi-finals on the ProTour, though, hasn’t won at a major since last year’s World Championship.

Rob Cross and Adam Hunt defeated ‘The Bomb’ in his two major appearances this year, with Meulenkamp looking to bounce back at Alexandra Palace.

Meulenkamp did knock out Gary Anderson at the 2016 Players Championship Finals – which remains his best major result to date, reaching the last 16.

Prediction: 3-1 Dobey – His television form has been simply sensational this year, and that’s continues into the World Championship in my opinion.

Danny Noppert faces a tough first hurdle tussle as he takes on the youngster Callan Rydz – who defeated Steve Lennon in a Monday evening thriller.

Having claimed titles on both the Challenge Tour and Development Tour this year, Rydz has been tipped by many to have a big future in the sport. The Newcastle man is a back-to-back World Youth Championship quarter-finalist at the age of 21.

A landmark run at Players Championship 18 in Wigan announced his quality to the world, in a run which saw him average over the 100 mark twice in defeating Brendan Dolan, Chris Dobey, Steve Beaton and Stephen Burton, before losing out to eventual champion, James Wade.

Noppert has himself undergone a monumental season, reaching his first televised final since winning through at PDC Qualifying School. ‘Noppie’ made the World Series of Darts Finals final, losing to only Michael van Gerwen in Amsterdam.

The Dutchman made his World Matchplay debut in July, and pulled off a first round win over former champion Daryl Gurney at the World Grand Prix.

Noppert is seeded this time around after whitewashing Hong Kong’s Royden Lam at the Alexandra Palace in December of last year.

The old Dave Chisnall couldn't win a major…but we've seen a totally new Chizzy this season and, crucially, this week. One more win to go – he can do this! pic.twitter.com/16BW5WyQtD

Since embarking en route to the World Grand Prix final in October, Dave Chisnall has thrown his name back into the mix for potential Premier League selection.

‘Chizzy’ has two times reached the World Darts Championship quarter-finals, and is still searching for that illusive maiden major crown after losing in six successive finals.

Vincent van der Voort will be Chisnall’s second round opponent, in a repeat of the pair’s 2017 World Championship meeting – which saw the Dutchman whitewash the Englishman.

The duo have met nine times in total, with Chisnall having won six to van der Voort’s three.

Van der Voort, who defeated 17-year-old Keane Barry in the opening round, has remained a constant threat on the professional circuit, amid consistent back injuries.

The ‘Dutch Destroyer’ has reached six quarter-finals this year, including runs at the European Championship, Austrian Darts Championship and Dutch Darts Masters in front of a home audience.

Prediction: 3-2 Chisnall – Many fancy Chisnall for a one at Alexandra Palace this year, and I’m one of them, though, it won’t be a stroll in the park with the Dutchman around.

The Iceman has produced one of the greatest ever performances in a professional final – where does it rank for you? ?

After defeating Michael van Gerwen in the semi-finals en route to defending his Grand Slam of Darts crown, Gerwyn Price has been labelled as the unofficial world number two.

He and van Gerwen contested a terrific final at the Players Championship Finals in Minehead, with the world number one reigning victorious on that particular occasion.

‘The Iceman’ was also a finalist at October’s European Championship in what has been a sensational year for the Welshman.

Price topped the Players Championship Order of Merit, winning three titles and reaching an additional final with an unsuccessful outcome.

Price will take on William O’Connor as his World Championship campaign commences at Alexandra Palace. The pair have met three times before, with Price holding the slender advantage, though, O’Connor won their only staged encounter during the 2015 European Tour.

O’Connor produced nothing spectacular in his first round victory over Marko Kantele, but did enough to whitewash the Fin and set up a clash with Price.

The Limerick man partnered Steve Lennon in leading Ireland to the World Cup of Darts final in June, and was a recent quarter-finalist at the Players Championship Finals, defeating Gabriel Clemens and Krzysztof Ratajski on his way.

‘The Magpie’ was spiralled into the headlines when lifting his maiden PDC title in April, beating Nathan Aspinall in the final. He averaged 98.6 in the final, having beaten Steve Beaton with a 105.8 and Daryl Gurney with a 102.2 earlier in the event.

Prediction: 3-1 Price – O’Connor said in his previous post-match and I believe he will, though, Price has been of a different gravy in recent months and I can only see one man stopping him in London.