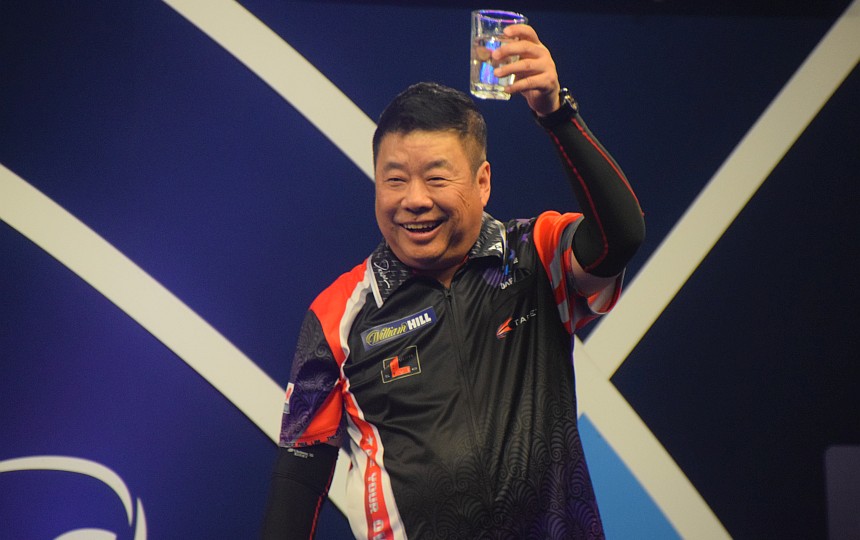 The action will get underway from 1pm at Ally Pally, with the television cameras and the millions of viewers around the world being hooked on the biggest tournament in the sport.

Darius Labanauskas makes his way onto the stage! ?

Labanauskas has embedded himself into the history of the sport in Scandinavia after becoming the first Lithuanian tour card holder and also the first to appear at the World Championship.

‘Lucky D’ embarked on a run to the third round 12 months ago, denying Raymond van Barneveld in his penultimate World Championship as a professional.

As for Edgar, he was one of three to pull through the recent Tour Card Holders’ Qualifier in November. ‘Prime Time’ defeated the highly-fancied Adam Hunt in the decider to seal his second Ally Pally appearance.

“I have wanted to play Darius on the tour all year. A few years ago, I lost to Robert Thornton at the UK Open and the whole following year, I had a photo of him in my suitcase thinking, ‘I’ve got to beat him, I’ve got to beat him’ and beat him 6-1 the next time we played and have never lost to him since. So I really want this win and it would put a lot of things right in my own head,” Edgar told DartsWeb ahead of his first round rematch with Labanauskas.

Prediction: 3-0 Labanauskas – The Lithuanian has been arguably the most consistent on the PDC Nordic and Baltic tour this year and knows how to win against the very best on the World Championship stage.

Anyone underestimating Japan’s Yuki Yamada is wrong to be doing so. He’s been one of the most dependable and undeviating players on a star-studded PDC Asian Tour this year.

‘Yammer’ reigned victorious in Hong Kong, beating Paul Lim to claim his maiden title on the circuit, and pinned a blistering 121 checkout against Gary Anderson at the Japan Darts Masters, sparking utter delight amongst the Yokohama audience.

Meikle is without a doubt the better player, climbing up to 70th on the PDC Order of Merit after a landmark run to the third round in Minehead.

The 23-year-old has four Development Tour titles to his name and has reached a ProTour quarter-final this year, seeing off Peter Wright in the second round of that particular event.

Prediction: 3-1 Meikle – Yamada will be a hazardous product for Meikle but his recent Players Championship Finals run will place him in good stead as his Ally Pally debut beckons.

The World Championship wouldn't be the same without Paul Lim!

The 64-year-old has qualified once again… Last year, he nearly hit one of the greatest nine-darters of all time! pic.twitter.com/cNfdJzqeym

Lim, aged 65, will make his 24th World Championship appearance, with his debut coming back in 1982.

The ‘Singapore Slinger’ will return to the World Championship stage two years after famously wiring double 12 for a nine-darter against Gary Anderson, almost three decades after hitting the very first at a World Championship – when his opponent was just two years of age.

The 65-year-old finished third on the PDC Asian Tour this year, winning in both South Korea and Hong Kong, and as always will prove a threat to the PDC regulars at Alexandra Palace.

As for Woodhouse, his rise to stardom continued in dethroning Daryl Gurney at November’s Players Championship Finals. His most ground-breaking run on the professional circuit remains a run to the quarter-finals on the ProTour – where he was eventually denied by Poland’s Krzysztof Ratajski.

Prediction: 3-2 Lim – I’m going for a relatively sizeable upset in this one. Lim exited at the first hurdle last time around and I can’t see that happening again despite the reasonably good form of his opponent.

Jermaine Wattimena is the second highest seed to be taking to the stage on Saturday as he faces the newly-crowned World Youth champion, Luke Humphries.

Humphries comfortably came through his first round clash with South Africa’s Devon Petersen on Friday evening, and will be hoping to embark on yet another Alexandra Palace run after last year’s heroics.

The Newbury ace could potentially construct a fourth round rematch with world number two Rob Cross, though, Wattimena is one of the men who stand in his way.

After pushing Gary Anderson to the brink of defeat last time around, Wattimena has undergone a consistent year on the circuit, reaching the quarter-finals on 11 occasions, including a last eight run at the World Grand Prix in Dublin.

‘The Machine Gun’ also made two finals on the ProTour, losing to Michael van Gerwen and Brendan Dolan, respectively, as well as making his debut alongside van Gerwen in Dutch national colours.

Prediction: 3-2 Wattimena – 2019 has been the Dutchman’s best year as a professional darter. He has been outstanding across the year, and for me that continues into the biggest tournament of the lot.

Mark McGeeney and Matt Campbell – two winners of BDO-ranked titles in the last 18 months – will debut at the Alexandra Palace.

The pair’s years couldn’t be more different. McGeeney won through at Qualifying School, but since then has struggled in terms of results, while the Canadian has claimed his maiden CDC crown in North America as well as finishing as the top Canadian on a tour filled with talent.

McGeeney has the experience, but the scoring power of the Canadian will prove essential and a potential threat to anyone.

Prediction: 3-1 McGeeney – Campbell will cause the former Lakeside finalist some problems but experience will save the day in Stockport man’s case.

Krzysztof Ratajski vs Jamie Hughes is a mouth-watering second round prospect on Tuesday afternoon, though, a certain Austrian in Zoran Lerchbacher will have something to say about that.

In spite of making three appearances at Alexandra Palace, Lerchbacher has won just once, with that win coming against Plymouth’s Simon Stevenson.

‘The Hypercane’, a two-time finalist on the PDC ProTour, will have the odds stacked up against him as he takes on the Czech Darts Open champion, Hughes.

Since winning his tour card in January in scintillating style, ‘Yozza’ has underperformed slightly bar a few quarter-finals and of course his landmark win in Prague.

Prediction: 3-1 Hughes – The highly-anticipated Ratajski-Hughes thriller will take place on Tuesday. I see Hughes breezing past Lerchbacher in some style. The Austrian has been below-par on the circuit this year, and will struggle against a big stage player in Hughes.

Ally Pally brings the best out in Barney…

Will we witness one last charge from Raymond van Barneveld in his final ever tournament?

Saturday evening could realistically be the last time we ever see Raymond van Barneveld – the five-time world champion – on our television screens. A glittering career – which catapulted the growth of the sport in the Netherlands is coming a swift end.

Van Barneveld, who returned to form in recent weeks with a quarter-final run in Minehead that saw him deny both Nathan Aspinall and Glen Durrant, will be hoping for a fairytale ending similar to that of Phil Taylor two years ago.

Although, America’s Darin Young will have a lot to say about that. Young will make his first World Championship appearance in three years after a career-best season on the CDC Main Tour – which saw him finish top of the Order of Merit.

Prediction: 3-1 van Barneveld – Barney’s emotional farewell will last another round at least I feel. Young will give him a run for his money but the Dutchman looked in promising fettle in Minehead.

Both players return to the stage that unearthed them as darting superstars. In Huybrechts’ case it was a run to the quarter-finals eight years ago, while in Cross’ it was beating the legendary Phil Taylor in the final to lift his maiden major crown.

After a disappointing 2018 season following his World Championship triumph, Cross has returned to form this year, winning both the World Matchplay and the European Championship.

Huybrechts, who defeated the 21-year-old Geert Nentjes in the first round, has experienced a rather poor season compared to his sky-high standards, reaching just the solitary quarter-final.

If both players click into gear, this match has all the ingredients to produce fireworks.

Prediction: 3-0 Cross – Cross and the World Championship are a deadly duo, whilst Huybrechts didn’t look great in his narrow first round victory.