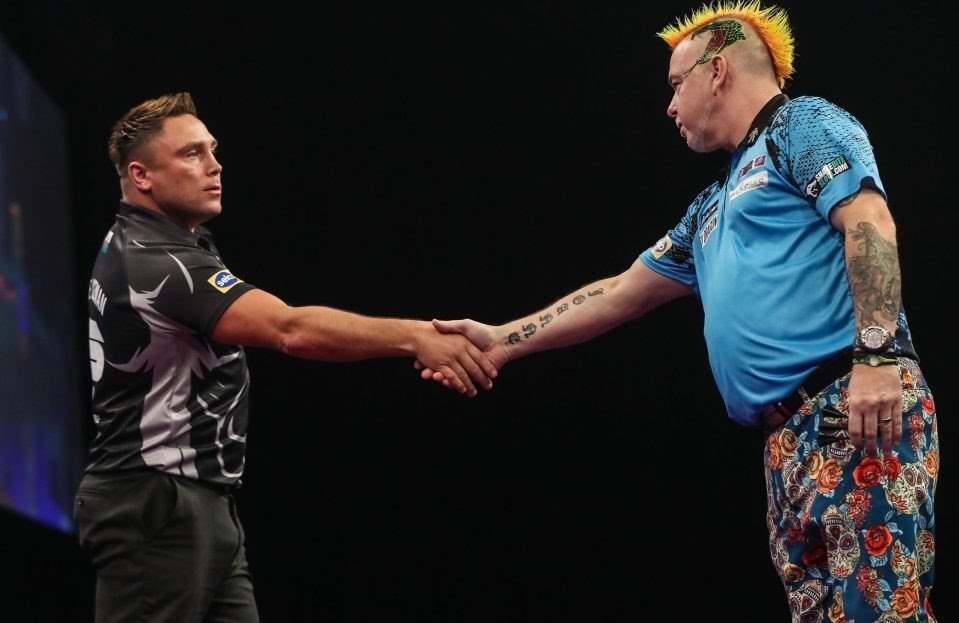 However, Nathan Aspinall and Peter Wright – both of whom have lifted the prestigious UK Open in recent years – will be looking to add to the many bolts out of the blue.

After emerging as a 500/1 semi-finalist 12 months ago, whilst having little to nothing in his bank account, Nathan Aspinall has embarked on yet another World Championship run to the last four.

‘The Asp’ was blown away by a rampant Michael Smith a year ago, with world number one Michael van Gerwen being his opposition this time around.

Stockport’s Aspinall has came out victorious against the world number one twice in three attempts this year, including a monumental 6-1 victory whilst averaging 102 on the ProTour.

Michael van Gerwen sets up a Semi-Final clash with Nathan Aspinall after a hard-fought 5-2 win over Darius Labanauskas! pic.twitter.com/Cep382ziA4

Van Gerwen is competing in his fourth successive World Championship semi-final, having dropped just one set leading up to the quarter-finals, thrashing Jelle Klaasen, Ricky Evans and Stephen Bunting.

His clash with Darius Labanauskas was one of slightly tougher proportions, though, thanks to numerous squandered doubles from the Lithuanian, the Dutchman breezed through.

Aspinall’s finishing has been slightly concerning, and is in fact the worst of the final four, whilst van Gerwen’s lack of concentration has been detectable, namely his rather bizarre decision to attempt a 141 finish after his last eight opponent, Labanauskas, pinned back-to-back maximums, despite still having 444 on the board.

PRICE IS INTO THE SEMI-FINALS!

Gerwyn Price secures his spot in the Last 4 after a dominant 5-1 victory over Glen Durrant! pic.twitter.com/i1ZFgXHfPG

When Gerwyn Price and Peter Wright locked horns in November’s Grand Slam of Darts final, the Welshman produced a career-best televised performance in wiping the floor with the former major champion.

Despite standing on the brink of a World Championship final, both Price and Wright could quite easily have fallen at their first hurdles, narrowly surviving scares at the hands of William O’Connor and the Philippines’ Noel Malicdem, respectively.

Markham’s Price was left counting his lucky stars as O’Connor mistakenly attempted to hit double one, whilst having four on the board, while Wright required two visits of brilliance to see off the fearless Filipino, Noel Malicdem.

Since an eventful opening round, Price has remained dominant in reaching the semi-finals, in spite of being blistering yet inconsistent in patches. ‘The Iceman’ averaged 104 in whitewashing John Henderson, before setting up a last eight showdown with Glen Durrant with a lacklustre victory over Simon Whitlock.

Peter Wright breathes a sigh of relief as he gets over the line in a 5-3 win over Luke Humphries!

Wright averaged 105.86 and hit the EIGHTH 170 finish of this World Championship! pic.twitter.com/cM1sYVaVTF

In contrast, Wright has become embroiled in tussles throughout since denying Malcidem. He saw off Japan’s Seigo Asada, before narrowly denying Jeffrey de Zwaan.

‘Snakebite’ produced his career-best World Championship performance in the quarter-finals in convincingly seeing off Luke Humphries, whilst averaging over 106 at Ally Pally.

Wright faced the Welshman during the 2014 World Championship, and whitewashed him whilst being the firm favourite. Price, though, has won four of the pair’s last five meetings, with ‘Snakebite’ holding a 13-5 advantage.