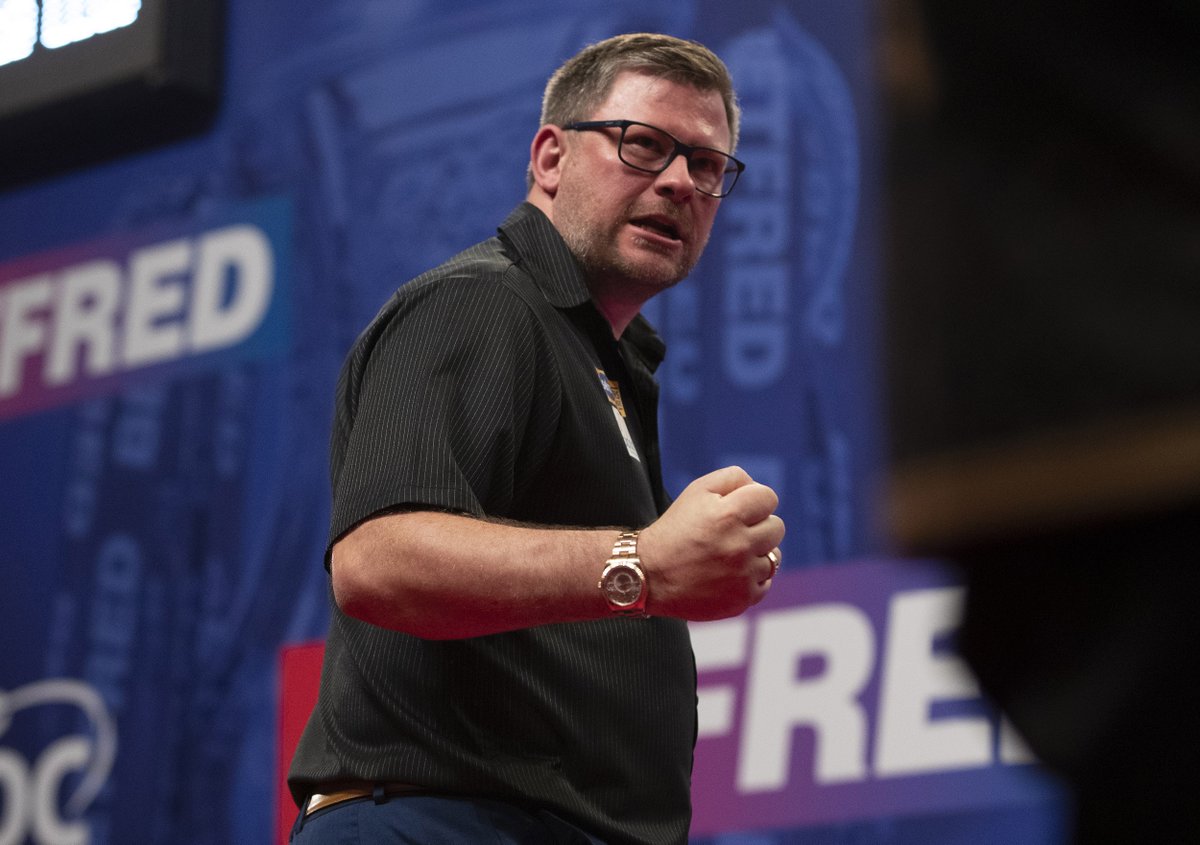 Nathan Aspinall and Dimitri Van den Bergh will bring the curtain down on the opening hurdle at the Marshall Arena, before the second round gets underway.

World number one Michael van Gerwen headlines the second round action, while six additional televised champions take to the stage as well as a German outsider who has reached a final in front of the cameras.

Neither Nathan Aspinall nor Dimitri Van den Bergh have ever surpassed the opening round of the World Matchplay, the difference being the former is a two-time televised event winner and the latter is a debutant.

Aspinall recorded an average in excess of 102 on debut last year in Blackpool, though, his excellence was short of the mark against a resurgent Mervyn King.

Two-time world youth champion Van den Bergh will make his first Matchplay appearance to the surprise of many, having qualified through the ProTour Order of Merit after reaching two finals last season.

Aspinall was the crowned the ‘lockdown champion’ during the four-month hiatus, reigning victorious in the innovative Home Tour, before making his anticipated return last week with two deep runs to the latter stages during the Summer Series.

Aspinall has encountered and defeated the Belgian four times in the professional ranks, with the first of those coming six years ago at Qualifying School and the most substantial coming in the 2019 World Championship quarter-finals.

Michael Smith and Mensur Suljovic – two esteemed players who have won on television and participated in the Premier League – commence the second round in Milton Keynes.

Both Smith and Suljovic recorded imposing averages exceeding the 100 mark in their opening round victories, though, prevailed in rather different circumstances.

Suljovic required extra-time to eventually defeat an also impressive Jamie Hughes, whereas Smith raced out of the blocks and thrashed Welshman Jonny Clayton to the loss of a mere three legs.

Despite performing superbly well and bouncing back from a below-par Summer Series, Smith wanted more from himself following his win, while Suljovic was his usual flamboyant self both on the stage and in the post-match press conference.

If the highly-regarded pair emulate or better their first round performances, be prepared for fireworks.

However, seeded eighth and ninth respectively, both Anderson and Wade renew their somewhat forgotten rivalry on Tuesday evening, with both performing far from their usual brilliant best in the first round.

Wade was forced into a tie-breaker by former world youth champion Keegan Brown, while Anderson eventually battled past a dogged Justin Pipe – who was nursing an elbow injury upon his Matchplay return.

38-year-old Wade, who beforehand claimed a first title for almost a year during the Summer Series, was outscored by Brown but his clinical finishing of 57 per cent and three ton-plus checkouts were pivotal in him progressing.

Anderson averaged little more than 90 in fending off fellow Somerset man Pipe, but will be in need a significantly more prolific performance if he’s to deconstruct ‘The Machine’.

Both distinguished major champions have reigned supreme at the World Matchplay previously, albeit in a different atmosphere, and a potential quarter-final clash with Michael van Gerwen awaits the winner.

Only £750 separated Simon Whitlock and Glen Durrant in the PDC Order of Merit, meaning that rather small amount was decisive in Michael van Gerwen avoiding the thorn in his side Durrant.

Van Gerwen was ousted at this stage 12 months ago at the hands of Durrant, and has never beaten the three-time world champion. The world number one is probably feeling fortunate to have avoided the Middlesborough man, without being disrespectful towards Whitlock.

The Dutchman has faced Whitlock 40 times during their illustrious careers, having ran out victorious on 34 occasions, including three times at the World Matchplay.

Whitlock was the first through to the second round on Saturday as he averaged just short of 90 in an emphatic 10-4 win over Ryan Joyce, whereas van Gerwen averaged just spare of the 100 mark in a hard-fought win over Brendan Dolan.

‘The Wizard’ has departed at this stage in three of the last five years, while van Gerwen hasn’t surpassed the second round for three years himself – a record the three-time world champion will be vying to correct.

Following the swift departure of defending champion Rob Cross, an opportunity beckons for both Gabriel Clemens and Krzysztof Ratajski, especially the latter considering his lack of fortune in the major televised tournaments.

Many often forget that Ratajski has lifted a televised honour, having done so at the World Masters three years ago in surroundings similar to those in Milton Keynes, with few spectators in attendance.

Krzysztof Ratajski transformed his floor form to the big stage in round one (Photography: Lawrence Lustig/PDC)

‘The Polish Eagle’ set the standard in the first round, producing a blistering 107.53 average and six maximums in a 10-4 rout of Jermaine Wattimena.

The reigning Gibraltar Darts Trophy champion exited at this stage on debut 12 months ago at the hands of eventual champion Cross, but his opponent Clemens has already ousted him in round one.

German sensation Clemens averaged just 89.22 but it was enough to dethrone the former world champion, though, his performance levels will supposedly need upping against an in-form Ratajski.

Ratajski will be hoping for both him and Suljovic to prevail in order for the pair to lock horns in a repeat of the 2005 Soft-Tip European Championship final.

Day Four of the World Matchplay commences at 6pm from the Marshall Arena in Milton Keynes and is broadcast live on Sky Sports.

Opinion: World Matchplay returns but rather different in appearance