HomeBlogWorld Matchplay Gold - Harrington Goes Back To Back 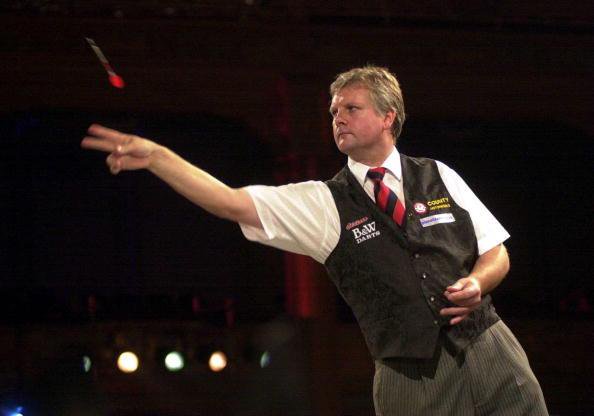 World Matchplay Gold – Harrington Goes Back To Back

In the lead up to the second biggest showpiece event in the PDC calendar, I take a trip down memory lane to look at classic Winter Gardens encounters since the inception of the event in 1994.

For my first offering, it’s back to 1999, and a Matchplay final that didn’t feature Phil “The Power” Taylor for a second consecutive year.

After defeat to Baxter in 1998, it was expected that Taylor would claim the 1999 crown, and continue his dominance, which would continue for near enough twenty years afterwards. Taylor gained revenge in the very first round with a 10-5 win over “The Rocket”.

Although Harrington was number one seed for the event, it was a big ask for him to defend the crown, but he started well, with wins against John Lowe, Steve Raw and Peter Evison to reach the last four.

With a 93.83 average, Harrington defeated Dennis Priestley, 17-10, to book his place in a second consecutive final.

Meeting him there would be Peter “One Dart” Manley, and not Taylor, in another upset.

Manley was a mercurial character, with his big barrelled darts somehow filling the treble twenty bed with pinpoint accuracy to enable him to reach the final.

The newsagent from Cheam in Surrey had come through Ritchie Burnett, Jamie Harvey and Colin Lloyd, before stunning Taylor 17-14 in a classic semi final, despite averaging 91.7 to Taylor’s 95.01.

The stage was set for the final, and Manley, in his crisp white shirt, entering the Arena to the strains of 90’s anthem Tubthumping by Chumbawumba confidently strode onto the stage.

Harrington, dubbed “The Prince of Style” went for his usual white shirt and black waistcoat combo, although this would change during the contest due to the extreme heat on stage.

The first five legs could have seen a 4-1 lead for Manley, but two darts went begging at tops, and another two went awry on double sixteen to allow Harrington to stay in touch at the first break.

The waistcoat was ditched by Harrington at the break, as the temperature rapidly increased, and he won the mini session to pull level at 5-5.

Harrington hit the front for the first time at 6-5, thanks in part to his trusty cover shooting, which he was well known for at the time. Another double sixteen landed for the Chelmsford native to go three clear at 9-6.

Harrington, perspiring at a rate of knots, donned a black shirt for the remainder of the contest, with the mercury at 100 degrees on stage. Manley narrowly missed tops for a 151 checkout, and this would prove costly, as Harrington moved 10-7 ahead with a breath taking 155 checkout of his own on double nineteen. “One Dart” was anything but, missing multiple attempts at the double, but kept in touch at 11-9 with a crucial double ten.

Harrington was proving hard to catch, and kept his three leg cushion for a fair while up to 16-13 to take a firm grip on the match. Manley would make one last effort, and in leg 30, he very nearly achieved the holy grail at the time of a nine dart leg. A 180 followed by a 177 left Manley on 144 for £25,000 and the first live televised nine dart leg. He was unconventional on the finish, opting to go treble eighteen and double top to leave the bullseye, which he agonisingly missed by a fraction. He cleaned up the leg, but Harrington couldn’t be broken, and went one away from the title at 17-14.

With no going back, Manley managed to achieve the break he so badly needed with a 180 and two 140’s moving him within a leg at 17-16 with a blistering eleven darter.

Manley missed six darts to level the contest, while Harrington missed two at tops for the trophy as the drama continued, with Manley nailing double one to keep his dreams alive and force overtime, where the match had to be won by two clear legs.

From here on, Harrington showed his class, nailing double sixteen for the lead. Manley crucially missed two darts at double from 82 to leave Harrington 136 for the title. Two treble twenties left double eight, and Rod made no mistake, pinning double eight for a showpiece finish to take the £14,000 first prize and a second Matchplay trophy on the bounce in a classic.

A jubilant but exhausted Harrington collected the trophy, with Manley rueing missed opportunities to catch the champion at the death. It was no classic on averages, but it remains one of the most dramatic Matchplay finals of all time.