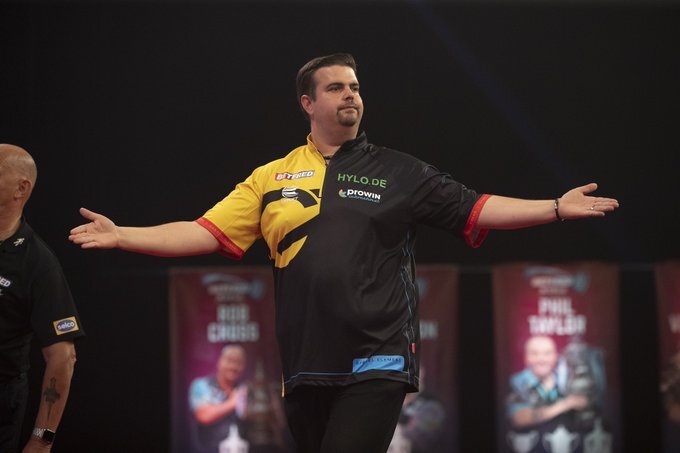 The German debutant took out 170 on the way to a narrow victory and will play Krzysztof Ratajski on Tuesday in the last 16.

Elsewhere on day two, Mensur Suljović came from 9-7 down to beat Jamie Hughes 12-10 in a high-quality tussle, while Glen Durrant averaged 107 in a comprehensive win over Jeffrey de Zwaan.

Peter Wright produced a pivotal 144 checkout to see off a valiant performance from José de Sousa and Michael Smith beat Jonny Clayton 10-3 with an average of 101 and 63% on the doubles.

The night’s entertainment began with that Suljović-Hughes clash, and it was an explosive start from both players with six 180s in the first four legs, of which the Austrian won three.

However, ‘Yozza’ came back fighting and found a 12-darter on the way to levelling at 5-5. The Tipton thrower crucially broke throw in the thirteenth leg to lead 7-6, and held throw at the next two opportunities to go within one of a first ever win at the Matchplay.

‘The Gentle’ roared back with a 117 checkout followed by a 14-darter to send it into overtime, before he took out 127 with Hughes sat on double 8 to deny him a crucial break.

The Englishman missed a dart to level up at 11-11, and Suljović pinned 112 for his fifth ton-plus finish of the contest and to win an incredible game 12-10.

The high standard continued into the second game of the night as 2019 semi-finalist Glen Durrant stormed into a 4-1 lead against 2018 semi-finalist Jeffrey de Zwaan courtesy of a hat-trick of 14-darters.

‘Duzza’ is known for his consistent scoring and clutch finishing, and produced that to a tee in the second session to gain a 7-3 advantage, before starting off the next two legs with 180s and converting them into wins to send the Dutchman to the point of no return. 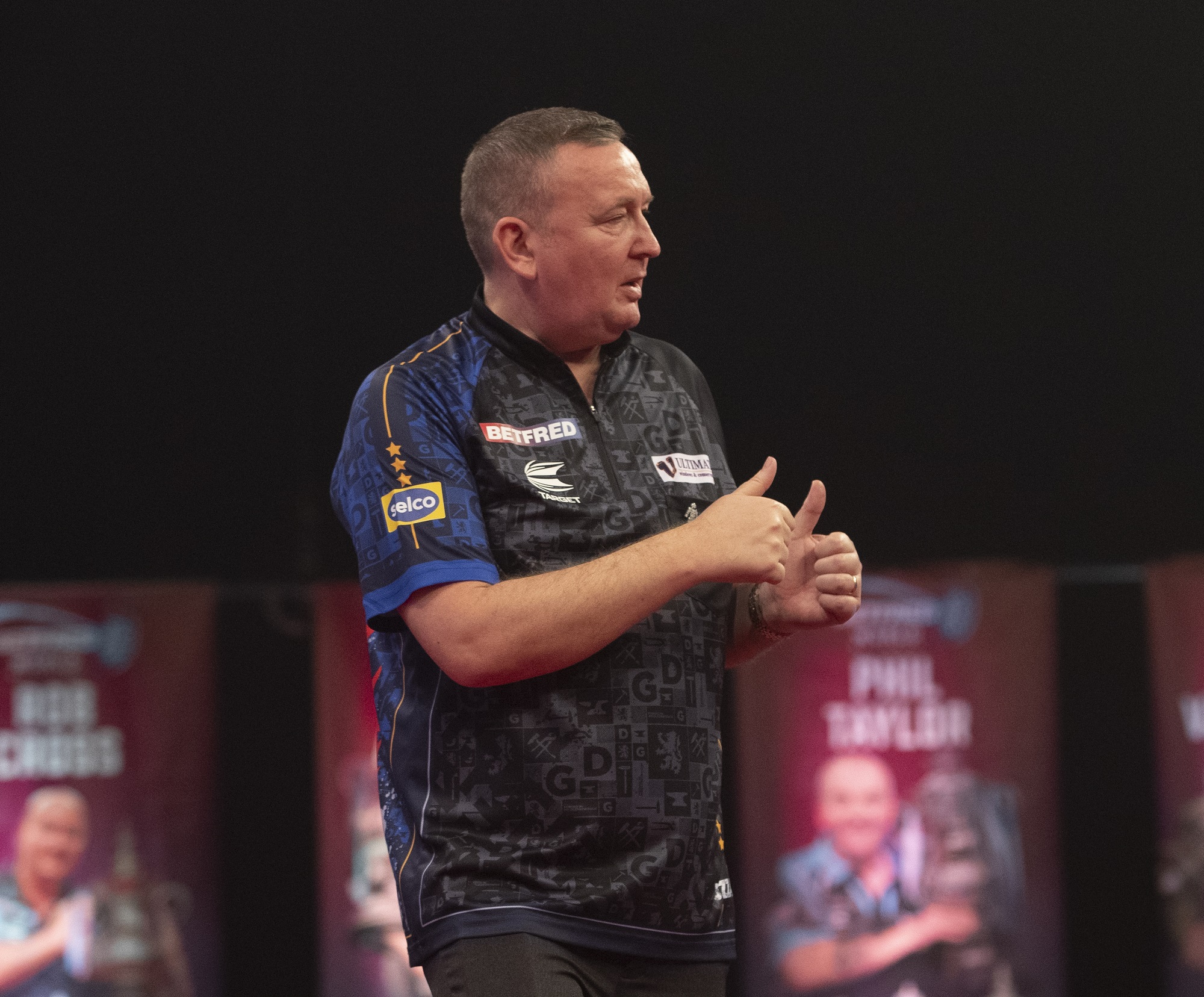 Durrant plays Peter Wright in the next round on Tuesday (Photography: Lawrence Lustig/PDC)

A 12-darter finished on the bullseye rounded off a superb display for the three-time Lakeside champion.

It was a scrappy start to the match between Cross and Clemens, with ‘The German Giant’ leading 3-1 only for the former World Champion to find his form and peg Clemens back at 3-3.

A World Series event finalist, Clemens then took out a huge 170 checkout to gain a 5-3 advantage, but Cross kept hanging in there as he found an 11-darter to go in at 5-5.

‘Voltage’ led for the first time at 6-5, but the German finally showed his ProTour form to take a 9-6 lead. The Hastings thrower had a chance to send it into extra-time, but squandered his opportunity, allowing Clemens to knock out the defending champion in the first round.

It’s the first time that has happened since 2006. For a while, it looked like Peter Wright would join Cross as an early casualty as two-time PDC event winner José de Sousa took out 161 en route to leads of 5-2 and 8-5.

At that point, World Champion ‘Snakebite’ took off his newly-installed glasses and started to turn the game in his favour. The standout moment was a 144 checkout to break and close the gap to one, a shot reminiscent of the 140 against Noel Malicdem in the second round at Alexandra Palace. 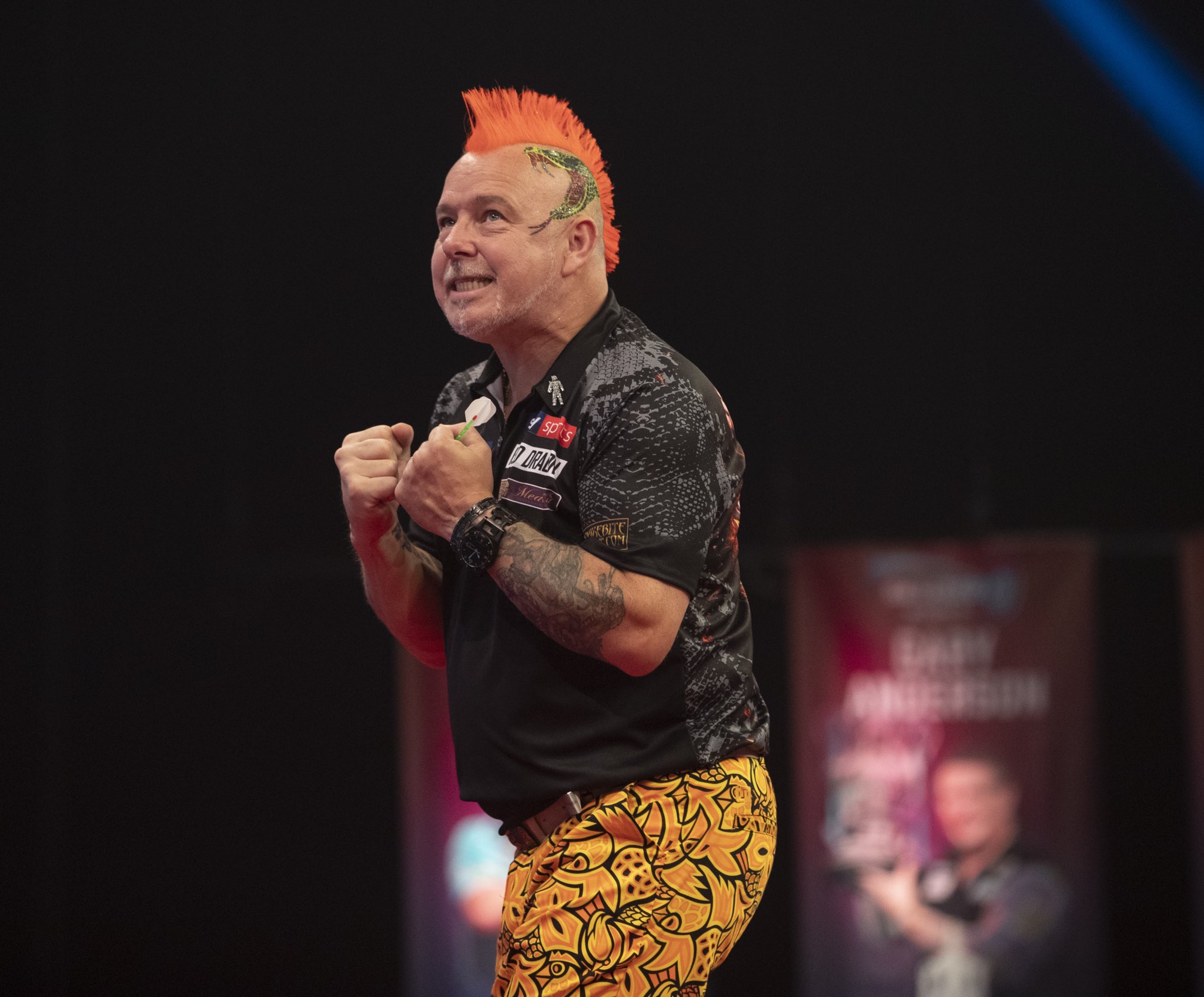 Taking off the glasses did the trick for Wright (Photography: Lawrence Lustig/PDC)

Michael Smith rounded off the night with a 10-3 success against Welshman Jonny Clayton, winning an incredible eight legs on the spin at one point to break the back of the match.

‘Bullyboy’ never really looked like missing at the big moments and inflected a third straight first-round defeat at the Matchplay for Clayton. Smith will play Suljović in the last 16.

There are five more matches from Milton Keynes on Monday evening as Dave Chisnall, Ian White and Gerwyn Price take to the stage.