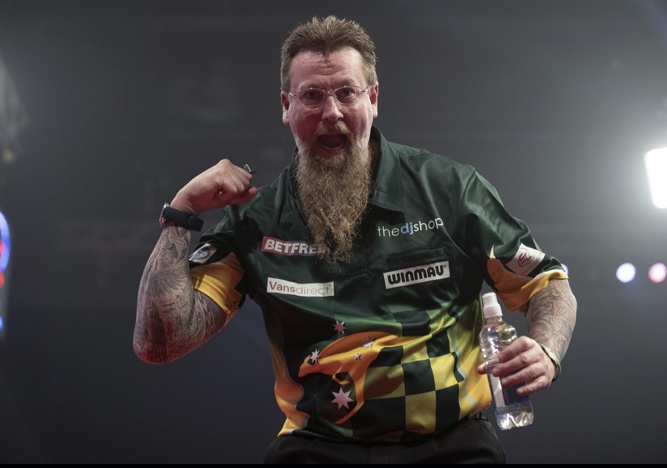 Michael van Gerwen endured a second round exit at the hands of Simon Whitlock on Day Four of the Betfred World Matchplay, while Nathan Aspinall also departed.

The curtain came down on the opening round on Tuesday evening as the second hurdle got underway, but shocks continued to transpire and seeds tumbled.

Van Gerwen was out-of-sorts to say the least as former European Championship winner Whitlock ousted the world number one with considerable ease.

Whitlock raced out of the gates, constructing a 5-0 advantage at the interval, with three 180s and four legs won in 15 darts or less, before van Gerwen claimed consecutive legs and was seemingly mounting his charge.

Nevertheless, the Australian ace responded with back-to-back maximums and a 12-darter to regain a four-leg lead, before holding throw to lead 7-3 at the second break.

Whitlock then reeled off four of the next five legs to run out victorious, meaning that Michael van Gerwen has now failed to surpass the second round at the World Matchplay in three years.

“I’m over the moon with that, but I always believe I can beat the best,” said Whitlock. “Michael is the best player on the planet but he had an off-day today and I took advantage of it.

“I just put Michael out of the picture and pretended I was playing local darts.

“I believed in myself and that’s the only way to do it. If you play the player you will put yourself in trouble.

“Experience counts for that, and along with a love for the game, that’s what keeps us older players going.”

It was far from the World Matchplay Michael van Gerwen was hoping for (Photography: Lawrence Lustig/PDC)

With scores level at four apiece in the early stages of a mouth-watering affair on paper, Anderson claimed five in succession and pinned a staggering six maximums during a real purple patch that was pivotal in him prevailing.

Despite being situated on the brink of elimination, Wade hung in there and clinched four of the next five legs with trademark finishing to move within two adrift of the world number eight.

Anderson, though, converted his ninth maximum in the 18th leg of the match to overcome a valiant Wade and seal his place in the quarter-finals for just the fourth time.

Meanwhile, Michael Smith and Krzysztof Ratajski will lock horns in the last eight after the former Gibraltar Darts Trophy champions were both in need of extra-time in order to prevail.

Smith battled back from 4-1 and 9-6 behind to see off Austria’s Mensur Suljovic, with four ton-plus checkouts helping last year’s runner-up secure his place in the quarter-finals.

After squandering a hefty advantage, Suljovic was forced to hold throw in the 26th leg in order to remain intact, and missed doubles proved costly, before Smith executed a mesmerising 110 checkout to seal the deal.

Michael Smith has relieved to get over the finishing line (Photography: Lawrence Lustig/PDC)

Poland’s Ratajski performed significantly better than Smith, recording an impressive 99.69 average and checkouts of 110, 113 and a 130 on the bullseye in a 12-10 win over debutant Gabriel Clemens.

‘The Polish Eagle’ was in firm control of the clash until the latter stages beckoned. Clemens took the lead for the first time at 10-9, before the German missed multiple darts at double in the following leg, handing the Pole the chance to throw for the match.

Former World Masters champion Ratajski proceeded to convert a 14-darter and book his place in his second televised quarter-final in the professional game.

The Belgian debutant constructed a 6-2 lead courtesy of three 13-darters, and Aspinall was unable to form a comeback, with Van den Bergh pinning checkouts of 103 and 156 en route to getting over the line.