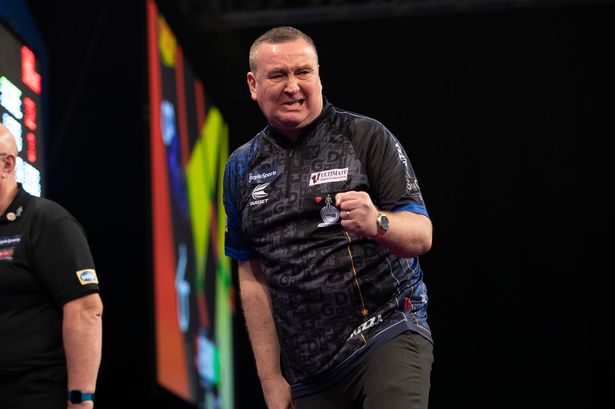 Going into day 7 of the cross-code tournament at Aldersley Leisure Village in Wolverhampton, ‘Duzza’ was the only player BDO qualifier remaining in the draw, despite having held a PDC Tour Card for ten months.

He was selected for the tournament due to being the reigning BDO World Champion, and the Middlesbrough man has certainly made the most of that so far, squeezing through Group H and coming from behind to beat Gabriel Clemens 10-9 in the last 16.

Michael Smith was the other man to progress from that group, and Durrant and ‘Bullyboy’ met in the quarter-finals on Friday evening. Smith was looking to get another one over on ‘Duzza’ after beating him at the World Matchplay semi-finals, and he had darts to 3-0 up, only to squander them and allow the three-time Lakeside champion to level at 2-2 and 3-3.

Durrant then went off the boil slightly with St. Helens’ Smith taking full advantage and establishing a 6-3 lead. The match’s twists and turns showed no signs of letting up as two-time PDC ranking event winner Durrant reeled off a superb seven straight legs including two 11-darters to go within sight of his third major PDC semi-final in a matter of months.

The next six legs were all holds of throw as ‘Duzza’ kept hold of his lead at 13-9 before breaking the Smith throw only to immediately lose that advantage. Just as Durrant was started to look comfortable, the PDC World Championship finalist posted three consecutive 180s in scoring visits to win a leg in 11 darts and threaten a 9-darter.

He still failed to win that second leg though due to the two-time World Master producing a 12-darter. Durrant saw out the game 16-12 to set up yet another semi-final.

The night’s other match saw Peter Wright take on Dave Chisnall, and they couldn’t be separated in the early stages until the World Grand Prix runner-up claimed the first break of throw to lead 6-4.

At that point, Wright somewhat unsurprisingly changed his darts, leading to a change in fortunes for ‘Snakebite’ after initially falling further behind before eight consecutive legs took him to 13-8 ahead.

There was then a resurgence from Chisnall as Wright’s imperious doubling started to falter and the scoreline was tightened to 13-12.

However, the former UK Open Champion then produced three straight 13-darters to move closer to a first singles major on Sky Sports and set up a blockbuster meeting with Durrant on Sunday afternoon.