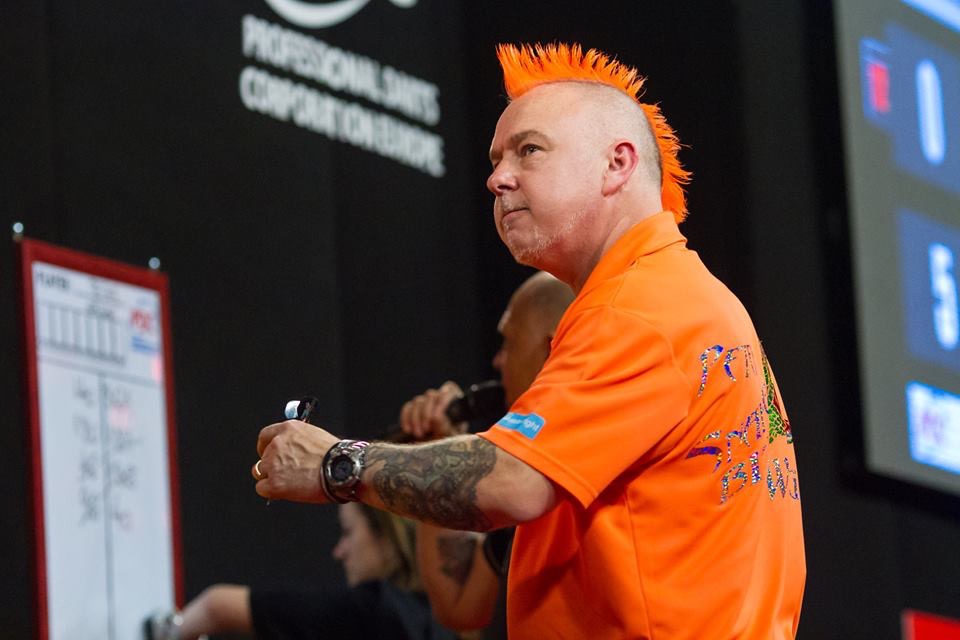 Peter Wright picked up his first ranking title of the year at the Robin Park Leisure Centre this afternoon while Rob Cross reached his second final in successive days.

Wright, whose last title was the German Darts Masters on the World Series circuit last October, came out on top as he denied Rob Cross a weekend Wigan double.

‘Snakebite’ hadn’t won a PDC title for over seven months before play began in the 14th Players Championship event of the year but pocketed £10,000 with a 6-4 win over the World Champion in the final.

Wright enjoyed wins over Ross Twell, Davy van Baelen, Josh Payne and Toni Alcinas en route to the quarter-finals in Wigan, where he fought back from 4-0 down to edge past the World Youth Champion and German Darts Masters runner-up Dimitri van den Bergh 6-4 to secure his place in the last four.

The former World Championship finalist and UK Open winner was forced to take out an astonishing but crucial 161 outshot in his semi-final clash with Jermaine Wattimena before ending Rob Cross’ run in the final.

Following his win over Cross, Wright said: “I thought I was going to throw it away there, I was glad to see the winning dart go in.

“My form has been very inconsistent, I can’t explain why but hopefully I’ve got that sorted now and I’ll be on the up from here.

“I had so much confidence coming into the weekend and I said I was going to win both titles, but to win one tournament with the standard of play here is a big achievement so I’m happy with that.

“I feel like I’ve been coming into form recently, it’s just a case of building some consistency now to keep winning more titles.”

Both Peter Wright and Rob Cross have returned to form at the right time of the year with the World Matchplay just weeks away and just six month until the William Hill World Darts Championship at the Alexandra Palace in London.

After picking up the top prize yesterday afternoon, Cross breezed through to the final for the second successive day in Wigan as he overcame William O’Connor, Mark Webster, Martin Schindler, Ryan Meikle, Adam Hunt and Michael Smith before falling at the final hurdle.

Cross averaged over the 100 mark in five of his seven matches at the Robin Park Leisure Centre this afternoon and produced an impeccable 106.8 average in his 6-3 win over Martin Schindler in the third round. ‘Voltage’ got revenge on the German after suffering a whitewash defeat at the stage a few months ago.

Ron Meulenkamp stole the show in the opening round as, despite suffering an exit at the hands of Mervyn King, the Dutchman put in a sensational display.

Meulenkamp set up the 141 outshot for the perfect nine-dart leg and on both occasions wired the ninth dart. ‘The Bomb’ chose double 12 in the first of his nine-dart attempts before switching to the right corner of the board at his second attempt.

The Dutch ace suffered a 6-5 defeat to the former Players Championship Finals runner-up, however, got the fans talking following a immense two legs.

Jermaine Wattimena backed up his semi-final at yesterday’s event with a second semi-final of the weekend at Players Championship 14 while Dirk van Duijvenbode continued his terrific weekend by reaching the last 16 and sending Dave Chisnall to a last leg shootout at that stage.

Adrian Lewis failed to bring his Gibraltar form to Wigan as he suffered an opening round exit on Saturday before being dumped out in the second round by Ross Smith on Sunday afternoon.

Elsewhere, Adam Hunt produced a sublime performance as he reached the quarter-finals while Daryl Gurney and Mensur Suljovic both suffered early exits at the hands of Dirk Van Duijvenbode and Jeffrey de Graaf.

The Players Championship will return on the 26 June for a midweek special in between two European Tour events in Hamburg and Hildesheim. Both £75,000 competitions will be available to follow free of charge on the new DartConnect system and you will be able to watch live on PDCTV and various bookmakers across the globe.