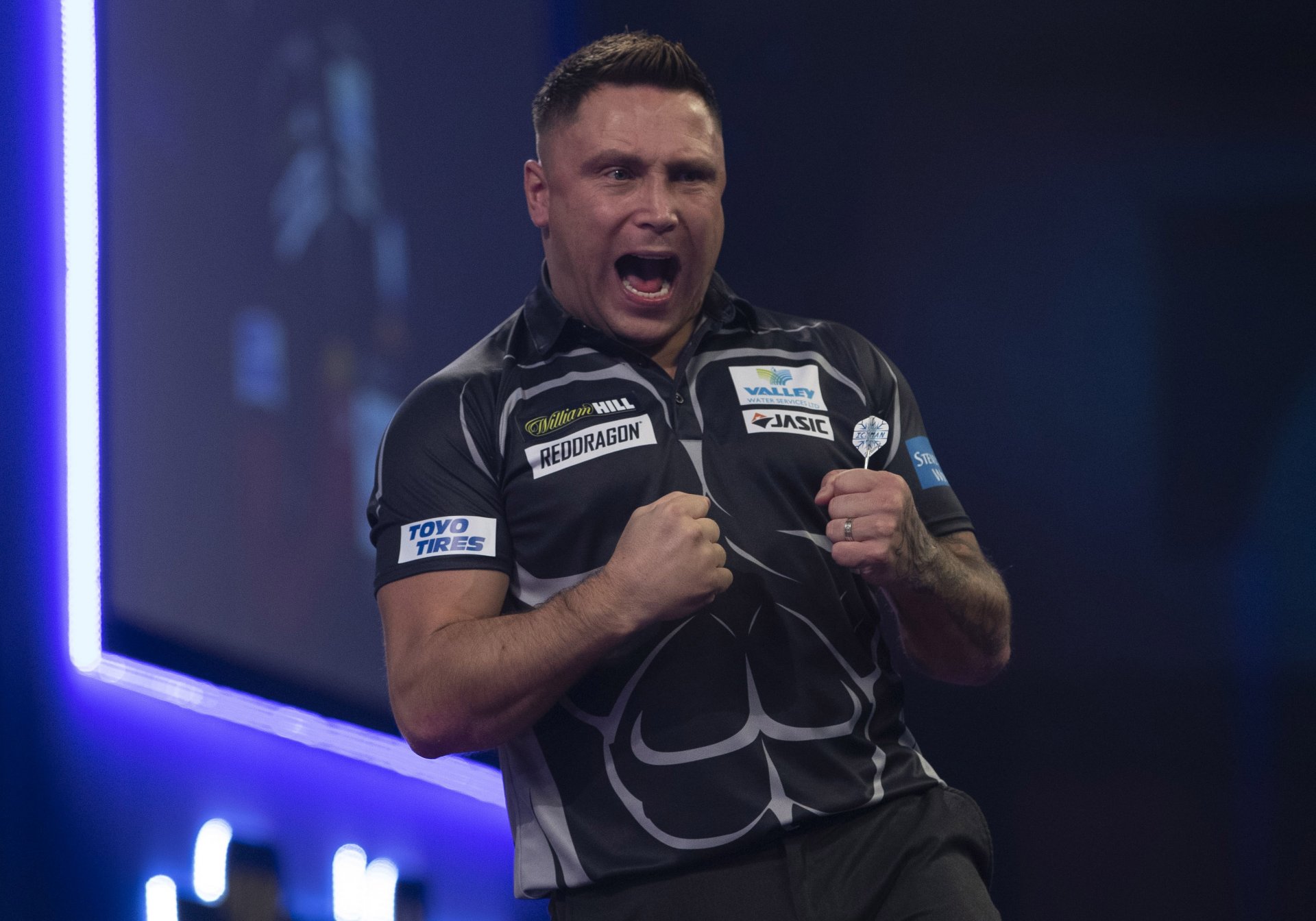 Gerwyn Price, Glen Durrant and Darius Labanauskas all reached the quarter-finals of the PDC World Darts Championship for the first time as the line-up for Sunday’s last eight was confirmed on day 13 of the world’s biggest tournament.

The evening session saw three hard-fought matches with the more illustrious players coming through in all three after surviving scares of varying degrees, while two World Youth Champions in Dimitri Van den Bergh and Luke Humphries booked a return to the quarter-finals at Alexandra Palace in the afternoon session, alongside another excellent performance from Darius Labanauskas.

Jeffrey de Zwaan came from 3 sets and 2 legs down to Peter Wright to eventually force a tiebreak which Wright won 5-3, before Chris Dobey squandered two-leg leads in consecutive legs against Glen Durrant which proved to be crucial in a 4-3 win for the three-time BDO World Champion.

In the final game of the last 16, two-time Grand Slam Champion Gerwyn Price regressed to the level of his match against William O’Connor but got over the line, seeing off Simon Whitlock 4-2.

Day 13 got underway with a real chance for bona fide legend Steve Beaton to finally book his place in the quarter-finals of a PDC World Championship for the first time.

He played the Lithuanian Darius Labanauskas, who has gained a reputation for upsetting the odds already after just two Alexandra Palace campaigns.

All five legs in the first set went with throw, handing it to ‘Lucky D’, but ‘The Bronzed Adonis’ came from two down in set two to level up, only to see Labanauskas re-take the lead immediately after.

Three straight legs saw Beaton make it 2-2, but he failed to find that form in the remainder of the match and Labanauskas sailed through to book his place in a first televised PDC quarter-final and storm further up the Order of Merit, provisionally to number 52.

Kim Huybrechts survived a clutch of set darts from Luke Humphries in the day’s second game as ‘The Hurricane’ looked to reach the last eight at the Palace for the first time since his debut in 2012.

The Belgian conceded set two, but was on the verge of regaining the advantage when he committed a cardinal sin. Huybrechts opted not to go for the bull on 83 with Humphries sat on a finish, and ‘Cool Hand’ duly took out 143 for a huge turning point in the match.

Huybrechts never looked the same and 10 180s from Humphries helped him to a second consecutive World Championship quarter-final, meaning 67% of his ranking money now comes from his very successful visits to North London.

Unlike his first two matches, Adrian Lewis started the better of the two players against Dimitri Van den Bergh, leading 2-0 after two 3-1 sets in his favour.

A scrappy third went the way of ‘The Dream Maker’, but Lewis showed his class to re-establish a 3-1 lead immediately.

Two-time World Youth Champion Van den Bergh then produced an inspired set to claw back within one before doing similar in set six, never letting ‘Jackpot’ close within a leg of the match.

Van den Bergh’s timing and one-dart finishing was proving crucial in the closing stages, and he used it to full effect as he won a third consecutive set 3-1 to seal a quarter-final date with Nathan Aspinall.

Peter Wright stormed into a 3-0 lead against Jeffrey de Zwaan in the first game of the evening session, with the Dutchman failing to find the sensational form that saw him beat Dave Chisnall in the previous round.

‘Snakebite’ seemed to be sailing through in contrast to his first two games, but his form suddenly dipped and De Zwaan got himself back into the match without much of a notable increase in performance.

All of a sudden Wright was in trouble again and despite a much improved sixth set, winning legs in 12 and 13 darts, there was nothing he could do to stop the Dutchman holding throw in all three of his legs to force a deciding set.

Unlike the pattern of the match, the final set was more nip and tuck, the players trading the first four legs to force Wright’s second tiebreak of the event.

Three comfortable holds followed, before the Scotsman capitalised on a poor leg from De Zwaan to win the final set 5-3 and book a first World Championship quarter-final for three years.

Chris Dobey failed to produce the sensational scoring that saw him beat Fallon Sherrock on Friday, but it didn’t matter as he found himself on the verge of a 2-1 set lead against Glen Durrant.

However, ‘Duzza’ turned it around, surviving several set darts from Dobey before doing the exact same in set four to lead 3-1.

Dobey’s form picked up in the next two sets despite an anomalous 26-darter as the World Grand Prix semi-finalist gave us another deciding set, but he never really got going.

Durrant rolled off three straight legs and won the match with a 146 checkout and a 12-darter to progress through to a meeting with Gerwyn Price or Simon Whitlock.

Whitlock missed three darts to win the first set, which Price took before a crucial 108 checkout gave him the second set 3-1. It was an uninspiring game, but the following four sets all went with the darts to hand Price a first World Championship quarter-final despite him being nowhere near his best.