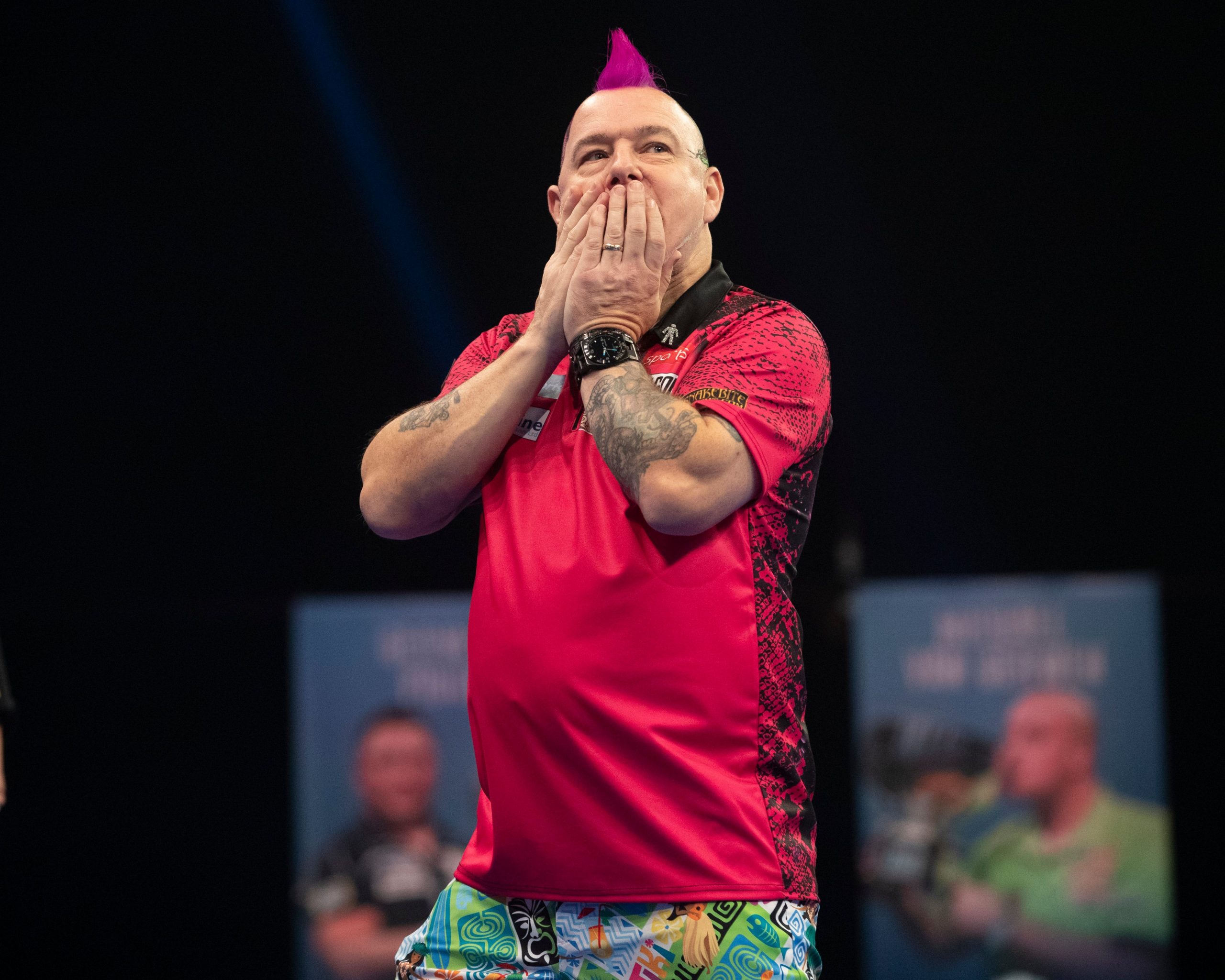 Thursday night saw the conclusion of the group stages at the unique tournament. With Van Gerwen the only person to have qualified from the last four groups before play started, it made for an interesting night of darts.

De Sousa fired in a barrage of maximums in his comfortable 5-1 win over four-time women’s world champion Lisa Ashton in the opening match of the night.

Ashton only had one dart at a double and duly converted, however, Portugal’s De Sousa showed why he has been one of the most impressive players on the circuit over the previous few months.

The most eagerly awaited match of the night was arguably between Michael Smith and Krzysztof Ratajski. The complexities of the round robin format meant that both players were not yet through to the knockout stages.

The opening four legs were shared in a frantic start to the match and ‘Bully Boy’ took the ascendency with a straightforward 71 checkout to lead 3-2. Smith pulled away and won the last two legs to join De Sousa in qualifying from Group C.

Elsewhere on the night, Ian White thrashed Dirk van Duijvenbode 5-1 in what was a game bursting with quality. White saved his best performance of the week until last, hitting 100 percent of his doubles to dispatch the Dutchman.

White’s emphatic victory was enough to see him through to the second round, with the biggest shock of the evening involving world champion Wright failing to make it out of his group at the hands of Devon Peterson.

‘Snakebite’ was never at the races throughout the encounter and the South African took full control to race into a 4-1 lead. Wright had it all to do and clawed a leg back, but it was to prove pointless as Peterson hit double 16 to close the match out and confine Wright to an early exit.

Meanwhile in Group G, Jonny Clayton comfortably raced into a 3-0 lead against Mikuru Suzuki, hitting three out of three on the doubles, with the Welshman putting his Japanese opponent under severe pressure from the off.

Reigning women’s world champion Suzuki was already out of the tournament so this was effectively a dead rubber for her, and Clayton took full advantage of her flat performance to win in whitewash fashion, in what proved to be one of his most effortless performances in recent weeks.

Many thought Price would have it easy against Ryan Joyce in the deciding match of Group G, but in reality it was an entertaining tussle which ebbed and flowed, with three ton-plus finishes in the first four legs setting the standard.

The best was yet to come as Joyce took out a marvellous 107 to put him within touching distance of qualifying for the last 16 leading 4-2. A Price fightback set up a deciding leg in which he duly won, hitting double tops to seal a remarkable comeback in what was a scintillating encounter.

Michael van Gerwen had already secured his spot in the knockout rounds through Group A, so it was left for the other three players to fight over the last remaining spot. First up was the match between Adam Hunt and Gabriel Clemens.

Clemens began brightly by breaking throw in the first leg, before opening up a two-leg advantage, meaning Hunt couldn’t afford to drop another leg if he was to keep his hopes intact.

Nevertheless, Hunt fought back superbly, winning the proceeding five legs on the bounce to give himself some breathing space and a chance to still qualify for the next round.

Afterwards, Joe Cullen gave it everything against the world number one and was so close to making it through.

The recent International Darts Open champion needed to win four legs to set up a second round tie against Simon Whitlock, but multiple missed darts at double in a careless eighth leg saw his hopes fade away.

Van Gerwen took advantage of this and converted a routine 36 checkout to win 5-3. Cullen will be devastated at coming agonisingly close to escaping the group stage.

The Grand Slam of Darts continues on Friday evening in Coventry, with second round action taking place across the coming two days at the Ricoh Arena.

With some intriguing matchups over the weekend, especially a mouth-watering clash between Van Gerwen and Anderson, a darting feast is in store, let’s hope it lives up to the billing.

Here's the complete group tables as the Last 16 is decided in the 2020 @BoyleSports Grand Slam of Darts… pic.twitter.com/bcbdTTY04r