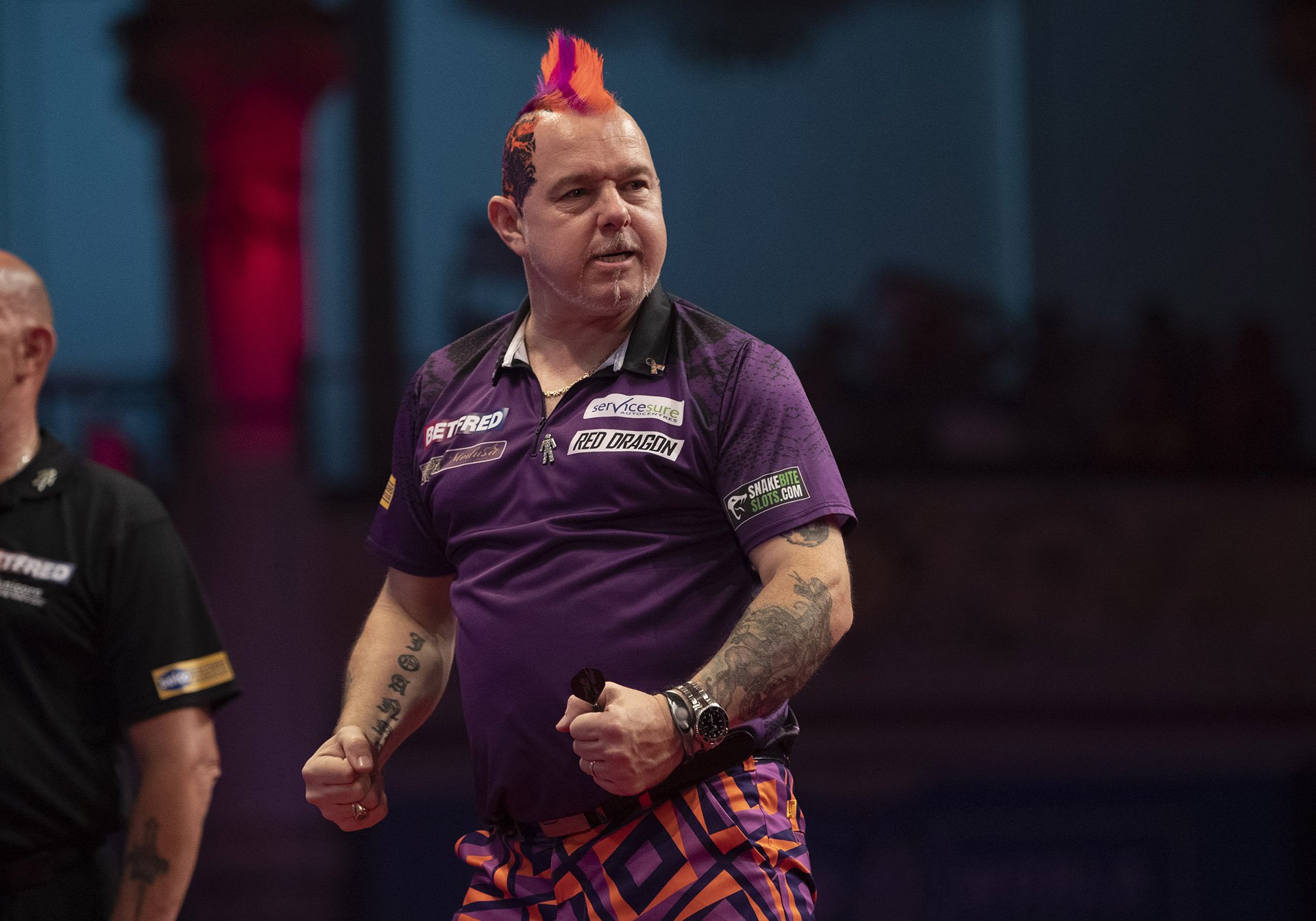 Peter Wright lived up to his billing as one of the favourites to lift the Phil Taylor Trophy next Sunday as he averaged 102 in a 10-5 win over Vincent van der Voort, with Keegan Brown, Simon Whitlock and Jonny Clayton also progressing to the second round of the 2019 World Matchplay at the Winter Gardens in Blackpool.

There were plenty of upsets in the opening two days of the PDC’s second biggest event, with the likes of Gerwyn Price, Nathan Aspinall and Dave Chisnall all falling by the wayside. Monday’s final four first round match-ups got underway with a closely-matched battle between two in form players in Jonny Clayton and Keegan Brown. A sublime start to the game saw ‘The Ferret’ finish 101 and his English opponent take out 148 to reply immediately.

However, it was the Welshman who took the advantage into the first break and was yet to miss a double at that point. The high quality darts continued with the next three legs all won in 15 darts or less, continuing the pattern of the opening stages with the scoreline at 4-4. The following trio of legs all went with throw, before Clayton produced a 14-darter on a lacklustre Brown leg to seize a significant lead.

Despite that, the three-time PDC ranking event winner failed to get below 100 with 18 darts in the next leg, allowing ‘The Needle’ to break straight back, before he found a huge 127 outshot to level once more, a moment which turned out to be the turning point in the match. Clayton missed a dart for a 116 finish and a 9-8 lead, and Brown punished admirably again with a 109 checkout. It seemed to be heading for the fourth extra time period of the tournament with the former Austrian Darts Open champion leaving double 14 after 12 darts.

However, Brown found a 174 out of nowhere and ‘The Ferret’ buckled under the pressure, allowing the man from the Isle of Wight to win on the Winter Gardens stage for the first time since 2015. The next match was also set to be a tight affair, and the first session lived up to that with all five legs between Simon Whitlock and John Henderson going with throw, not without some high quality stuff in there as well.

‘The Wizard’ notched the first break of the game, but a sensational brace of 11-darters from the Huntly man got him back level, looking virtually faultless on the doubles. He carried that momentum into the final period with an immediate break, but Whitlock reeled off four consecutive legs out of nowhere really, including an 11-darter and a 12-darter to go within one. The match continued to ebb and flow, with ‘The Highlander’ winning the next two in style, but the Australian broke in the eighteenth leg after surviving darts from Henderson to send it all the way.

Simon Whitlock is into the second round in Blackpool for the third year running, and he was joined by Daryl Gurney after a hard-fought win against Matchplay debutant Ricky Evans. A solid start from the 2017 semi-finalist saw him into a 2-0 lead, but he squandered six darts to guarantee a lead into the first break at 3-1, allowing ‘Rapid’ to steal a second leg. However, the Northern Irishman regained focus quickly and found himself 6-3 ahead after two breaks of throw.

A 12-darter in the twelfth leg kept himself comfortably in control, but Evans managed to put some doubt in Gurney’s mind with a 85 finish to get one of the breaks back. It went to waste, though, when the Kettering star started 46, 96, 58 in a leg he really needed to win, letting the Northern Irishman go within one at 9-7. A 15-darter was enough for Gurney to progress to a Wednesday meeting with Keegan Brown.

Recent German Darts Master and double Players Championship event winner Peter Wright started in the form which got him those titles against Vincent van der Voort, averaging over 100 early on. However, he found himself 2-0 down to an even better performance from the Dutchman, who did brilliantly to qualify for Blackpool for the first time in 3 years. The third leg saw a game-changing 164 checkout from the Scotsman, though, and he never really looked back, taking a 3-2 advantage as they left the stage.

The second session saw five consecutive holds of throw, before a 180 start from Wright on the throw of The Dutch Destroyer got him the breakthrough he needed, as he finished in 16 darts to lead 8-5. He eventually stumbled over the finish line but still ended with an average of over 102, another brilliant display from the former UK Open champion, who looks in very dangerous form as he hopes to continue to extend his now 19-game unbeaten run.

The last 16 line-up is now set at the World Matchplay, and it commences on Tuesday evening with Michael van Gerwen v Glen Durrant, the battle of world champions, headlining the action, especially after ‘Duzza’ won 7-2 in their first meeting recently. Elsewhere, Michael Smith plays Max Hopp, Gary Anderson takes on Mervyn King, and there is a mouth-watering clash between James Wade and Mensur Suljović.