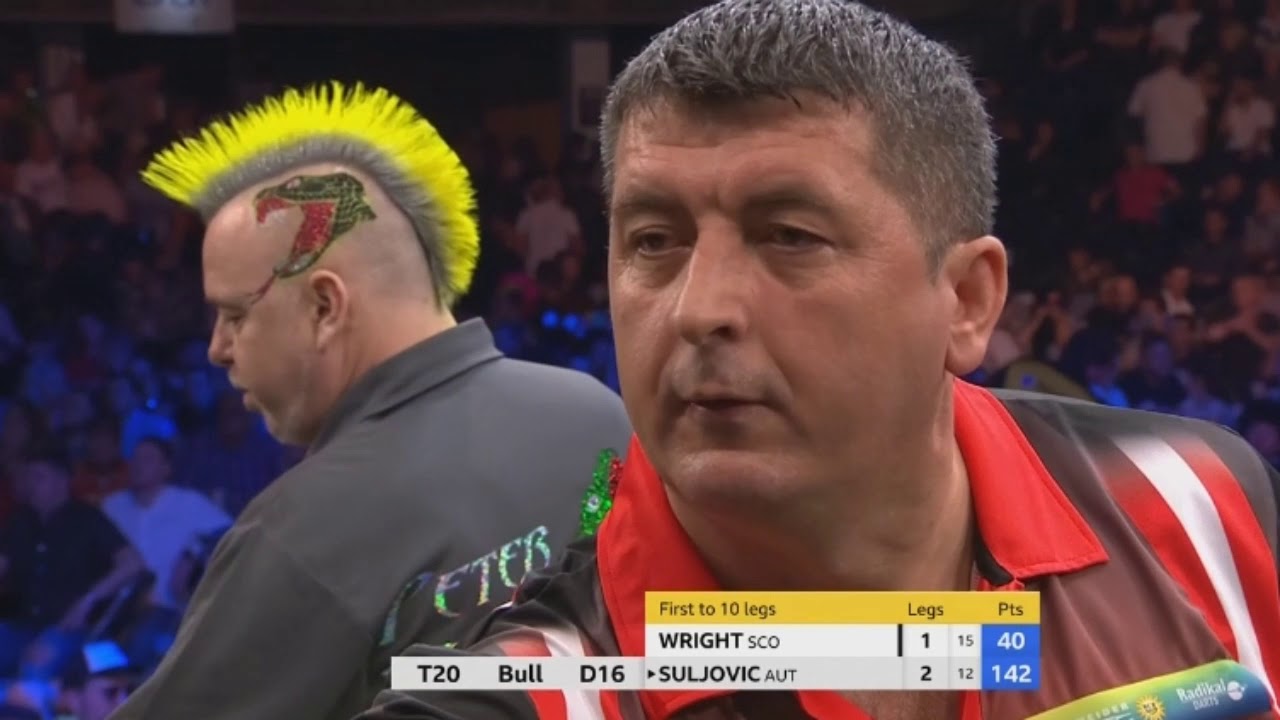 By the time many of you read this, it will all be over.

Although it’s still a long time from the end of the Premier League, we have reached the first really critical moment, the very aptly named, Judgement Night!

Gerwyn Price has already gone and to be fair to him, it was a baptism of fire and he was up against it from the start, being the lowest ranked player and having played fewer seasons on the circuit than most of the others.

So that was perhaps always going to happen. Many of us hope he is back next year, or at some point in the future, a stronger and wiser player.

What was not always going to happen, was Peter Wright falling at the same first hurdle.

Everybody has spells where they don’t hit top form. Even MVG, although in truth for him this only really means losing in finals, or semis, as opposed to virtually propping up the table.

But the very thought that tonight, Peter Snakebite Wright, could play his last game in the Premier League 2018, is rather sobering, even for those who don’t even root for him. Sport needs consistency as well as surprise, and when the mighty fall, it can be quite a shock.

This does not mean to say that I want Mensur Suljovic to exit the tournament either. In fact, as a darts fan, I don’t really claim a favourite player unless I am prompted to (which turns out mostly to be Peter Wright) so provided the play is good, and given that somebody always has to lose, I can enjoy it all the same. The Prem will go on, whoever exits it tonight.

The event this evening promises so much, and surely cannot fail to deliver.

If there has to be any game here which doesn’t match the hype, it would be Whitlock Price, with the latter already being on his way out. But The Wizard will want to make the Top 4 and will know that the result should not be taken for granted. We can expect some high scoring and finishing, guaranteed.

RVB has not shown himself at his best this year while Bully Boy has, and although this one is difficult to call, as long as Smith has some chance of topping the table, and before he is guaranteed to finish Top 4, he will be doing all he can to put points on the board. Can RVB match him? My feeling is no, not tonight.

Gary and Voltage (hey, if we had the 80s all over again I would form a pop group and name it just that) is hardly a grudge match but by now is it beginning to rile Cross that people remind him of his never having beaten the Flying Scotsman? Can’t blame him if so, nor for trying to put it straight. At the same time, Anderson, though I can’t say he will attach much importance to that particular stat, is close to the bottom 6 and needs to keep going in order to get into the final stages. Both players have the game to win this, it depends on who is more up for it, and they both seem to have an almost equal claim to needing the points.

And can Mensur really get past van Gerwen? Can Liverpool really dispatch Man City in style? One of those is a no, the other a yes. It pains me to say it, but I don’t think Suljovic is good enough to beat MVG where the latter turns up anywhere near his best. Anything can happen in sport, within reason, Liverpool can even dispatch Man City in style, so he has his chances, but he has to take them. If Mensur does not both average a ton plus AND over 50% of his doubles, I fear for him tonight.

Which will ultimately render the last game an anti-climax, potentially. If Suljovic is already out it will take the pressure off Peter Wright, who I believe when under the cosh is probably always going to win (except playing van Gerwen) because he seems to respond well to pressure.

And this could be his undoing. An on-form Snakebite could win the rest of his games in this campaign, certainly if he really needs to. If come the opening leg tonight he already doesn’t need to win, he may not, which will ultimately mean that while he carries on in the tournament for now, he doesn’t make the Top 4.

I won’t detail exactly what I predict, for I have done that at the excellent Fantasy Darts website, which you will love to check out if you are not already playing. However, in a nutshell, I think Mensur’s result will make the evening more relaxed for Peter Wright, which could potentially catch up with him towards summer.

Photo Courtesy of You Tube