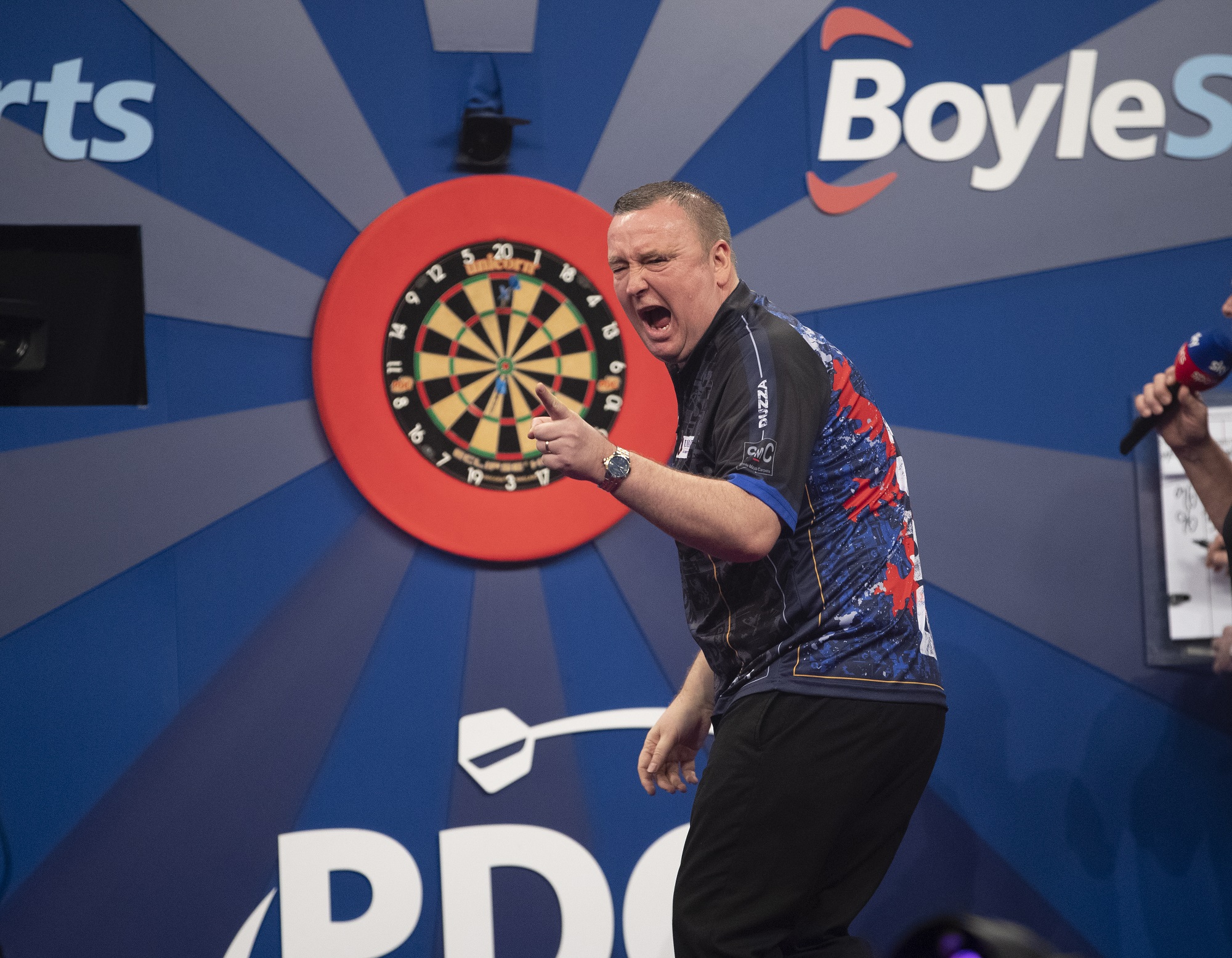 Wright Too Hot For Cross, Duzza Comes Through Thriller

Day five of the BoyleSports Grand Slam of Darts at the Aldersley Leisure Village in Wolverhampton saw some high quality contests.

Peter Wright was in ruthless form, and fired out a warning to his tournament rivals, with a 10-3 demolition of current World Matchplay Champion Rob Cross.

“Snakebite” cruised into a 5-2 lead averaging 108, and never looked likely to led his lead slip. A 102 checkout made it 6-2, and Wright then eased over the line, finishing with a 98.5 average to reach the quarter finals.

There he will meet Dave Chisnall, who enjoyed a similar romp to Wright by crushing surprise package of the tournament, Ryan Harrington, 10-3.

“Chizzy stormed into a 4-0 lead, with Harrington getting off the mark before the first break with a 154 checkout.

The St Helens man went 7-1 up, and despite Harrington averaging 98, he was powerless to stop his slide towards the exit door, although he did clinch back to back legs to make the score 7-3.

In the end a 102 average was good enough for Chisnall, setting up a mouth watering meeting with Wright in the last eight.

In a Grand Slam classic, Glen Durrant used all of his doggedness and determination to catch up with Gabriel Clemens, snatching a 10-9 win from the jaws of defeat.

The German raced into a 3-0 lead, but “Duzza” managed to hang on to his coat tails at the break, trailing 3-2 with a majestic 132 finish on the bull.

Every time Durrant broke Clemens, he was broken himself, as the “German Giant” took a 7-4 lead with a 106 checkout. Durrant wasn’t finished though, and 107 and 80 finishes levelled the match at 7-7. A 97 out put Clemens back in front, and he went 9-8 up when Durrant missed the bullseye for a 164, with Gabriel nailing double eight with his last dart in hand.

Crucially though, Clemens missed one dart at tops for a 10-8 win, and the man from Middlesbrough stepped in to level. Durrant left it to the last leg of the match to lead, bossing the decider to pin double eight for a famous victory.

In the quarters he will renew hostilities with Michael Smith, after “Bully Boy” enjoyed a mid match surge to see off Daryl Gurney 10-7.

Gurney started the match like a house on fire, and Smith was happy to trail 3-2 at the break.

From 4-2 down, Smith reeled off four straight legs, with his efforts at tops hardly missing, with 100 and 110 checkouts along the way.

Smith stretched his lead to 8-5, but Gurney managed to claw his way back into the contest with back to back legs to move within a leg. The turning point proved the sixteenth leg, with Gurney missing doubles to allow Smith to check out 69 to move to the brink of victory.

A power scoring leg allowed him to ease to the win, with a 101 average and 50% on the doubles to book a place in Fridays last eight.

Major WDF Tournament & Circuit In The Works For 2020