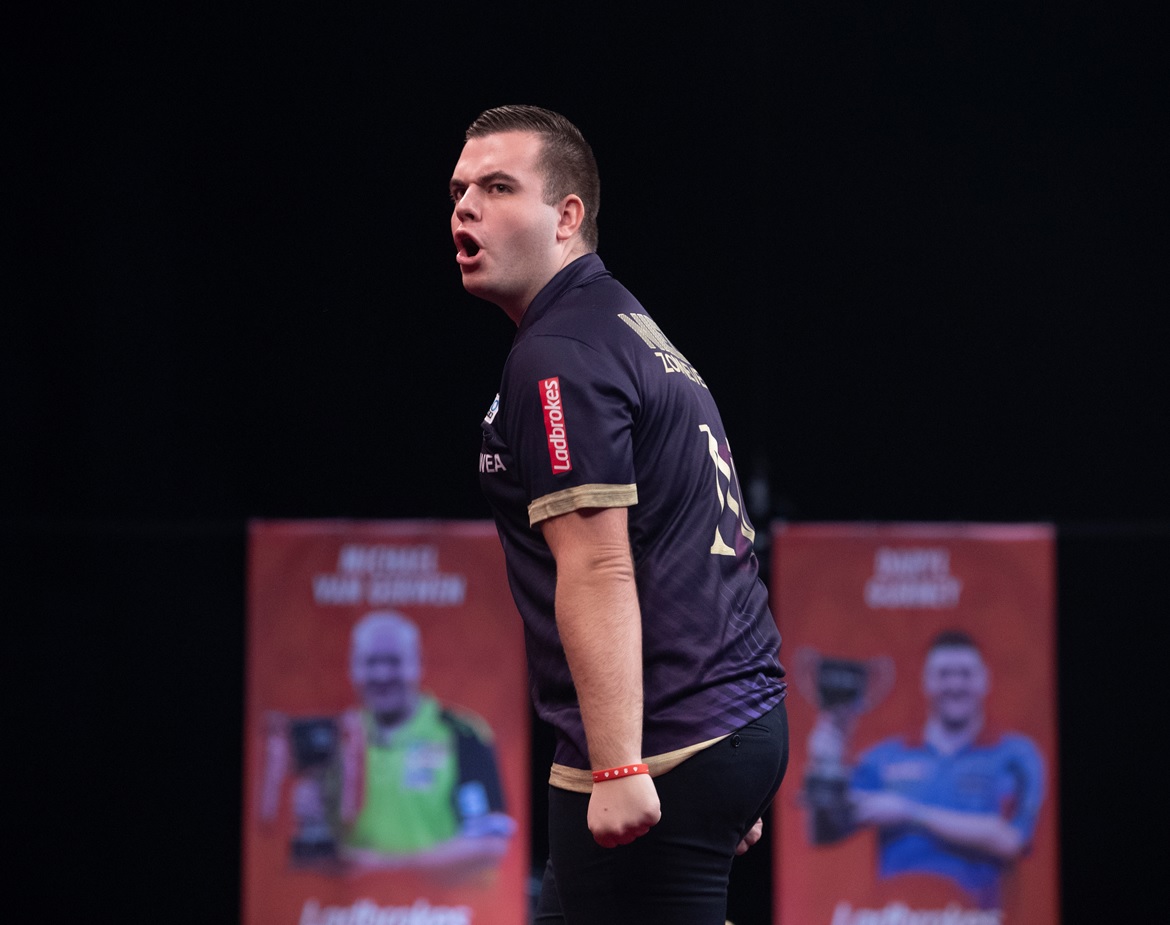 Niels Zonneveld produced the upset of the first round at the Players Championship Finals, beating James Wade 6-3 in Coventry.

Zonneveld could be coming to the end of his first spell on the ProTour, thanks in part to a positive Covid-19 test earlier this year, but the Dutch youngster played excellently to see off the Grand Slam of Darts runner-up, closing it out with a 122 finish.

Elsewhere, World Champion Peter Wright survived a scare from the impressive Ryan Meikle. ‘Snakebite’ averaged 104 and didn’t miss a single dart at double, but was pushed all the way by ‘The Barber’, who took out 167 to send it to that 11th leg.

Michael van Gerwen, the defending champion, and the man he beat in that final, Gerwyn Price, both came through fairly comfortably against Darius Labanauskas and John Henderson respectively.

Other surprising results on the opening day came from the likes of Karel Sedláček, Callan Rydz and Ryan Murray.

World number four Smith survived a big scare from the brilliant Boris Krčmar. The Croatian posted the highest losing average in Players Championship Finals history, 107.79, but it wasn’t enough to beat ‘Bully Boy’ as Smith prevailed in a deciding leg.

Cross hit six of his seven darts at doubles to beat the dangerous Jason Lowe, while Aspinall had to survive five match darts against Scott Waites.

Former champion Anderson is still struggling with a knee injury, but reeled off five straight legs to beat Keegan Brown 6-4.

Simon Whitlock and Dimitri Van den Bergh were both in impressive form in making the semi-finals last week in Coventry, but had differing fortunes on Friday.

Van den Bergh suffered defeat to a 100 average from Ryan Searle, while Whitlock continued his superb record on TV of late by beating Adrian Lewis 6-4.

It was a good day for the Dutchmen in Coventry as seven of them booked their places in the second round.

Mervyn King had the second-highest average of the last 64 as he hit eight 140s and 50 percent of his checkout attempts to secure victory against Dave Chisnall.

Premier League champion Glen Durrant displayed improved form following the Winter Series and Grand Slam, though, Wayne Jones was still too good for him, running out a 6-3 winner in his first appearance in the tournament since 2013.

Luke Woodhouse and Andy Boulton will play each other on Saturday afternoon after ‘Woody’ beat Brendan Dolan 6-4 and ‘X-Factor’ saw off Ryan Joyce 6-4, both on Stage Two.

There were 6-1 wins for Ross Smith, Damon Heta and Jermaine Wattimena, while Luke Humphries came through a thriller against South African ace Devon Petersen.

Gabriel Clemens and Martijn Kleermaker also provided a high-quality contest, which ‘The German Giant’ edged to set up a meeting with Ian White, who beat young Scotsman William Borland by six legs to four.

Finally, there were victories for Joe Cullen and Jonny Clayton, with those two facing former world champions in Cross and Van Gerwen respectively in round two.

The second round takes place across two sessions on Saturday at Coventry’s Ricoh Arena, with coverage from both boards once again being broadcast throughout the day.